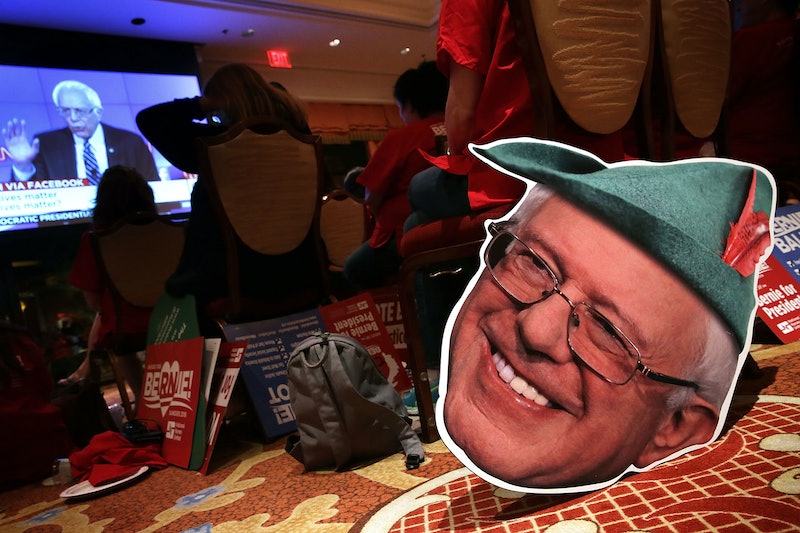 One of the best holidays out there has been made even better thanks to the 2016 election. Halloween can either be a quiet celebration of all that's spooky set to a fine meal of fun-sized candy bars and The Rocky Horror Picture Show or it can be the political party of a lifetime. With a full 19 candidates currently setting their sights on the Oval Office, costume ideas are plentiful. These 21 clever election Halloween costumes will make you a hit at even the most conservative of parties.Whether you're a politics junkie or only passively following the news, this primary election has been one of the most talked about in recent memory. Donald Trump wants to "make America great" and has the hat to prove it, Jeb Bush can't stop turning his name into an onomatopoeia, and Bernie Sanders is sick and tired of Hillary Clinton's damn email scandal. All of these things would make for clever costumes far more creative than your average Ronald Reagan or Bill Clinton rubber mask. Adding a bit of DIY into the mix will make certain you're not stuck in the same Sexy Donald Trump Costume as someone else because one such outfit is definitely more than enough.

Bernie Sanders and, well, the entire Democratic Party may be tired of Hillary Clinton's email scandal, but social media simply can't get enough of his use of the phrase "damn emails." Turn that feisty Sanders energy into a physical manifestation with your very own Damn Emails costume.

The character who truly stole the show of the first Democratic debate was Hippie Santa. Clad in a tasteful blue shirt with Tolkien-esque nature scene only slightly obscured by his beard, Hippie Santa

South Carolina Sen. Lindsey Graham may not have a sour feeling about his chances in the GOP presidential race, but that doesn't mean the low-polling candidate can't make for a sweet Halloween costume. Get a bit punny with your election costume while also celebrating the only bachelor presidential hopeful.

America finally got to meet Rhode Island political superstar Lincoln Chafee, whose experience serving on the civic and gubernatorial level could help him greatly. A multi-faceted candidate, Chafee may be more than meets the eye as a person. All throughout the first Democratic debate, viewers far and wide were wondering whether Fox News journalist Steve Doocy and Lincoln Chafee were the same person or at least related. Meld the two for a bipartisan costume like no other.

Now that Scott Walker's out of the presidential race, he's probably indulging in some much needed rest and relaxation, right? The Wisconsin governor has quite a bit of work to do it turns out. He'll be repaying his campaign debts as well as continuing to run the state. Imagine a world where Walker is blissfully out of politics instead with a Retiree Scott Walker costume.

Former President Bill Clinton did his part to support wife and Democratic front-runner Hillary Clinton during her first debate of the 2016 election, watching her performance from a hotel room near the Wynn Las Vegas. Bill looked pretty comfortable but also a bit alone. His chill debate night is your seamlessly easy Halloween costume.

Joe Biden has yet to announce his White House bid but that didn't stop CNN from setting up an emergency podium just in case the vice president showed up to the first Democratic debate of the season. If you can't be the candidate you want to see on the Wynn Las Vegas stage, at least be the podium he would've stood behind.

One of the best parody presidential candidates happens to be waging a political war with the Governor of Louisiana, Bobby Jindal. As Jindal has set his sights on the highest office in the land, so too has a mighty crustacean revered by locals with far better polling numbers. Crawfish Crawfish also makes for an easy, clever Halloween costume you can even use for Mardi Gras.

The youngest (and therefore ineligible) candidate currently running for president also happens to have the most vulgar name. Deez Nuts is actually a 15-year-old boy from Iowa whose campaign is seeing the best numbers from an Independent candidate since Ross Perot. A Deez Nuts costume is your ticket to basking in the same kind of popularity.

O'Malley's March doesn't refer to the Democratic presidential hopeful's workout routine but rather the Celtic rock group he fronted in Baltimore and D.C. before getting knee-deep in politics. So help Martin O'Malley out and get the band back together. I mean, did you hear his brief cover of Taylor Swift's "Bad Blood"? Dude really needs a bit more instrumentation. Grab some friends and get to playing like a roving band of troubadours on the campaign trail.

The single most talked about accessory on the left just might be O'Malley's guitar. It's what kept him calm and composed before taking the stage at the first Democratic debate. He's picked up the instrument and played at campaign fundraisers around the country, turning his plea for presidency into an unofficial music tour. Turn your trick or treating into an O'Malley fest. Bonus points if you can enlist the help of a friend to be O'Malley himself.

The arguably most talked about bit of campaign swag across both parties is Donald Trump's simplistic "Make America Great Again" hat. The country clearly lost its greatness without a trucker hat revolution anchoring it. Be the headgear you want to see in the world while also having an excuse to get as boisterous as you please for one night only.

Showing support for your favorite candidate can be as simple as attending a rally or as epic as commissioning artwork, which is exactly what a giant disembodied Bernie Sanders head is. Sure, the Trump piñata made a fantastic prop (and a fairly cool costume idea) but there is no excessive accessory as simple and eye-catching as a smiling Sanders strung around your body.

There are so many ways that Chris Christie running for president is basically like daytime television, but none as explicit and simple as his campaign slogan "Telling it like it is." Give Ricky Lake, Jenny Jones, and the talk show hosts of yore a run for their money with your very own Christie program.

Now that Jim Webb has dropped out of the Democratic presidential race, he's seeking different ways to reach his audience. Webb may be mulling an Independent candidacy, but we all know it's way more fun to be Jim Webb, author, than Jim Webb, failed presidential contender twice over.

Fellow 2016 election dropout Rick Perry sure knows how to live it up. With a freer schedule, the former governor of Texas has had time to complete a road trip across the southwest and thoroughly chill out. If anything, a retired Rick Perry costume may win the nomination for most relaxed outfit on the planet.

The only thing more larger than life onstage during the second GOP debate — and aside from Donald Trump's own ego — was the Ronald Reagan Air Force One plane serving as the event's backdrop. The Boeing 707 is now your ideal Halloween costume. Bonus points if you start reciting candidate closing speeches while wearing it.

There's a conspiracy afoot that, for all his campaign earnings, Ted Cruz somehow can't afford properly fitting clothes. Every outfit he wears no matter how formal or casual seems to have been tailored for Cruz's older brother or someone with an iron, which is yet another thing the Texas senator seems to be missing. Pop some tags and grab something tacky.

Who knew that Ted Cruz had something in common with UPS? The GOP presidential hopeful's campaign store carries a lone bumper sticker with the clever "this vehicle makes right turns only" slogan. It turns out that UPS has been doing exactly that for years. Sometimes the mail delivery service slips up for the sake of efficiency but otherwise the company claims that they're reducing risks and saving gas. Combine the exhilaration of delivering mail with the inanity of a potential Ted Cruz presidency by being Ted Cruz Control for Halloween.

It was inevitable that, of all the punny candidate swag out there, Marco Rubio would cash in on the "Marco" polo. The Florida senator's semi-casual wear could always be taken further, however. Why not combine the style of a collared shirt with the innovative vision of Italian explorer Marco Polo?

Jeb Bush might just have the simplest logo in the entire 2016 election cycle. Choosing to cut his last name from the design, the GOP hopeful chose an eye-pleasing font and tacked an exclamation onto the end of his first name. Thus, "Jeb!" was born. Get just as pumped for yet another Bush presidency as Jeb's parents undoubtedly are with an exclamation point-heavy Jeb! costume.

And if you still can't make up your mind on Halloween, kick back and learn about what not to dress as...