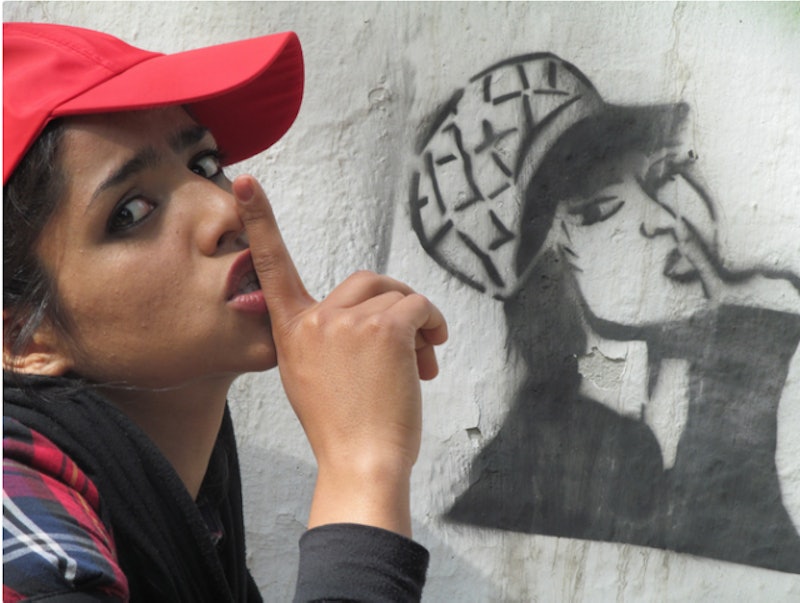 The first time 19-year-old Sonita Alizadeh's parents tried to sell her into marriage, she was 10 years old. "I wasn’t sad because I didn’t know what they were talking about," Sonita remembered during an interview at the Women in the World conference this October. In fact, she thought it was like playing a dress-up game, and at first she was happy about it. "It was the first time [my parents] focused on me and they bought me new clothes."

That marriage didn't end up going through, but as she grew older, Sonita learned to fear the marriage that was still awaiting her. And she wasn't alone in that fear: According to the Afghanistan Independent Human Rights Commission, at least 15 percent of Afghan girls are married before the age of 15. Roughly 60 to 80 percent of child marriages in Afghanistan are forced (though you could argue that any girl under 18 would be too young to truly consent).

"When my mother told me they [would] have to sell me, my heart broke down. Again, I realized against my brother, I have no value."

Sonita's family had moved to Iran when she was eight, fleeing the war that raged in Afghanistan. Since she didn't have a legal ID, Sonita couldn't go to school, and instead cleaned bathrooms at an NGO, which taught her how to read and write. That's when she started writing poetry — and listening to hip hop. The first rapper she remembers hearing? Eminem. Even though she didn't understand his lyrics, when she heard the music, Sonita realized she could tell her own story— and started writing songs of her own. She struggled to find studio space; in Iran, it is illegal for a woman to sing without special permission from the government. But with the help of a few rebellious producers, she started recording.

But when her mother (who was by then back in Afghanistan) visited her in Tehran after not seeing her for three years, Sonita realized she had ulterior motives. She told Sonita, then 16, that she needed to come back to Afghanistan — her brother needed a $7,000 dowry for a bride, and the family could get $9,000 for selling Sonita into marriage. She was devastated.

"I couldn’t breathe. I couldn’t speak," Sonita said. "When my mother told me they [would] have to sell me, my heart broke down. Again, I realized against my brother, I have no value. And they couldn’t understand me ... It was an experience of death." But Sonita refused to go back with her mother and be sold, and dealt with her grief the only way she knew how: with music.

"One of my friends, she was sitting next to me, and she had bruises on her face. She was quiet and she didn’t say anything. When I looked at her, I imagine[d] that music video in my mind."

"I realized [I could] tell my story with rap," Sonita said. Inspiration struck when she was sitting around talking with her friends about hip hop, and how they thought music videos should be. "One of my friends, she was sitting next to me, and she had bruises on her face. She was quiet and she didn’t say anything. When I looked at her, I imagine[d] that music video in my mind." Sonita realized she wanted to tell her story. So she wrote the song "Brides for Sale" and made a video for it which will give you chills. (This one's translated, so seriously, watch it.)

After Sonita posted the video to YouTube, she turned off her cellphone for two days. She was terrified about what her mother would say. After all, her mother had said that to be a singer — her dream — was to shame herself. But when the video went viral and was shown on Afghan TV, she turned on her phone, and her mother called her with a surprise. "She said it was good. She didn’t say, 'Wow, it’s very good. I’m proud of you.' She didn’t show me so much emotion, but for me it was a big change in my life."

In 2014, Sonita had another big break: She won a competition to write an anthem to get voters in Afghanistan to the polls. Her prize? $1,000. She was finally able to show her parents that she could contribute to her household without a man's support. Shortly thereafter, she was offered a full scholarship to study music at Wasatch Academy in the United States. Without telling her parents, she accepted the offer and escaped being sold into marriage once and for all. Now, Sonita continues to make music, and to campaign against child marriage.

Sonita credits her friends, her music, and her vision for her own future with giving her strength. "When my mother made a decision to sell me, I didn’t give up because I had designed a shiny future in my mind for myself. And I couldn’t believe I have to forget my dream. I couldn’t believe instead of being a strong woman I should be a woman who had to stay at home to raise some children."

After everything she's been through, you'd think Sonita would resent her mother, but she doesn't. Instead, she understands how her mother was herself stuck in the same cycle of oppression. “My mother was 13 when she was married,” Sonita said. “Everyone had told her that she was a woman and had no value. This is what her family has told her and that is what she believed. My music was a nightmare for her. Now, she is one of my biggest fans.”

A new documentary about her amazing life, Sonita, will premiere at the International Documentary Film Festival in Amsterdam next month.

Watch Sonita's inspiring Women in the World interview in full below.