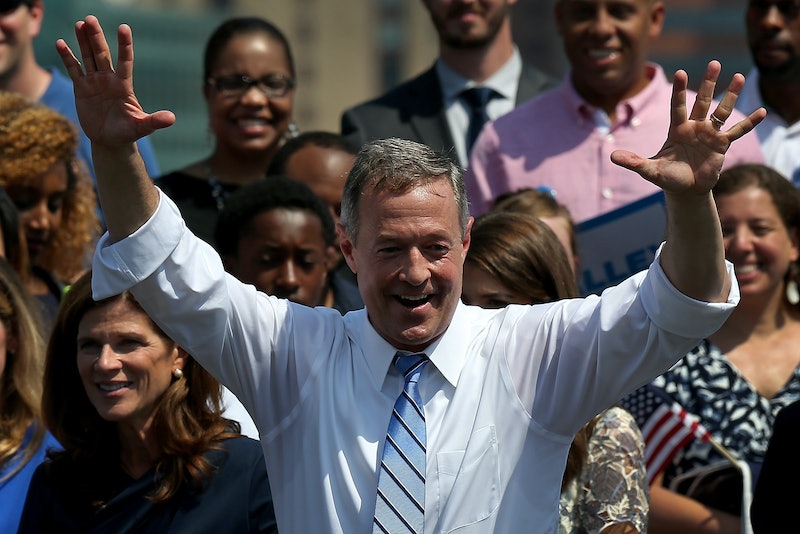 When watching him during the Democratic presidential debate Tuesday night, you might have noticed how natural Martin O'Malley felt on stage. He seemed to command the audience, and relished the spotlight so much that he could have whipped out a guitar for a solo at any moment. Well, you wouldn't have been too far off, because O'Malley has had a Celtic rock band, O'Malley's March, since the late '80s. Though O'Malley's March doesn't play regularly anymore, their legacy has fortunately been documented online. If you recently took notice of O'Malley's stellar performance during the debate, then you should acquaint yourself with his rock star side. And if you've been a staunch supporter of the former governor for years, then take a trip down memory lane with some of O'Malley's March's best hits.

For decades, O'Malley has been politicking by day and shredding on stage at night. Founded in 1988, O'Malley's March features the presidential candidate in multiple roles: singer, guitar player, and banjo player. You think that's multi-talented? Over the years, O'Malley has also been known to dabble in the Irish drum, the harmonica, the tin whistle, and even the bagpipes. At the height of the band's success during the early aughts, O'Malley's March played regularly at bars around Baltimore, where its frontman also happened to be mayor at the time.

Are you thinking what I'm thinking? Regular White House jam sessions on the South Lawn. Besides his tenacity in fighting for gun control, that's clearly the main reason you should vote for O'Malley.

But if you need more convincing, then just watch the man in action. These eight videos will make you feel like you're at an O'Malley's March concert. Be warned: You will crave a Guinness.

Paying homage to his Irish roots and to his city on St. Patrick's Day.

At The Avalon Theatre In Maryland

That is the voice of a commander-in-chief.

How cool would it be if our next president was a Pogues fan?

O'Malley channeled his political side and gave a brief history lesson on the War of 1812 to the crowd.

At The Irish Festival

How do you listen to this and not want to do a jig?

O'Malley's rendition of the Johnny Cash classic will give you goosebumps.

Playing At A Classic Irish Pub

Can a candidate be more populist when he's got a pint of Guinness in his hand?

That Muscle Tee, Though

Can he please control those guns?