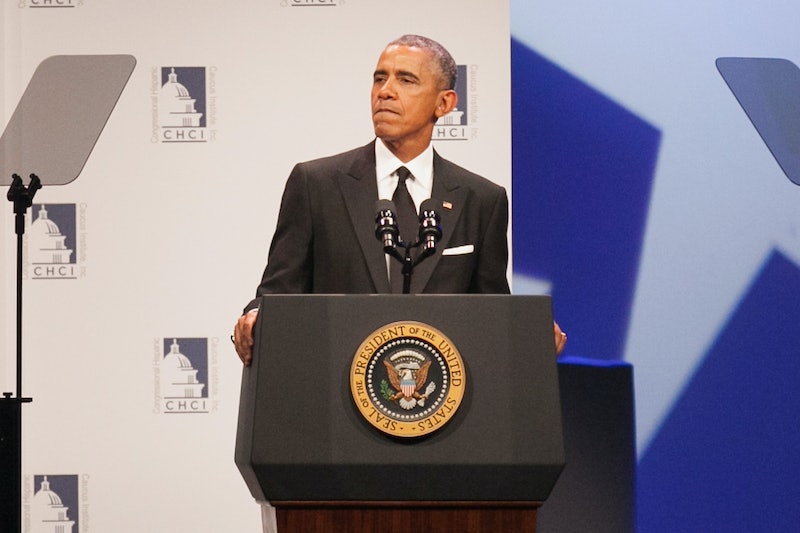 President Barack Obama announced Thursday that the remaining U.S. troops in Afghanistan will stay well into 2017. The new White House plan will see the remaining 9,800 troops drop down to 5,500 by early 2017, and it's unclear when, if ever, all of the troops will return to the U.S. This is the most recent delay of the administration's promise that all troops placed in Afghanistan would return home on Obama's watch — a promise the president made as early as his first term in office. Is the delay understandable? Well, it depends how you look at it.

Before he made the decision to continue U.S. involvement in the 14-year conflict, Obama consulted Afghanistan's president, Ashraf Ghani, the nation's CEO, Abdullah Abdullah, his national security team, and U.S. military commanders on the ground in Afghanistan. The decision resulted from the Taliban's recent and brief seizure of Kunduz last month, and the group's control of large parts of the Afghan countryside. The Obama administration told reporters that it was also worried about Islamic State fighters moving into the country and recruiting members of the Taliban. The U.S. forces will be stationed in four locations: Kabul, Bagram, Jalalabad, and Kandahar.

Speaking at the White House Thursday, Obama said Afghan security forces are "fully responsible for securing their country," but that the U.S. does not want progress there to be undone by terrorist groups looming in the country and surrounding nations:

While America's combat mission in Afghanistan may be over, our commitment to Afghanistan and and its people endures. As commander in chief, I will not allow Afghanistan to be used as a safe haven for terrorists to attack our nation again.

This is the second time this year that Obama has announced a delay in the troops' removal. In March, he said he planned to reduce U.S. forces in Afghanistan to 5,500 military personnel by the end of the year. By the end of 2016, he promised an "embassy-only" presence. In September 2012, Obama had promised to remove all U.S. troops from Afghanistan by 2014. There's also 2007 news footage of Obama saying that if U.S. troops aren't out of Afghanistan by the time he is president, he will make it one of his first actions as president to "bring an end to this war."

Now, Obama's promise will have to be addressed by whomever is elected in 2016. U.S. involvement in Afghanistan wasn't mentioned at all by Democratic candidates during the Democratic debate Tuesday night, and it was only briefly mentioned during the Republican debates, when everyone but Kentucky Sen. Rand Paul said they would put more boots on the ground in the Middle East.

It will be interesting to see how the candidates respond to the possibility that one of them will become the third U.S. president to continue U.S. involvement in Afghanistan.