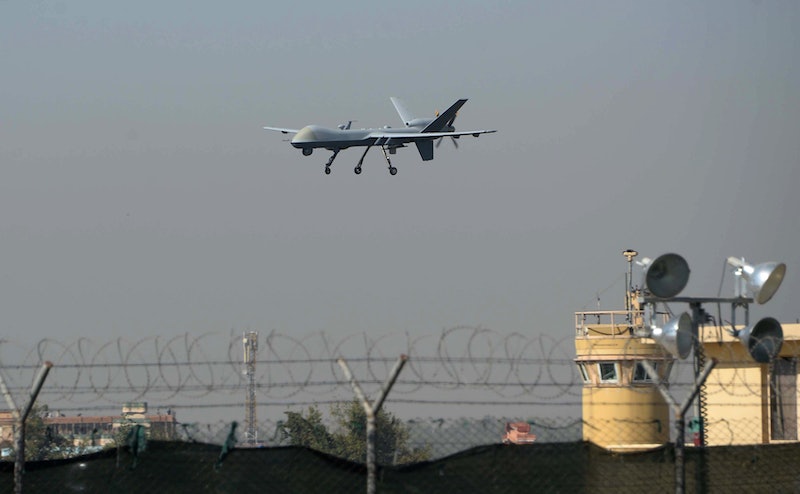 On Thursday morning, The Intercept published a collection of secret government documents that contain information about the U.S. military's assassination program in Afghanistan, Yemen, and Somalia. The cache of documents, which were provided by a whistleblower, are being referred to as the Drone Papers, and they contain shocking information about the U.S. military's actions in these countries. The contents of the documents are perhaps difficult to read and absorb, but we all should learn the new information the Drone Papers contain.

The papers offer an unprecedented depth of information surrounding the Obama administration's use of drones, and the process by which they are deployed. They also reveal new information about civilian causalities that have occurred during the U.S.'s war in Afghanistan. Focusing on Afghanistan, Yemen, and Somalia, the Drone Papers offer a look inside the U.S. military that has not been available in the past. No one from the administration provided comment to The Intercept during their research, which is typical. The president has remained virtually silent on the issue of drone use.

Here is some of the new information uncovered by The Intercept from the secret documents.

The Drone Papers revealed new information about how the government labels unintended targets of drone strikes. The whistleblower who provided the documents told The Intercept that such victims are listed as "enemies killed in action" (EKIA), and their designation would remain as such unless evidence was found that proved they were not terrorists or "unlawful enemy combatants." The source further stated that the figures the government releases about unintended killings during drone strikes are either heavily minimized or complete lies.

Most compellingly, the documents reveal that up to 90 percent of deaths from drone strikes are not the targets of the strikes; meaning that as many as nine out of 10 people killed by drones may not be terrorists or dangerous combatants.

Included in the documents that The Intercept received were slides detailing "the kill chain," or the bureaucratic process leading up to a military assassination strike. The slide is from a 2013 presentation on a study of the military's assassination procedures in Yemen and Somalia. As Commander In Chief, the slides reveal that the president has approved every target for a drone strike, but not necessarily each individual strike.

The approval process also includes the Secretary of State (a position held by Hillary Clinton at the time of the study), the Secretary of Homeland Security, the National Security Adviser, and many other members of the cabinet, as well as the Joint Chiefs of Staff.

In 2012, a U.S. drone was deployed to kill Bilal el-Berjawi, a British-Lebanese citizen in his 20s. El-Berjawi had his U.K. citizenship revoked upon suspicion that he had relationships with senior al Qaeda members in Africa. At the same time he was stripped of his U.K. citizenship, el-Berjawi was placed on a U.S. kill list.

El-Berjawi's death was covered and reported as a drone strike when he was assassinated in 2012, but the Drone Papers reveal that the U.S. government had been keeping him under surveillance for five years using a special ops fleet that consisted of more than 24 drones, fighter jets, and other military aircraft out of East Africa. The government also used cell phone surveillance to deploy the drone that ultimately killed el-Berwaji in Somalia. None of this information was made public before the Drone Papers.

The Intercept has made searchable PDF versions of the secret documents available online for the public to read and use.