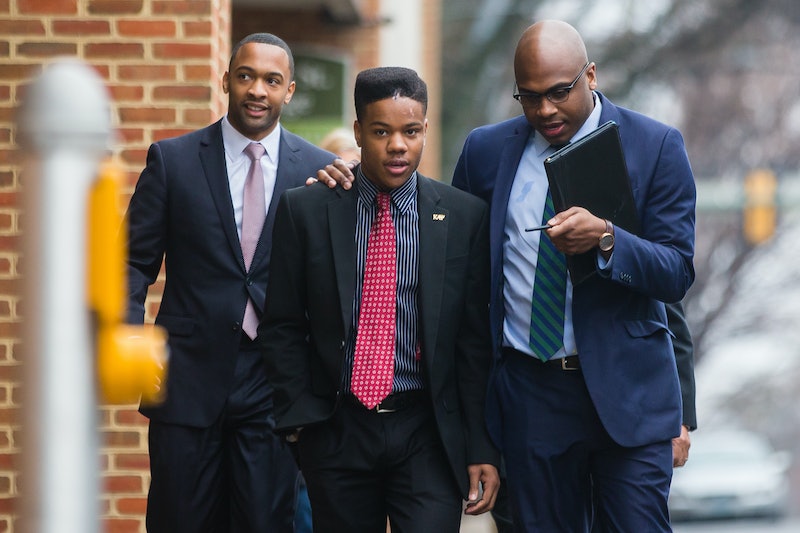 University of Virginia student Martese Johnson said he had finally made it to his "sanctuary in success" at the college after growing up in the south side of Chicago. On March 18, 2015, Johnson was out with friends and was denied entrance to a bar by a bouncer. When he retreated from the bar, three Alcoholic Beverage Control officers asked to see his ID. They assumed the ID was fake, and witness accounts of what happened next differ slightly. Johnson was pinned to the ground, gashing his head open on the way there. The entire thing was caught on film, and started yet another hashtag protesting the excessive use of police force against black people. Johnson wrote an essay on the experience that was published Wednesday in Vanity Fair, and its best quotes show how institutionalized racism is a societal problem that's much bigger than police brutality.

Though there are conflicting accounts of how Johnson ended up on the ground, both the prosecutor of the case and Johnson's attorney agreed that he wasn't doing anything wrong at the time of his arrest. That consensus, along with the gory video of Johnson's arrest, turned his name into a hashtag, mentioned alongside Tamir Rice, Rekia Boyd, and Michael Brown — just a few of the black people who have died at the hands of police in the last year. In his essay, Johnson pointed out that his name among those is unique, because unlike them, he faced police brutality and lived.

Johnson says that he has seven brothers, three of whom his mother raised on her own. This meant that the family couldn't afford the "privileges" of celebrating holidays, having a family car, or going on weekend outings. He says that these are facts many poor black communities face:

I was often told that if I just did what I was 'supposed to do' (pull up my pants, go to school, and stay out of trouble), I would one day earn a better life. Most of the young people in my community wanted better lives, too, but could not endure the poverty while following the rules of a society that had written them off at birth. We give more funding to prisons than schools, provide easier access to crippling debt than opportunity, and only offer jobs to poor communities that almost ensure mere subsistence over success. Many of my peers fell into the inescapable trap that is the U.S. prison system. I heeded the advice given to me by my elders, and was lucky enough to be among the fraction that escaped my neighborhood.

He highlights the often-ignored prejudice that exists behind our ideas of "community." For example, many of us envision a white man when we think of doctors, lawyers, or other positions of power. We do this subconsciously, and that is part of the problem. Johnson said he believes the officers were suffering from a similar subconscious bias during his arrest:

Three A.B.C. officers did what they interpreted as their duty. They hailed from an agency whose mission consists of 'protecting citizens by ensuring a safe orderly and regulated system,' but those officers’ definition of “citizens” does not include people who look like me. These officers would probably never admit to being racist, and it is because they truly believe that they are not ... The officers did not see a University of Virginia student out with his peers; they saw a young black male with a high-top fade, a gold chain, some tennis shoes, and a hoodie. In their minds, I could not possibly have been a member of the 'community' that they had sworn to protect.

Johnson says that the traditional marks of success, like a college degree or clothing, can only get black people so far when it comes to prejudice. His words are heartbreaking:

After years of working hard to change my life for the better, I realized that there were some things that would always be the same. There are no suits I can wear, words I can say, or achievements I can earn that will eliminate the centuries of fear and propaganda that have told this nation and the world that people who look like me are inherently a threat.

Then, Johnson reveals something truly horrifying about the way media cover the deaths of black people when police are involved. He says that too often, the press seems to search for a justification for a black person's death when it should be searching for the reasons police aren't better trained to non-lethally subdue suspects:

In the social-media tidal waves of police brutality, my story picked up traction. I was a University of Virginia student. I was 'honorable.' I was supposed to be 'one of the good ones.' And so my story had a plot twist. The media didn’t paint me as a weed-smoking kid with an attitude, like they were able to do posthumously to Trayvon Martin and Michael Brown. The media didn’t refer to a previous arrest record, as they did in Freddie Gray’s murder. The narrative of a smart, black, politically active University of Virginia student being brutalized by A.B.C. officers directly contrasts the story often woven to validate black lives being taken by law enforcement. My story combats this victim blaming, and that is why it outraged so many people.

Johnson suggests that police academies be more strict about whom they recruit. He also suggested reforms such as diversity and communication training, enhanced resources to prioritize "quality in policing instead of quantity," and formal positions for police and community liaisons. These are some of the many ways to address a problem that has led to more black Americans being killed in 2014 than were killed in the World Trade Center attacks of Sept. 11, 2001. Societal prejudice — the larger problem — is helping us accept these deaths:

We are experiencing a new age of genocide, aimed at the destruction of black bodies. Our ambivalence coupled with inclinations to negatively judge has allowed us to accept police brutality in America. The men and women who have committed themselves to protecting and serving our citizens have allowed cultural biases to cloud their judgment and transform them into the very 'criminals' they are tasked with pursuing. It has been too long, and we have lost too many lives to these crimes.

More like this
Chris Kaba's Family Continue Fight For Justice After Viewing Police Bodycam Footage
By Sophie McEvoy
Mel B Speaks Out Against Domestic Violence In A Powerful Speech
By Sophie McEvoy
Women Around The World Are Cutting Their Hair In Solidarity With Mahsa Amini
By Darshita Goyal
The 50 Most Powerful Characters In The Marvel Universe, Ranked
By Johnny Brayson and Nola Pfau
Get Even More From Bustle — Sign Up For The Newsletter