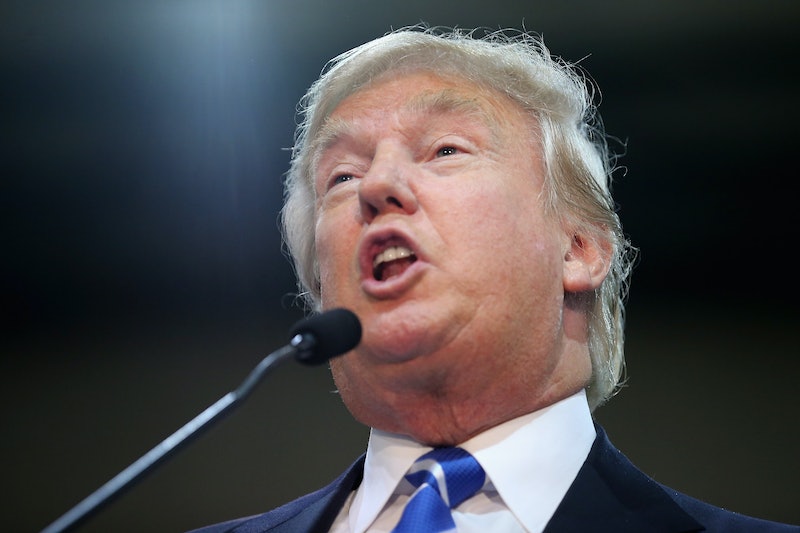 The first Democratic primary debate of 2016 is over, but if you’re the type who enjoys these sort of things, then don’t worry. The Republican candidates will have another debate, their third of the campaign, in just under a week and a half. But some last-minute drama surrounding the format of the debate has thrown a wrench into the process, and several candidates are threatening to boycott it as a result. And naturally, the most pressing question to arise from this is: Will Donald Trump be at the next debate?

There’s a chance he won’t. Trump and several of his opponents are furious at CNBC’s proposed rules for the Oct. 28 debate, and might skip the entire event in protest. According to reports in Politico and elsewhere, CNBC informed the candidates’ campaigns Wednesday that the next debate won’t feature opening or closing statements and will be two hours long. That runtime doesn’t include commercials, which will add an additional eight to 16 minutes.

Several of the candidates, including Trump, found this completely unacceptable. They're demanding that the runtime include commercial breaks, and that all of the candidates be given the opportunity to deliver opening statements.

On Thursday, Trump and Ben Carson co-authored a letter to CNBC stating that they won’t attend the forum if the network adopts these rules. “Neither of those conditions are acceptable,” the two candidates wrote in the letter, which was obtained by NBC News. “Neither Mr. Trump or Dr. Carson will participate in your debate if it is longer than 120 minutes including commercials and does not include opening and closing statements.” Trump and Carson aren’t the only ones directing their ire at the network. An aide to Rand Paul fumed that “if we don’t have opening and closing statements, CNBC can go fuck themselves.”

The last Republican debate was criticized for many reasons, one of which being that it ran for three hours including commercials. A forum of that length doesn’t just test the audience’s patience; it tests the physical stamina of the candidates themselves. Asking that the debate be kept to two hours is eminently reasonable.

The demand for opening and closing statements is a bit less defensible. After all, those are the least debate-y part of any debate, since they’re pre-written and generally don’t serve much of a function that the candidates’ “About Me” pages don't already perform.

Not every candidate is irritated at CNBC. Marco Rubio and Jeb Bush will both participate regardless of the rules, according to their campaigns. Meanwhile, a representative for Lindsey Graham said that the South Carolina senator will “gladly take [the] place” of any candidate who boycotts the next GOP debate. But Graham is currently polling at 0.4 percent, and has been relegated to the “kid’s table” debate at the last two forums, so his eagerness to get in on the main event is somewhat predictable.

It’s unclear how CNBC will respond, but a spokesman said in a statement that it will “certainly take the candidates’ views on the format into consideration as we finalize the debate structure.” Which, let’s face it, is probably code for “we’ll bend on this, because Donald Trump attracts an ungodly amount of viewers to these things.”