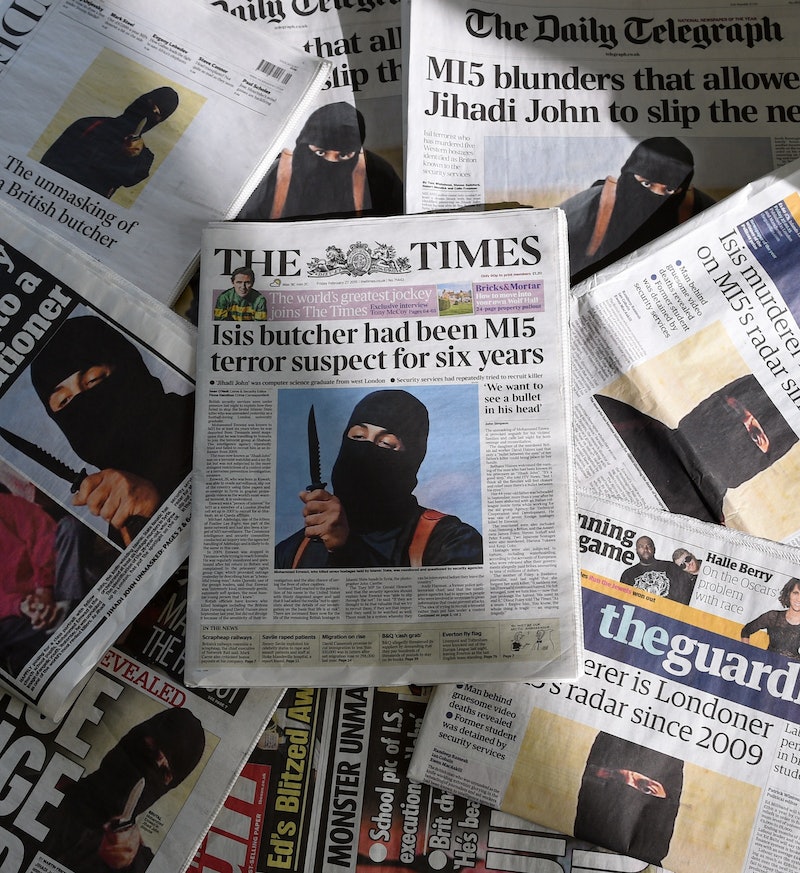 You could say throwing together a DIY Jihadi John Halloween costume isn't even a fresh idea anymore, since last year there were Instagrams on Instagrams of bandana face masks and fake machine guns. Don't you remember? Groups of men and women pretending to be members of ISIS showed up to your costume party, and they showed up in packs. Actually, I hope you say the idea is stale. So stale an idea that you come up with a new one, because dressing up as someone who is primarily known for beheading others for the sake of demonstrating power isn't the creative, funny costume — that doubles as a means for subtly letting your crush know you're an intellectual who is up on current events — you thought it might be.

I might be able to give last year's "Jihadi John" Halloween-goers a pass if they're willing to plead super naive. ISIS only gained global prominence as an organized militant group in early 2014, after the capturing of various cities in Iraq and heavy recruiting. And it has taken us some time to fully grasp the gross level of war crimes and human rights abuses carried out by the group over the years.

At this point, though, we know the facts and we know them well. ISIS as a group is responsible for the deaths of hundreds (probably thousands) of prisoners of war and civilians; they recruit child soldiers and regularly carry out beheadings and mass executions. And Jihadi John, whose legal name is Mohammed Emwazi, is a member of the extremist group who has appeared in a number of ISIS's execution videos.

That’s the power of Halloween: It can defang even Death itself by putting it on the same level as, say, a sexy nurse. And that’s why we need droves of American boys and girls to don Islamic State Halloween costumes on Oct. 31. Let goofy photos of them fill the Internet.

It's a well-made point. But the American boys and girls purchasing the plastic assault rifles are likely not putting the same kind of thought into their decision to dress up as jihadists as Charlie Chaplin put into imitating Hitler in "The Great Dictator." If everyone donning a black gown and face mask did it with the intention of making "angry radicalized adolescents" look uncool or infantile, as Moyer wants, then that might be a choice worthy of real discussion. By the looks of last year's Instagram photos, though, that wasn't the case.

While it may be too late to prevent the deed from ever being done, every October is a chance to brainstorm new costume ideas and trash the really, really bad ones. This idea happened to be a terrible one, both for the blatant insensitivity toward those facing the dread of ISIS actions every day and the obvious non-attempt at making any thoughtful political statement in the process.

So let's just not this year — to ISIS-themed costumes and, yes, even yard displays.

In case you weren't sure, those are stale too.