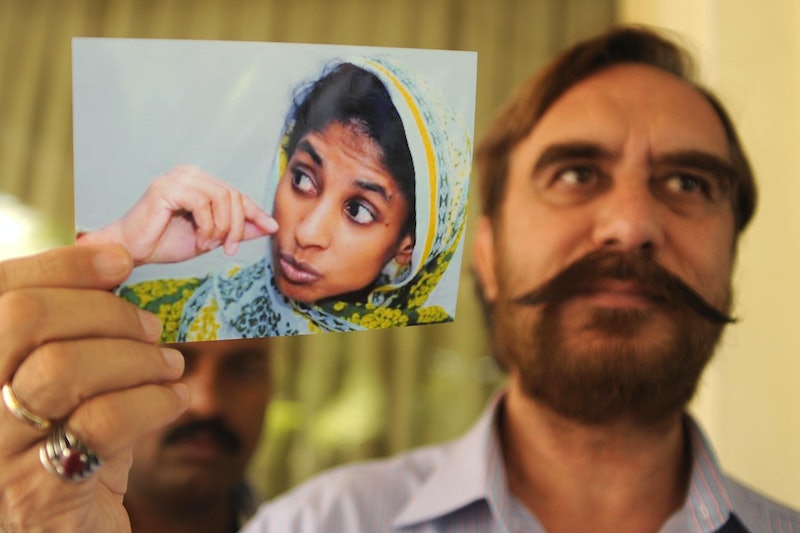 An Indian woman who goes by the name Geeta was roughly 11 years old when she accidentally made her way from her home country into Pakistan, where rangers found her alone in Lahore riding a cross-border train. Deaf and mute, Geeta was ultimately put under the care of charity, the Edhi Foundation. That was 12 years ago. Today, Geeta is finally returning to her family in India, thanks to a Bollywood movie script that pretty much mirrors her life story.

While living in Pakistan, workers from the charitable foundation attempted to trace her family but couldn't determine much more other than that her home country is India. Those at the charity and the orphanage where Geeta lived didn't even have a name for the girl, deciding to call her the Muslim name Fatima, then changing it to Geeta upon learning that she was likely a Hindu, according to Business Insider.

Situations like Geeta's can become pretty complicated when you're dealing with international borders, and super complicated when it's the border between India and Pakistan, one of the most militarized boundaries in the world. It wasn't until a particular Bollywood blockbuster movie produced by and starring Salman Khan, Bajrangi Bhaijaan, hit theaters this past summer that her story gained renewed attention — enough attention for the Indian government to promise to get her back home.

How did the movie help get Geeta's story out, you ask? Here's the plot of Bajrangi Bhaijaan: a young mute girl gets separated from her mother after hopping off a train in Pakistan and inadvertently ends up on a train to India. She then meets a man with a ridiculously kind-hearted spirit — he's also a little bit of a dope — who takes on the feat of getting her back home.

Sounds (almost) unbelievably similar to Geeta's own life. One difference: *MOVIE SPOILER ALERT* the girl in Bajrangi Bhaijaan makes it home in a glorious moment as thousands of citizens from both countries watch her make the short walk across the border. For Geeta, that ridiculously fantastic fairy-tale ending hadn't happened yet.

So you can imagine how Indian and Pakistani citizens went crazy over Geeta's story:

Geeta soon found herself doing interviews on India's leading television network, NDTV, and speaking with Salman Khan himself via a sign language interpreter. And now she is to be flown to Delhi and reunited with her family conditional upon DNA testing, according to a statement made by India's external affairs minister on Thursday.

"Finally we have succeeded and Geeta is very happy. We have told her that her travel documents are being prepared," Anwar Kazmi, a spokesperson for Edhi Foundation, said in Karachi, The Washington Post reported.