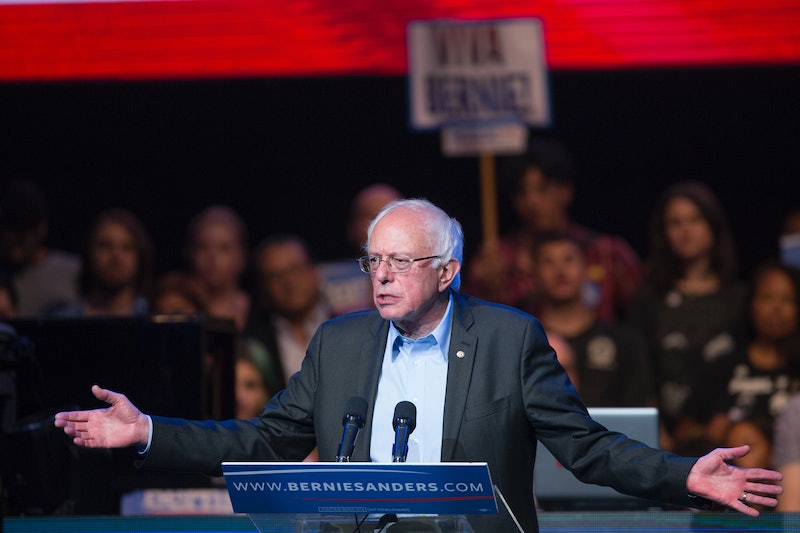 Although he may stand out for his progressive approach to many issues, Bernie Sander's stance on abortion is pretty in line with the rest of the other Democratic presidential candidates. It's not surprising, considering that being pro-choice has become a staple of the Democratic Party. And as the debate surrounding Planned Parenthood and abortion grows increasingly more divisive, being pro-choice is very much a political issue now.

But long before Planned Parenthood was fending off edited videos and fighting to keep their funding, Sanders was a champion for reproductive rights. In 1993, he sponsored the Freedom of Choice Act, which sought to keep states from being able to restrict a woman's access to abortions at certain stages of her pregnancy. He's a supporter of Planned Parenthood and vowed to fight for the organization amid efforts this summer to defund it. And he has a 100 percent rating from both Planned Parenthood and NARAL Pro-Choice America.

He's outspoken and proud of his record, too. This summer while speaking at Liberty University, a Christian college in Virginia, Sanders wasn't shy about voicing his opinion. "I believe in women's rights, and the right of a woman to control her own body," he told the largely pro-life audience.

But, although Sanders has a history of fighting for reproductive rights, you wouldn't know it if you watched the first Democratic primary debate. In fact, you wouldn't know that anyone — save Hillary Clinton — was in favor of protecting a woman's right to choose, despite the fact that everyone on stage supported women's rights.

Both Martin O'Malley and Jim Webb — who were polling at less than 1 percent — have histories of supporting abortion. Like Sanders, they both have perfect scores from Planned Parenthood and NARAL. In 1992, O'Malley supported a Maryland referendum that protected abortions from government interference until a fetus could live outside of the womb. And Webb has an even longer history of supporting women's access to safe and legal abortions. During his time in the Senate, he has repeatedly voted in favor of protecting abortion access.

But, like Sanders, neither of them mentioned their records during the debate. Lincoln Chafee — who arguably had the worst debate performance — briefly mentioned his pro-choice record. Even while serving as a Republican, Chafee voted and acted to support abortion access, citing his history of being pro-choice during the debate as proof that he doesn't flip-flop on issues. And judging by his voting history, Chafee truly understands and supports the issue.

It's probably not surprising, however, that the only candidate who worked to include reproductive rights into the debate was Clinton. Even though there were no questions asked about Planned Parenthood, Clinton managed to reference the organization while talking about Republican's views on the role of large government. "They don't mind having big government to interfere with a woman's right to choose and to try to take down Planned Parenthood," Clinton said in what of her most memorable quotes. "They're fine with big government when it comes to that."

Aside from Chafee's line, it was the only time that reproductive health was brought up at all in the debate. As the only female Democratic candidate, it makes sense that she is the most outspoken and supportive of reproductive health. Not only has Clinton supported Planned Parenthood, but she has repeatedly vowed to continue to fight for abortion access as president.

Although voters know that Sanders — and the other candidates — supports reproductive rights, it might do him some good to discuss it more vigorously on the campaign trail. For Sanders, protecting reproductive health is part of a larger discussion involving poverty. According to Sanders, combatting poverty reduces the risk and need for abortions by providing women with sexual education and affordable contraception. But following the total silence on the stage on Tuesday, talking more about the correlation between the two issues could do him some good. And might help him separate himself further from the pack.