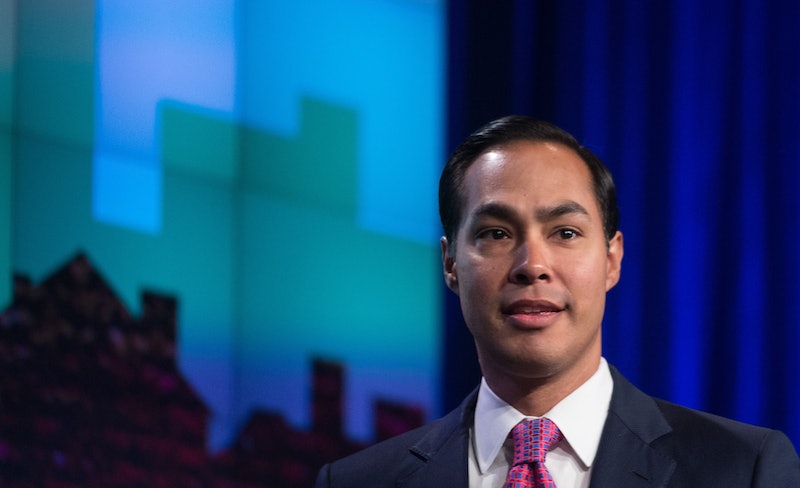 On Thursday, Democratic presidential candidate Hillary Clinton gave quite the shout-out to Julian Castro, inciting speculation that Castro could be Clinton's favored choice as a vice presidential running mate. Reuters reports that, while in San Antonio, Texas, speaking at a U.S. Hispanic Chamber of Commerce meeting, Clinton was asked if she was considering Castro for her vice president. Clinton responded that she was "going to look really hard at [Castro] for anything, because that's how good he is." A ringing endorsement if not a direct answer to the question, Castro is still on Clinton's radar in a major way. So who is Julian Castro? He hasn't been in Washington long, but he's had a successful political career so far.

Castro has also given his endorsement to the Clinton campaign, stating at a Latinos For Hillary rally on Thursday, "Through the years she has always, always been there for us, and today we're here for her," according to Reuters. Clinton said that she was "thrilled" to have Castro's support.

Currently serving in President Obama's cabinet as the Secretary of Housing and Urban Development (HUD), 41 year old Castro is the second member of the president's cabinet to endorse Clinton. Castro's career in Washington D.C. in July of 2014 when he was sworn in as the 16th U.S. Secretary of HUD. Castro's official HUD biography page lists his goal for the department to be "giving every person, regardless of their station in life, new opportunities to thrive."

Having spent just over a year in national politics, the bulk of Castro's political resume comes from his three terms as mayor of San Antonio. Castro's first term as mayor began in 2009, where he remained until leaving for Washington in 2014. The then-mayor's websites lists a focus on improvements in education and San Antonio's "urban core." Castro lists accomplishments such as San Antonio's 2011 ranking as the best performing local economy in the U.S. by the Milken Institute, and an 11.6% increase in college enrollment among high school seniors.

Castro has a twin brother, Joaquin, who is also a political powerhouse. Joaquin Castro began his first term in the House of Representatives in 2013, representing San Antonio's 20th congressional district. After Julian gave a very popular keynote speech at the 2013 Democratic National Convention, Jon Steward joked on The Daily Show that "Democrats have not only a rising Latino star in San Antonio mayor Julián Castro, they have an extra one of him in case he breaks. The Castro twins are considered a political force to be reckoned with.

The Clinton camp has not solidly confirmed that Castro would be Clinton's V.P. if she receives the nomination, but her enthusiasm about the quality of his work speaks to the very real possibility that we could see a Clinton-Castro ticket for 2016. V.P. candidates are usually not announced until the time of a party's national convention, which tend to take place in July or August, so it could be another year before we learn if Castro will be at Clinton's side if she secures the nomination.