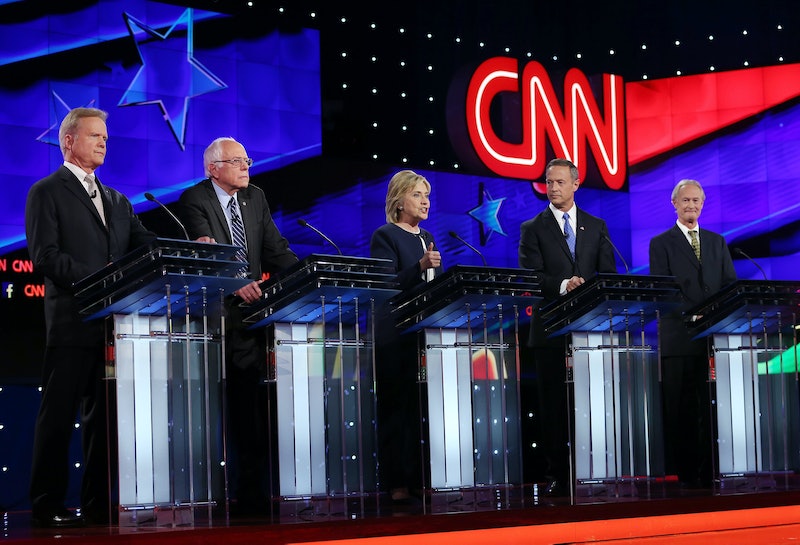 The 2016 primary campaign season is in full swing, and we've already gotten to hear a little something from both sides of the political spectrum. So far, we've had two Republican debates (four if you count the "kid's table" undercard ones), and the first Democratic face-off went down earlier this week. But sometimes there are issues that you as a viewer and potential voter might be interested in that simply aren't going to get as much play as you'd like in a televised debate. So, without further ado, here are the 4 most vital feminist issues of the 2016 election cycle.

Obviously, there's a feminist angle to the current race that doesn't just come around every four years, with a woman currently leading the Democratic pack, and a credible woman candidate running on the Republican side, too (although her polling numbers have slipped lately). And beyond the simple dynamics of who's running, there are plenty of feminist and women's issues that go along with the whole election experience, too, ones that have big implications for women all throughout the country. Here are four such examples — unless you've got a really good idea where your candidate of choice stands on this kind of stuff, you may want to keep asking more questions.

If you're a progressive this election, as in so many elections, reproductive rights shouldn't be far from your mind. The Republican Party across the board (and the current crop of GOP candidates specifically, with the semi-exception of former New York Governor George Pataki) is very hostile to abortion rights, and states under Republican control in recent years have seen rafts of new restrictions stifling access, for especially for low-income women who face long travel times, waiting periods, and sometimes intimidation by anti-abortion activists.

Of course, by virtue of the Supreme Court's Roe v. Wade ruling back in 1973, abortion is supposed to be a constitutionally protected right. But you wouldn't know it from how things are going in some places — TRAP laws (targeted regulation of abortion providers) have been passed in 25 states around the country, aimed at shutting down clinics through onerous regulatory standards that are often impossible to meet.

This is about as important a feminist issue as it gets, frankly, and it's important that it be a major point of discussion in the 2016 campaign — during the first Democratic debate, abortion access barely came up, even with Hillary Clinton briefly spotlighting it.

It's 2015 right now. The Equal Rights Amendment (ERA) passed both houses of Congress in 1972, and nearly a decade later, in 1982, it failed to be ratified, and was consigned to historical memory. Since then, many feminist organizations, activists, and advocates have continued to vocally support the adoption of the ERA, but it's never gotten another shot as a constitutional amendment. Here's how the ERA would amend the Constitution, in full:

Section 1. Equality of rights under the law shall not be denied or abridged by the United States or by any State on account of sex.

Section 2. The Congress shall have the power to enforce, by appropriate legislation, the provisions of this article.

Section 3. This amendment shall take effect two years after the date of ratification.

There's no point in denying the brutal truth, as the situation stands now — constitutional amendments are a tall order, and even though society has ostensibly progressed a lot since the early 80s, it seems like an even heavier lift now. Back in 1982, 35 states ratified the ERA before a handful dropped out, which was just three states short. Given current levels of polarization, it's hard to imagine even getting that close.

But that doesn't mean the ERA should vanish as an issue — to the contrary, the only way to change the conversation on an issue like this is to never let it go. If every presidential contender in the country had to answer a question on a national debate stage on whether or not they'd support the ERA, and the moral case for its passage was laid bare, it could go a long ways towards building the future we'd like to see.

If you consider yourself a feminist, but the concept of intersectionality is foreign to you, you should do some due diligence and get hip to it. In the simplest terms possible, intersectionality is the acknowledgement that different people within feminism occupy different levels of privilege and oppression, and that feminism should keep the struggles of the least empowered and most vulnerable women front-and-center. For example, while a white, straight upper-middle-class woman and a black lesbian woman both share a lack of male privilege, the latter faces sexism, racism, and anti-gay bigotry at all once, as well as the wage gap for black women being markedly worse than it is for white and Asian women.

Intersectional feminism raises up the idea that those distinctions need to be specifically named, in particular by those within the feminist coalition who're benefitting from more societal privilege — solidarity and self-reflection is a big part of being "on the same team," after all.

At the very least, we know that Clinton had just such an issue put to her during a recent meeting with Black Lives Matter leaders — in a Medium post published Thursday, leading activist DeRay McKesson described a meeting with Clinton and some of her staff, in which she was urged to address violence against the black trans community.

We discussed the epidemic of violence against black trans individuals, offered solutions such as the decriminalization of marijuana and sex work, and pushed HRC to adopt specific solutions to this issue. HRC proposed to take action to ensure those responsible are brought to justice and indicated she was exploring the various considerations for decriminalization (i.e. for youth or adults as well, etc.).

There are a lot of people out there who'll try to make you feel bad if you're primarily excited that a woman might win the presidency. They'll try to argue that gender shouldn't be a consideration, that it should be strictly about the issues, and that really, to even consider that makes you the real sexist.

If this happens to you at any point, do yourself a favor and tell them to back the hell up. When you've got a country that's the world's foremost global superpower, and fancies itself an exemplar of moral, freedoms, and human rights, and it still can't manage to elect a single woman in more than 300 years, that's not some sort of accident. It's precisely the effect of prioritizing male intellect, authority and leadership for centuries, stifling the advancement of women into politics across the board, and making those that succeed an exception to the rule.

Basically, some people will tell you that breaking down the walls of the presidential patriarchy is not, in itself, sufficient cause to sway your vote. They are wrong — it's long past due, and it's an entirely worthy single-issue to prioritize. And that's true whether you're voting for a Democrat or for a Republican.