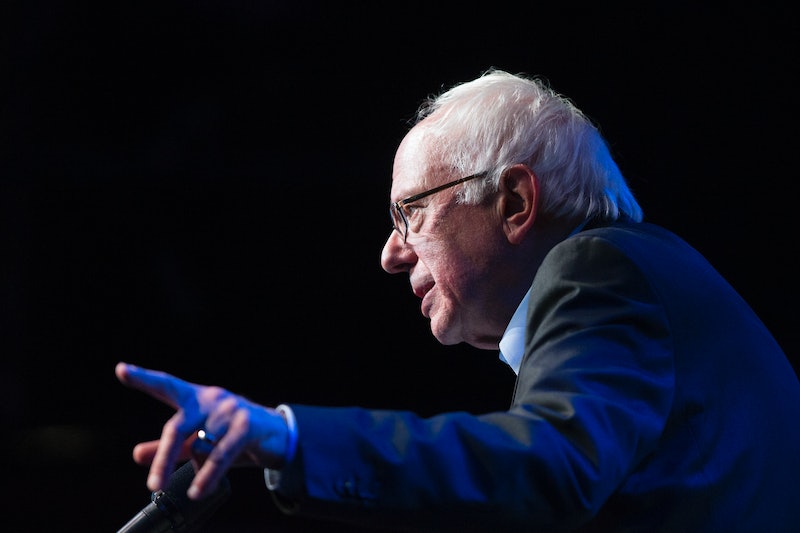 During the first Democratic debate earlier this week, the candidates received an important question: "Do black lives matter, or do all lives matter?" Sanders made it explicitly clear that he is on board with #BlackLivesMatter, but he went one step further — he said Sandra Bland's name, and slammed the broken justice system that resulted in her being found dead in a jail cell. This would not have been possible without the work of activists across the country shutting down his rallies, protesting, marching, proposing policy changes, and ultimately pressuring him and the other candidates to recognize the disproportionate ways in which black people are affected by police brutality. But something else happened, just five days before the debate, that might have pushed Sanders to say Bland's name: He met her mother.

Last week, the Rev. Hannah Adair Bonner — curator of The Shout, a spoken-word activism movement — wrote a post for Soul Unbound about how she and her sister were having lunch with Shante Needham and Geneva Reed-Veal, Bland's sister and mother, when they noticed Sanders eating at the same restaurant. Bonner then approached Sanders to tell him that she was with Bland's mother, and thought that perhaps he would like to meet her. He did, and he and Bland's mother began to converse.

“What happened to your daughter is inexcusable,” Sanders told Reed-Veal. “We are broken, and this has exposed us.” According to Bonner, Sanders promised that he would "continue to #SayHerName #SandraBland" and persist in the pursuit of justice. The women then asked Sanders for a photo, and he agreed.

But it was what Sanders didn't do that earned him Bonner's gratitude.

He did not impose upon Ms. Geneva to ask for a picture of his own. He did not use the moment as an opportunity to promote his campaign. He took no record, he made no statement. He did not try to turn it into a publicity stunt. He simply made space for a sacred moment, and then let it pass without trying to gain anything from it. For that, I respect him. For that, I am grateful. That choice may not have made him a very good politician, but it made him a better man.

Not only did Sanders make no mention of this meeting in the public sphere, but he also used one of the biggest national platforms to finally answer the demand he and Martin O'Malley received months ago at Netroots Nation: He said Bland's name, and in doing so humanized a movement in which he is still working to find his footing. As DeRay Mckesson wrote following his meetings with Sanders and fellow Democratic candidate Hillary Clinton, Sanders certainly does have a lot of work ahead of him, but he has a "strong initial platform" that reflects his genuine anger about the broken criminal justice system. And, as Colin McEnroe wrote for Salon following the debate, it is perhaps this anger that reflects Sanders' authenticity and makes him appeal to voters.

Sanders wants a revolution, and that is a revolution that needs to happen whether or not he is elected. This movement has never been about just him. It is about the millions of people who struggle to access critical resources, to fight for justice, and to fight for their lives. It is about people like Bland, who will travel across the country to fight injustice, only to come face to face with a system that does not serve them. As Bonner wrote, "Senator Sanders was right. Her death was inexcusable; yet her legacy moves forward without yielding."