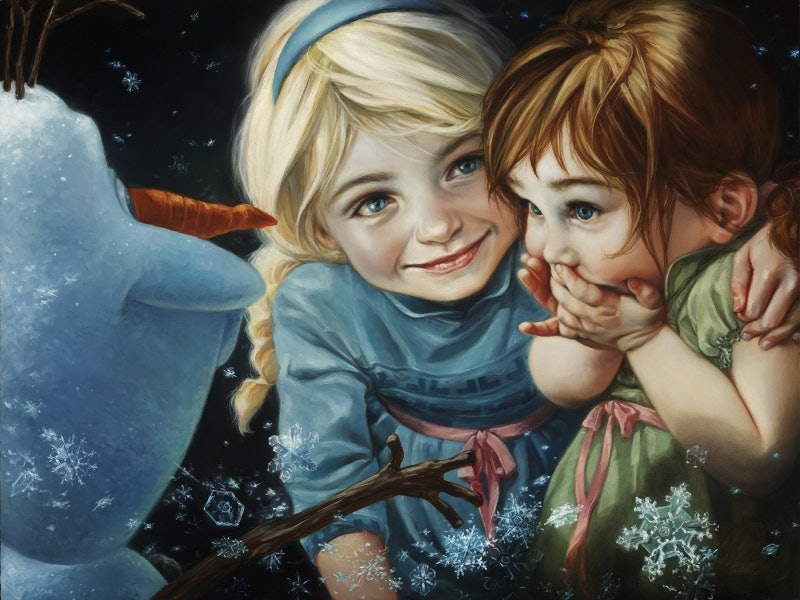 Disney Princesses have been turned into everything from pin-up girls to hot dogs (and I don't know about you, but I'd personally like to see a combination of the two). It seems like you can't log on to the Internet without coming across a new reimagining of Jasmine, Ariel, Belle, and the rest — and recently, I stumbled upon one rendition more beautiful and interesting than any I had seen before: Animated characters and Disney Princesses painted in the style of fine art. Created by artist Heather Theurer, the portraits feature everyone Merida to Mr. Toad, and they're definitely the kind of thing you'd want to hang on your wall.

Theurer tells Bustle via email that the seeds of series were planted about five years ago. She was showcasing her work at San Diego Comic-Con and a Disney marketing representative approached her about creating Disney-inspired work in her highly unique, fantastical style. Despite having loved the films since childhood, Theurer had never previously done any Disney-inspired work; but she t "What the heck, why not?" and dove into the project, creating the stunning pieces that have become so popular in the years since.

"The biggest thing about my Disney pieces is that I didn't want them just to be a re-creation of what Disney had already done," Theurer tells Bustle. "I love the story-telling part of creating art, and I've tried to imbue more than only a likeness of the characters in my paintings, but a life. I wanted to capture their struggles, their pride, their peace. And when the audience gets that — sometimes even drawing them to tears — it's the best feeling in the world."

Though Theurer's work is frequently referred to as being done in a "Renaissance" style, she likens her style more to the Pre-Raphaelites of the late 19th century. But surprsingly, she doesn't have a formal education in the fine arts. She mentions attending one year of a two-year college program, noting that the basic courses she took during this time pushed her to be a better artist. Otherwise, she considers herself an "eternal student."

"I think being keenly observational is probably the defining attribute needed to acquire skill as an artist," says Theurer. "But my learning doesn't happen in a classroom. I thrive on looking closely at everything — not just the pretty stuff, mind you, but everything. I love to study textures, light, form and color."

Outside her Disney series, Theurer is a skilled artist whose work encapsulates the beauty and wonder of the natural world, and the possibilities of imagination. She draws on inspiration from everyday life, turning the mundane into the fantastical. "Everything I see is a influence of some kind or another, no joke. I wake up from dreams that I have to write down or make sketches of because they're so amazing. During the day, I'm bombarded by life in all it's forms and I find it fascinating."

Theurer's family and children are also a big part of her inspiration. She describes going to bed with a feeling of "sensory overload" and starting it all over again the next day.

Coming up, Theurer has "loads" of projects on the way. Disney fans will be thrilled to learn she has a few more pieces in the works, including an Alice in Wonderland-themed one. She is also working on a "contemporary fantasy" novel which she is both writing and illustrating. Whatever she does next, I am certain it will be incredible.

To see more of Theurer's work, both Disney and non-, visit HeatherTheurer.com.