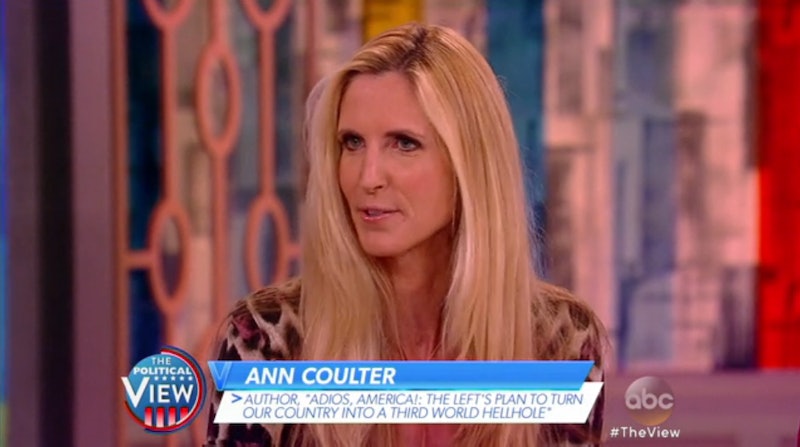 Tactless right-wing commentator and author Ann Coulter stirred up controversy again on Friday during a sit-down with the hosts of ABC’s The View to promote her new book, Adios, America. Throughout the segment, Coulter managed to make anti-immigration comments so bad that they almost made Donald Trump’s anti-Mexican diatribes look tame. For much of the GOP’s right wing (which has largely made it its business to offend every group possible), Coulter's statements were lauded as tough talk, and revolutionary. But despite what soaring poll numbers and hordes of overexcited rally attendees might suggest, that sort of rhetoric may very well lead to the Party’s downfall.

During Friday’s tumultuous visit, Coulter made it her mission to smugly defy all rational logic and stump for Trump’s campaign while simultaneously taking time out of shilling her new book to correct native spanish speakers on how to pronounce spanish words.

“Enough about Trump, let’s talk about you,” said host Ana Navarro, who is Nicaraguan, changing gears early in the visit. “Tell us: what does this provocative title, [Adios, America], mean?”

“Well, I say it ‘adios,’” laughed Coulter, shortening the A and causing the word to sound more Americanized. “[And] I say ‘adios,’” Navarro replied stonily, using the correct Spanish pronunciation. The audience remained uncomfortably silent.

The exchange was just one of several awkward moments during Friday’s visit. Speaking out against a wave of immigration over the past few decades, which she claimed benefited the left in terms of votes, and the rich in terms of cheap labor and “cheap maids”, Coulter said that immigrants hurt the American poor the most. After Republican strategist Navarro denounced those statements (“You’re sitting at this table next to two immigrants,” she said, pointing to herself and guest host Padma Lakshmi, “and I don’t think either of us qualifies as poor maids”), Coulter countered by insisting, “But that’s what most [of them] are!”

Coulter followed up those comments by then proceeding to claim that she was Native American because her ancestors had settled in the United States (“I’m a settler, not an immigrant,” said Coulter, “[and] this country was founded by settlers, not immigrants”), and telling host Lakshmi that Lakshmi’s mother had been an “unusual” immigrant because she had come to the United States in the 1970s as a medical professional and not an unskilled worker.

Coulter’s brand of blatantly racist postulation, which has previously been espoused by those on the fringes of the Republican Party, has, much to the chagrin of a wider portion of the American public, taken a seat at the wheel of the GOP in recent days, with candidates like Ben Carson, Rick Santorum, and Mike Huckabee openly questioning policies such as birthright citizenship and putting forth serious suggestions about a nearly 2,000 mile-long wall at the U.S. southern border, without much challenge within the Party itself.

“I know the 14th Amendment has been brought up recently, about anchor babies—and it doesn’t make any sense to me that people could come in here, have a baby and that baby becomes an American citizen,” said Carson, who is currently in second place in many 2016 polls, at a rally in Phoenix this past August. In an interview with CNN’s Wolf Blitzer that same month, South Carolina Sen. Lindsey Graham remarked, “I think it's a bad practice to give citizenship based on birth — we have evidence of people buying tourist visas for the express purpose of coming over here and having a child as birth tourism.”

Rather than asking themselves critical questions regarding the actual numbers behind the immigration “facts” trotted out at campaign stops and in aggressive stump speeches, the GOP candidates in the 2016 cycle have largely made themselves a comfortable nest of angry rhetoric and supremacist values. Unfortunately for their future counterparts the tide of American sentiment is changing without them.

With a recent Pew Poll study suggesting that the majority of Democrats and Independents believe immigrants make the country a “better” place in the long run (with at least 31 percent of Republicans in agreement), and another August 2015 survey showing that 72 percent of Americans support a way for illegal immigrants to remain in the United States legally, it might serve the GOP well to reconsider its own stances and adjust for public perception.

Speaking out in discriminatory and impertinent tones on the sensitive subject of immigration might win over right wing voters for the moment, but as the demographics shift and newer generations taking a more humanitarian look at the sociopolitical docket, the GOP’s current chorus of anti-outsider sentiment might eventually be its own undoing.