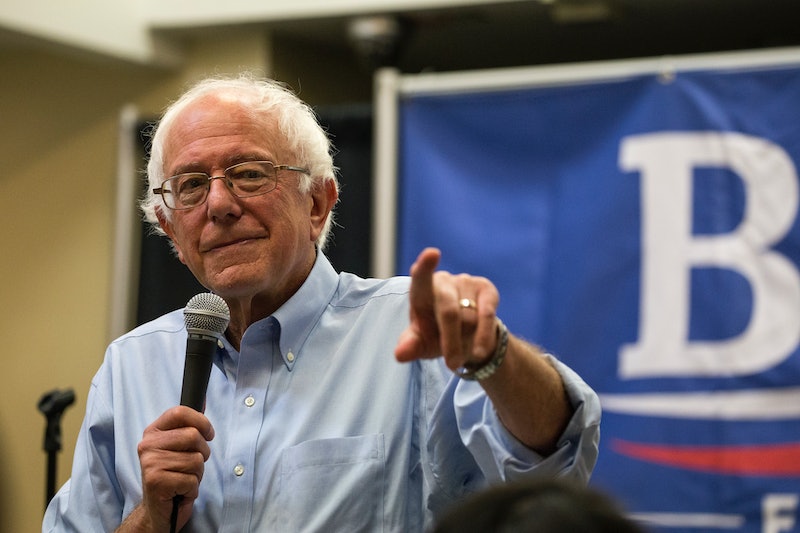 Democratic candidate and perpetual underdog Bernie Sanders just earned a huge win, and it couldn't have come at a better time. On Friday night, Real Time host Bill Maher unofficially endorsed Sanders for president during Sanders' visit to the HBO set, prompting the audience and a good portion of the social media sphere to chime in enthusiastically. After a successful showing at Tuesday's first Democratic primary debate, Maher's endorsement was the perfect way to cap off a big week — and for a self-proclaimed democratic socialist like Sanders, who often struggles to convey his message without scaring off more mainstream voters, support from big names like Maher are vital.

Within minutes of sitting down with Sanders, Maher had already begun digging for serious answers. "My question for you is the word 'socialist' — I want to get right to this," said Maher. "Because I want to help your campaign, I want to see you get the nomination, [so] we have to teach Americans what this is ... I don't think most Americans realize that they're already socialists."

Sanders then replied that Americans needed to fundamentally understand the things that democratic socialists like himself hoped to achieve. "We want to deal with grotesque level of income inequality in America," Sanders said, citing one example. "Very few people think that [this] is acceptable [...]."

In a surprising move, Maher then challenged Sanders' assertions. "I think [Republicans] hear [what you're saying], but it doesn't compute that that's going to be solved by socialism," said Maher, adding that the way to win over voters wary of the term "socialist" was to show them that the majority of government funded programs they supported were, in fact, socialist. Maher continued,

Socialism is the programs they already like. They like Social Security. That's socialism. They like Medicare. They like the VA. They like the military. It's already a socialist country. ... We have to un-demonize that word. ... [The number of people who say they'd vote for a socialist] is at the bottom [of the list] — they hear "socialist", they hear "herpes", Bernie!

For the greater part, viewers and Twitter users seemed to agree, with many tweeting instances of everyday socialism. "If you took your children to public school today you participated in socialism," wrote one Twitter user, watching Sanders' interview. Added another, "During the Cold War we did a good job scaring and redefining words like 'communism' and 'socialism'."

Throughout the remainder of the evening, Maher continued to press Sanders on the issue of democratic socialism, inquiring as to how Sanders might suggest funding the majority of his proposed changes, like paid family leave, free public college tuition, and healthcare for all. "You're saying we can pay for all of this without raising taxes on anyone but the 1 percent?" Maher asked.

"We may have to go down a little bit lower than that, but not much lower," Sanders replied.

Despite Maher's aggressive questioning, Sanders' visit to the Real Time set was a productive one, giving the Vermont senator room to explain himself further, outside the confines of a political rally or primary debate. Although Maher stopped just shy of offering Sanders an official presidential endorsement, the progressive talk show host left no doubt on Friday that he would continue to actively support Sanders in the coming months.