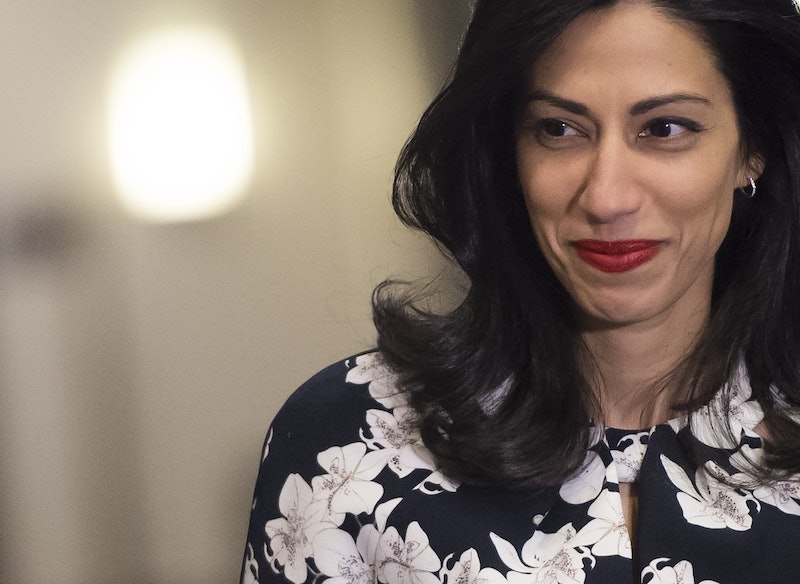 On Friday, Hillary Clinton's longtime friend and aide Huma Abedin (and the vice chairperson of her presidential campaign, to boot) sat before the House Select Benghazi Committee to testify. And let's just say the timing hasn't helped the GOP fend off accusations that this whole thing is a politicized mess — the Benghazi Committee questioned Human Abedin for six hours behind closed doors, according to NBC News, and that's a pretty good indication of just how far they're willing to push to try to dim Clinton's presidential prospects.

Say what you will about Democratic leadership in the House, but it does seem like these sorts of unabashedly political investigations hit a fever pitch whenever the Republicans are in power — the years-long Whitewater investigatory crusade against the Clintons in the 90s, for example. Maybe it's something about the Clintons in particular, or maybe it's just the zeal to regain the presidency, but congressional Republicans are always impressively able to hammer the same issues for years without losing steam, no matter how little it ultimately gets them.

Sadly, we don't know what precisely the committee asked Abedin over the course of her testimony, because it's sealed from the public. But Democratic Maryland representative and committee member Elijah Cummings definitely walked away from the experience with some blunt feelings. Cummings spoke to reporters following Abedin's testimony.

When we look at the actions, calling Ms. Abedin in, letting the press know about the time, the location of her interview, when she, based on other testimony that we've gotten, has no policy responsibilities, no operational responsibilities, was not with Secretary Clinton on the night of this phenomenal tragedy. ... The question also becomes whether this is a taxpayer-funded effort to derail the candidacy of Hillary Clinton.

Cummings also referenced two Republican congresspeople — Majority Leader Kevin McCarthy and Rep. Richard Hanna — who've recently stated that the committee hurting Clinton's candidacy, although McCarthy has since reversed and insisted on its integrity. A third such accusation came from Bradley Podliska, a veteran and ex-staffer for the committee who alleges it turned into an exclusively anti-Clinton pursuit over time.

It'd be fascinating to know what exactly the panel asked Abedin, considering the slew of right-wing conspiracy theories that have been circulated about her since her time with Clinton at the State Department. In particular, there's a lot of aggressive Islamophobia directed her way, often portraying her as a Muslim Brotherhood sympathizer (or outright plant) who's knowingly swaying American policies in the Middle East by catching Clinton's ear.

There's no reason to think those are the sorts of things anybody was lobbing at her on Friday, to be clear. If that were the case, you'd have to bet Cummings would've been even more upset than he was. But even her getting roped into this unending Benghazi farce at all is telling enough — as Cummings said, there's no credible allegation that she bears any responsibility for anything relating to the Benghazi attack, and she wasn't with Clinton at the time that it happened. In short, you're forgiven if this all sounds a little less investigatory, and a little more nakedly political.