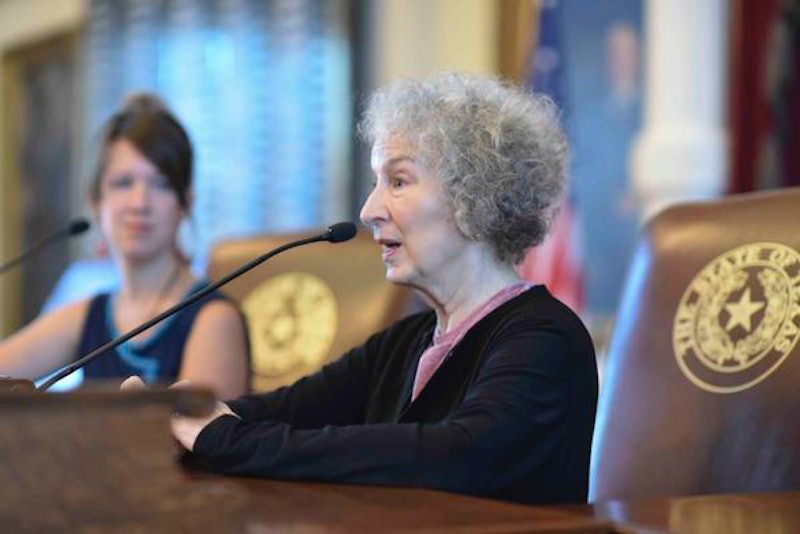 The 20th Texas Book Festival has taken over Austin this weekend, making the Lone Star State's Capitol a book-lover's dream. Entire blocks have been closed off to make room for tents brimming with books, talks featuring literary heroes, live music, and food trucks of every variety. Visitors have also gotten the chance to enjoy impressive indoor venues like the Capitol building itself and the historic Paramount Theatre. One of the most anticipated talks kicked off Saturday when Margaret Atwood spoke in the House Chamber.

The session was entitled "Margaret Atwood Goes First on The Heart Goes Last," referencing the title of her most recent novel, but the celebrated Canadian author discussed much more than just her latest book. Atwood covered topics from the book she penned for the Future Library Project, which won't be read until 2114, to writing for Playboy before it went "pictorial." (She even briefly touched on the magazine's recent decision to reinvent itself without nudity.) She was as wise, fascinating, and funny as you'd expect based on her thought-provoking work, and she even tolerated a few fan selfies (including mine!) once it was over.

For those who weren't able to attend in person, here are 10 amazing quotes from Margaret Atwood's talk at the 2015 Texas Book Festival:

On Writing The Heart Goes Last

I had possibly a little bit too much fun because I know that you're supposed to suffer. ... I do suffer, just not too much. ... You don't want to suffer too much at my age.

On The Development Of Real-Life Elvis Sex Robots

People ... are making such advances in the field of personal robotics. ... You would be amazed. But I hope you will never have the opportunity to be quite that amazed.

On Writing For Playboy

You may recall that Playboy was once a very good fiction site, but it only published guy fiction writers ... so when Playboy said that it would now publish women, you kind of had to, didn't you?

I'm much less thoughtful than you might think. ... [Teachers], of course, see this grand structure and they think you planned it that way, whereas it is the other way around. I think books grow up rather than get imposed down.

On Being Honored By The Royal Society of Literature

Charles Dickens' quill pen has been written with by me because the Royal Society of Literature in London has it, and when they enroll you as an honorary non-English but acceptable person, they let you sign your name in their great book of acceptable writers.

I think Shakespeare wrote [The Tempest] because they'd just discovered how to make thunder.

On The Importance Of Reading

I do believe that access to books and reading is one of the cornerstones of a democracy.

I don't think you can really sustain a society if you alienate a lot of young people because they will move somewhere else, and then who's going to pay for your old age support? Think about that.

I thought there might be a moment at the customs and immigration in which they would say, "What is in that box?" and I would say, "I can't tell you."

On Today's Readers Missing Out On Her Future Library Project Contribution

There are a lot of books out there that you will never lay hands or eyes on because you haven't heard of them. ... As a tribute to that idea, find a book that you've never heard of and that you then like and tell other people about it.

And because I still haven't gotten over the fact that Margaret Atwood let me to take a selfie with her, allow me to share my fangirl moment below.