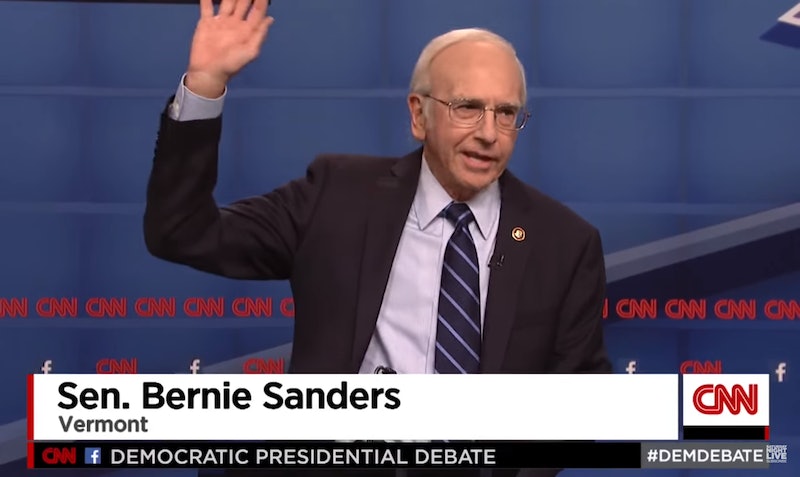 It was bound to happen eventually, but when Larry David finally appeared as Bernie Sanders on Saturday Night Live this weekend, it was so much better than we could ever have hoped. Sanders/David comparisons have run rampant since the eccentric Vermont senator first entered the race in April, and on Saturday evening, viewers of the late-night comedy sketch were treated to their first glimpse of David in full Bernie mode. Unsurprisingly, he did not disappoint.

Curb Your Enthusiasm creator and actor David took to SNL's version of the CNN Democratic debate stage during Saturday's skit to raucous applause. "Hello, hello... enough with the 'hellos,' let's do this," said David as Sanders, waving his arms and fully mimicking the senator's fidgety mannerisms. When asked by Jon Rudnitsky's Anderson Cooper how he was doing, David's Sanders quipped, "I'm good — I'm hungry, but I'm good."

After suggesting that he was ready to "dial [things] right up to a 10", the fake Sanders immediately launched into a prophetic rant. "We're doomed!" he yelled in Sanders' thick New York accent. "We need a revolution — millions of people on the streets, and we gotta do something! And we gotta do it now!"

Within minutes, Twitter had exploded. "Larry David as @BernieSanders is just about the best thing ever," tweeted Philadelphia Inquirer cartoonist Rob Tornoe with a Vine of the David skit overlaid with a clip from the original Tuesday night debate, which showcased David's impeccable impersonation of Sanders. Yahoo! Sports blog editor Greg Wyshynski tweeted that David's imitation was the best he'd seen "since Tina [Fey] as [Sarah] Palin."

The hilarious skit also included a few copycat lines of dialogue as well, including one moment when cast member Kate McKinnon, who plays Hillary Clinton, was asked about her notorious email scandal. Before McKinnon's Clinton could respond, David's Sanders stopped her and replied emphatically, drawing straight from the real Sanders' comments at last week's debate, "You know what, can I just jump in here? This may not be great politics, but I think the American people are sick and tired about hearing about your damn emails!"

As Fortune pointed out, unlike earlier famous political impersonations such as Fey's Palin, David largely stuck to painting an overdone caricature of the Vermont senator, using Sanders' quirky one-liners as a jump-off point. "I'm the only candidate up here who's not a billionaire," he said at one point, before adding, "I don't have a super PAC, I don't even have a backpack! ... I own one pair of underwear, that's it. Some of these billionaires, they got three, four pairs!"

The skit was a hit for other players, too: new SNL cast member Rudnitsky knocked it out of the park as a straight-laced Cooper, and actor Alec Baldwin perfectly mimicked former Virginia Sen. Jim Webb's angry tirades over his lack of speaking time.

Of course, no SNL skit is complete without at least a few truthful moments. At the close of the mock debate, David's Sanders quipped knowingly, "I'm Bernie Sanders, and come next November, I will be Hillary Clinton's vice president!"

Who knows? Maybe somewhere down the road, the real Clinton and Sanders will take a hint.