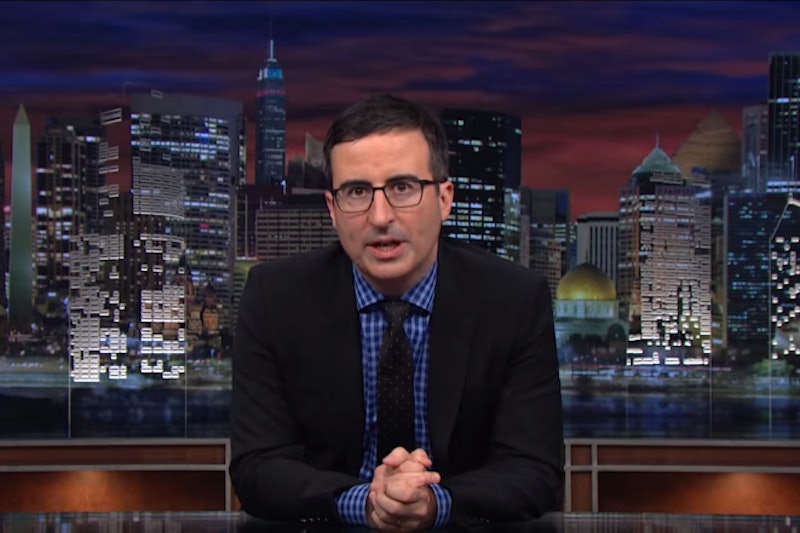 John Oliver, comedian anchor extraordinaire, has a lot to say about a lot of things — except when he doesn't. Sometimes, topics cross the Last Week Tonight host's desk that are so unfathomable, even Oliver and his talented team of producers can't seem to make sense of it, aside from throwing their hands in the air and pulling together some sort of befuddled rant. From shoddy sex-education curriculum to outrageous municipal violations fees, there have been more than a few times that John Oliver himself just couldn't even.

Take Oliver's recent diatribe on North Dakotan oil industry: After learning that an average of one oil worker every six weeks died in the northern state's Bakken region due to on-the-job accidents — or 74 workers total since 2006 — the astonished host replied in the only way he knew appropriate. "A death every six weeks is what you do to keep your soap opera on the air," an appalled Oliver responded. "In real life, that is fucking horrifying."

Oliver didn't stop there. When one oil field worker recounted having worked 69 hours straight (handling explosives, no less), an infuriated Oliver replied, "You shouldn't be allowed to work that long handling frozen yogurt!"

Thankfully, aside from drudging up important, but otherwise largely ignored topics in order to educate the public, Oliver's shocked rants also provide plenty of entertainment from his audience, who is usually as disgusted as the host himself. Here are a few of our favorite "John Oliver Can't Even" moments from the past year and a half:

"Yes, to stop strangers from seeing pictures of their naked body, some women have had to send more strangers more pictures of their naked body," said Oliver, looking as flabbergasted as his audience's shocked silence sounded. "We are one step away from having to protect our children in the future by having the copyright symbol tattooed onto their genitals at birth. ... This situation is insane."

Sex education curriculum across the United States varies wildly — and oftentimes it's just plain inadequate. When Oliver tackled the subject this past August, he tried his very best not to look absolutely flummoxed (but failed terrifically) while watching a clip of activist Elizabeth Smart, who was kidnapped and raped repeatedly for nine months at the age of 14, describe being taught that a woman's virginity was like a piece of gum. "When you engage in sex, that's like getting chewed," Smart recalled a teacher telling her. "And when you do that lots of times, you're gonna become an old piece of gum... and who's going to want you after that?" Smart added that after her kidnapping ordeal, she remembered thinking, "Oh my gosh, I'm that chewed up piece of gum."

In response, following a brief moment of bewildered silence, Oliver bitterly replied, "Learning nothing would have been better than learning that — [and] it's not a great reflection on her teacher that kids who were sick that day got a better education than [Smart] did."

Former NBC Nightly News anchor Brian Williams had been MIA since he was suspended without pay in February for allegations that he had misrepresented several on-air news stories, particularly one instance in which he had claimed to have been traveling in a Chinook helicopter that was subsequently shot down by an RPG during the Iraq War. On Sept. 22, Williams suddenly resurfaced, this time as the newly reassigned breaking news anchor at MSNBC, where he was assigned with covering Pope Francis' visit to the United States.

"Holy shit, [the pope] brought Brian Williams back from the dead!" a shocked Oliver joked on his program the following Sunday, throwing his hands in the air. "It's a miracle!"

John Oliver and FIFA go together about as well as whipped cream and ham (yes, that's a real recipe). For the past few years, the international soccer federation has undergone a litany of scandals, ranging from charges of labor camp housing for stadium workers and allegations of bribery among the higher echelons of the organization's administration — and Oliver has been there to give his own take on the issues each time. After FIFA finally suspended president Sepp Blatter for a total of 90 days this month (much to Oliver's delight), rumors began circulating about who might take up his vacant position — unfortunately, with a laundry list of Blatter's colleagues all unfit to take over, the position has temporarily been filled by acting president Issa Hayatou... who was also recently accused of taking a bribe for the Qatar World Cup bid.

"Of course he's fought allegations of his own, of course he did," Oliver said during a hilariously exasperated rant last Sunday. "At this point, I think it's becoming clear: if FIFA wants to find Blatter's successor within it's own ranks, it'll be like finding a port-o-potty at a music festival — none of them are likely to be clean, so the best you're hoping for is to find the one that's the least covered in shit."

In October last year, while investigating the issue of civil forfeiture, in which law enforcement officers may legally confiscate a person's assets if they're suspected of criminal involvement without actually charging them with a crime, Oliver and his team uncovered video footage of a news reporter questioning a local police officer about $20,000 he had seized from a man during a traffic stop, which the officer claimed was "drug money" — although the man in question told reporters he had withdrawn the funds to purchase a vehicle. The officer failed to include that detail in his report, and when asked why he had failed to do so, the officer stumbled. "If it's not in there, then I didn't put it in there. ... I don't know."

"What do you mean you 'don't know'?" exclaimed Oliver. "I expect a better answer from a police officer than a 4-year-old that just spilled grape juice on the couch!"

In April this year, John Oliver achieved something that most media personalities couldn't possibly dream of when he snagged a coveted interview with former NSA contractor Edward Snowden, who notoriously leaked mountains of classified information in 2013 and has been hiding out in Russia ever since. The interview itself almost didn't happen, as Oliver and his team waited for nearly an hour before Snowden finally showed, but when it did, it was truly something. Over the course of the interview, Oliver hammered the activist and former contractor on whether he had actually read the information he released and listened intently as Snowden explained how the leaked information could most easily be explained to the public.

At the end of the interview, however, Snowden dropped a bomb on the eager host, who had questioned whether it would be easy for him to get home, given his interaction with such a controversial figure. "If you weren't on the [government's watch] list before, you are now," said Snowden. This time, Oliver had no witty remarks or quips. Sitting in shocked silence (whether joking or otherwise), Oliver finally replied, "Is that... is that like a joke, or is that actually possible?"

Don't worry, John, we're sure the NSA has taken you off the list by now. The CIA, the FBI, the State Department, and Homeland Security, however, have probably still got their eye on you.

More like this
Lori Vallow’s Son Was Arrested For Sexual Assault Days Before 'Sins Of Our Mother' Premiered
By Brad Witter
Where Is The Bling Ring’s Rachel Lee Now?
By Arya Roshanian
After The Bling Ring, Nick Prugo Was Embroiled In Another Scandal
By Arya Roshanian
What Is 'Pretty Wild' Star Tess Taylor Up To Now?
By Morgan Leigh Davies
Get Even More From Bustle — Sign Up For The Newsletter