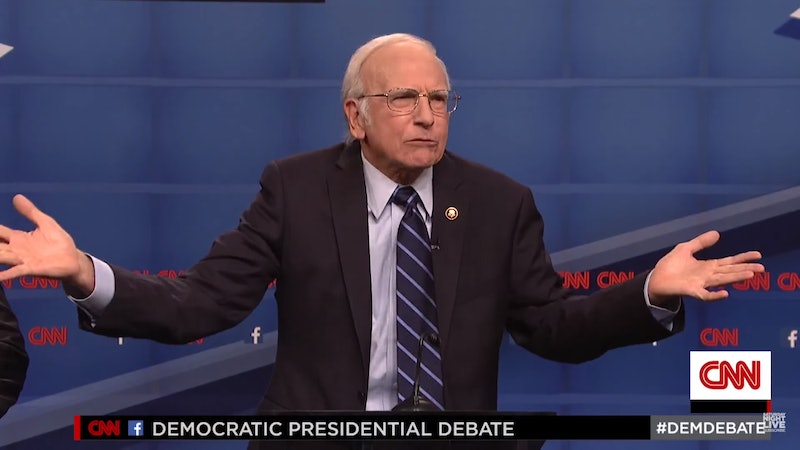 During a Sunday morning appearance on ABC's This Week, Bernie Sanders invited Larry David onto the campaign trail after watching David's awesome Saturday Night Live parody of the Democratic presidential candidate. The comedian, who absolutely nailed Sanders' mannerisms and accent during his surprise appearance in the show's opening sketch, good-naturedly mocked Sanders' debate performance and intense political convictions, and Sanders seemed to love it. "I think we'll use Larry at our next rally. He does better than I do," Sanders said of his fellow Brooklyn native.

Later, speaking to reporters in Iowa City, Sanders said he actually owns two pairs of underwear, unlike David's Sanders character, who said he only owns one:

That’s a joke. Joke, joke, joke. I have an ample supply of underwear. When I was mayor of the city of Burlington I think I did have one suit. But now as a United States senator I have increased my supply of suits as well.

Sanders' response to the parody is indicative of his entire campaign — he doesn't act like a stereotypical politician, and he's eager to connect with people. Story after story keeps breaking about Sanders performing truly honorable actions without milking it for the press. Refusing to publicize his private meeting with Sandra Bland's mother, saving MSNBC's Andrea Mitchell from being trampled after the Democratic debate, and rejecting a donation from big pharma CEO Martin Shkreli show just how well Sanders' actions match up with his good guy political persona. By inviting Larry David to join him on the campaign trail, Sanders increases his likability factor and public profile, and shows he can take a good joke, an important qualification for a U.S. president.

Although David hasn't publicly felt the Bern, he's a well known Democrat who's actually played golf with President Obama. Not that an endorsement from Larry David would be especially necessary anyway — Sanders has had no trouble attracting celebrity advocates, including Mark Ruffalo, Susan Sarandon, and Will Ferrell. Sarah Silverman famously introduced Sanders at a Los Angeles rally that had more than 27,000 people in attendance. While celebrity endorsements may or may not increase Sanders' chances of getting elected next November, the mainstream exposure is certainly helping his grassroots campaign.

Sanders' official Twitter account gained over 30,000 followers during the Democratic presidential debate, and the candidate stated at an event on Wednesday that more than $2.5 million had been donated in less than 24 hours following the debate. After Larry David's SNL performance, tweets poured in praising David's performance and Google searches for Bernie Sanders hit their highest peak since the debate. Sanders' campaign momentum is barreling forward with the power of social media working to his advantage.

As for Larry David, there's already talk about David joining the cast of SNL through the election season to reprise the role that got so much social media buzz. David hasn't given a comment about this performance or his future with the show, but SNL is typically most popular during election season, so it could give David some great exposure. It also remains to be seen if David will accept Sanders' invitation to appear at a rally, but given the outpouring of love for David's SNL performance, it would be a huge missed opportunity on his part.

But one thing is for certain: The resemblance between Sanders and David really is uncanny.