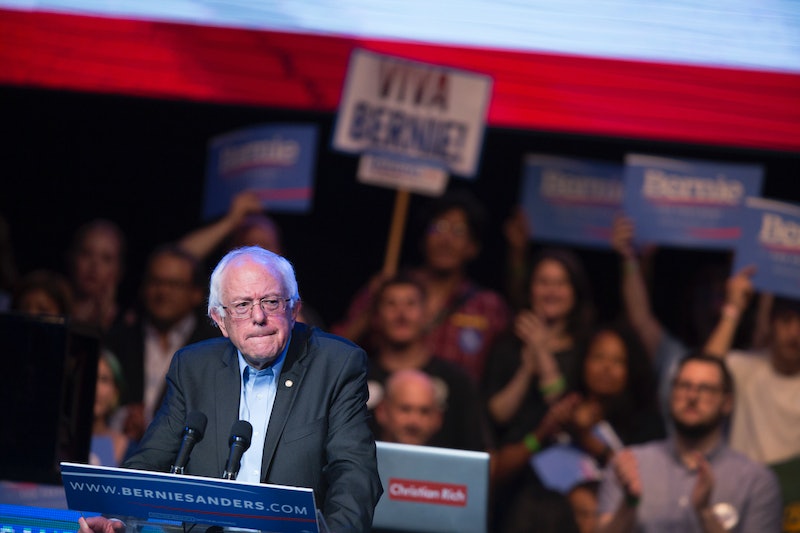 All our dreams came true after the first Democratic presidential debate took place on Tuesday when the debate was parodied during a cold opening of Saturday Night Live. Current SNL cast members represented Hillary Clinton, Lincoln Chafee, and Martin O'Malley. Viewers were treated to Alec Baldwin portraying Jim Webb, playing on his rugged war veteran status as well as his pleas for additional speaking time. But truly the icing on the cake was Larry David's impersonation of Bernie Sanders. The Curb Your Enthusiasm mastermind portrayed Sanders so well that even the presidential candidate himself applauded the actor. Comparisons of the two, especially in their mannerisms and speech, yield some striking similarities. The quotes below prove that. Can you figure out who said it — Bernie Sanders or Larry David?

David rose to prominence for his witticisms as the co-creator of Seinfeld in the 1990s. Sanders similarly hit his stride in the '90s after being elected as House Representative for Vermont's at-large district. Both are known for their passionate orations as much as their witticisms. It was Sanders' quip about Democratic front-runner Hillary Clinton's "damn emails" that elicited the most social media mentions during the second Democratic debate. David's Curb Your Enthusiasm character has inspired an entire bizarre section of crafting and vintage online shop Etsy dedicated to him. Now that you're similarly empowered (and know that Larry David leggings exist), it's time to answer once and for all who said what.

1. While the bankers wear three-piece suits and don't break the knee caps of those who can't pay back, they still are destroying people's lives.

Both Sanders and David frequently rail against the 1 percent.

2. You didn't tell me you were sitting, I wouldn't have given you money in the first place.

Sitting could imply anything. Perhaps big business or frustrating friends?

Who's ranting against the rich this time?

4. People should not underestimate me.

Both have a biting sense of humor but this one should be fairly obvious.

6. Anything that's for free, people will take. They don't discriminate.

Is this the American way or the Curb Your Enthusiasm way?

Who said this call to action?

8. Switzerland is a place where they don't like to fight, so they get people to do their fighting for them while they ski and eat chocolate.

Surely, either David or Sanders is taking a page from Switzerland.

9. You go to Scandinavia, and you will find that people have a much higher standard of living, in terms of education, health care and decent paying jobs.

...Or is it Scandinavia?

10. For many, the American dream has become a nightmare.

This can be both a political and a comedic nightmare.

11. That's a remarkably idiotic thing that you just said, but you know, the fact that you're wearing glasses, I perceive it as a little less idiotic than I normally would.

Both Sanders and David get pretty frustrated from bogus rhetoric.

12. If you can't afford to care for veterans, then don't go to war.

Sound logic, but from whom?

13. Not a fan of the banks. They trample on the middle class, they control Washington, and why do they chain all their pens to the desks?

One of life's great mysteries.

Ready to find out the answers?

There were some trick ones in there — how well did you do?