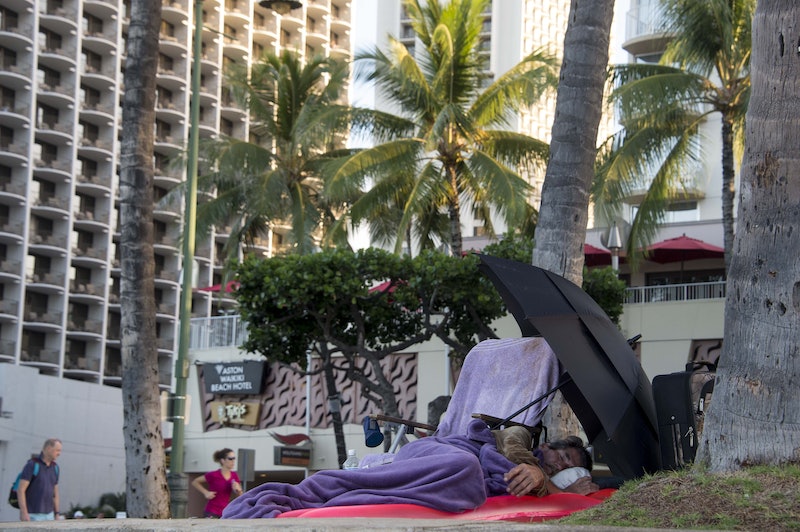 In a press release on Friday, Hawaii Gov. David Ige declared a state of emergency in response to the growing homelessness problem. Ige also requested funding to build a temporary shelter for the scores of displaced families as well as contract extensions for the state's multiple homeless programs in order to combat the rising issue. As one of the nation's top 10 most popular tourist states, it's difficult to understand exactly how things got to this point, although a closer look at the underpinnings of the problem may reveal exactly why Hawaii's homeless population is so high and why nothing the government has done so far has helped.

"Homelessness remains a serious issue in every county throughout the state," Ige said in a statement on Friday; according to a 2014 "State of Homelessness In America" report conducted by the National Alliance to End Homelessness, Hawaii ranked highest on the list of displaced residents per capita — up nearly 10 percent from the year before. That meant that the total homeless population in Hawaii alone topped 7,000.

Scott Morishige, Hawaii's Coordinator on Homelessness, also presented some statistics on homelessness in the governor's statement: "Hawai'i has the highest rate of homelessness per capita among the 50 states, with an estimated 465 homeless individuals per 100,000, [and] the alarming increase in unsheltered individuals and families over the past two years is particularly significant on O'ahu."

The juxtaposition of glimmering beaches and tropical tourist luaus against scenes of tent cities and overcrowded public restrooms is particularly poignant. Despite all the visitor money that flows into Hawaii each year, a good portion of it is ladled into the popular Waikiki neighborhood — making it a "target-rich environment" for much of the homeless population, according to Rick Egged, president of the Waikiki Improvement Association, who spoke with Al Jazeera in October 2014. But thanks to three new measures that were signed into law by Honolulu mayor Kirk Caldwell earlier in the year, the problem is going away — at least for business owners. Less so for the actual homeless population.

"A number of people on Kalakaua Avenue that were staking out and panhandling visitors — they're gone," Egged said, citing the new measures which made it a crime punishable by up to $1,000 to sit or lie on public sidewalks. "We want to make sure that homeless people understand we're not going to let them take over Waikiki's public spaces."

Unfortunately, Caldwell's measures did nothing to improve the lives of the homeless in his community, despite branding the three pieces of legislation as "tough love." Instead, what it did was shift the problem into other, less bustling parts of the Waikiki district. In a tone deaf move, Caldwell insisted in September this year that the measures had worked because there was less "visible presence" — or in more blatant terms, the problem had disappeared because no one could actually see the homeless population anymore.

So what's at the root of the problem? Some believe that low wages and soaring housing prices are to blame. In the town of Waianae alone, which plays host to the country's largest homeless encampment, the majority of tenants are employed native Hawaiians who refuse to take the state's offer of a one-way plane ticket off the island to the continental United States.

In addition to the low wages and high housing costs, legislative measures such as Caldwell's sit-lie law and an increasing number of measures barring citizens from sleeping in their cars, camping, or loitering in public spaces can cause even greater problems for the already troubled homeless of places like Waikiki. According to a report by The Economist from December 2014, the majority of homeless residents who are caught breaking any of those rules are often thrown in a jail cell for the night — leaving them in mountains of debt and unable to afford any sort of temporary housing at all. Rather than helping to solve the homelessness problem, the new legislation often causes a spike instead, leading to a vicious cycle of poverty that's nearly impossible to break.

Luckily, Ige's proclamation this past week might solve at least part of the problem. By funneling money into more homeless shelter programs, rather than banning the homeless altogether (which does nothing, as was evidenced in Waikiki), at least a handful of states have been able to save taxpayers money in the long run as well as provide places for their citizens to go when they stumble on hard times. In Utah, for example, state officials found in 2014 that by simply giving homes to the homeless, the chronically displaced population had dropped by 72 percent in one year — and the state ended up saving $8,000 per homeless person to boot.

"If you want to end homelessness, you put people in housing," Gordon Walker, Utah's director of the state Housing and Community Development Division, told The Washington Post in April. "This is relatively simple."

With Ige's state of emergency declaration, the homeless population of Hawaii has at least won a relatively important battle for the time being. "The lesson learned is that great things can be accomplished when we all work together," Ige added on Friday.