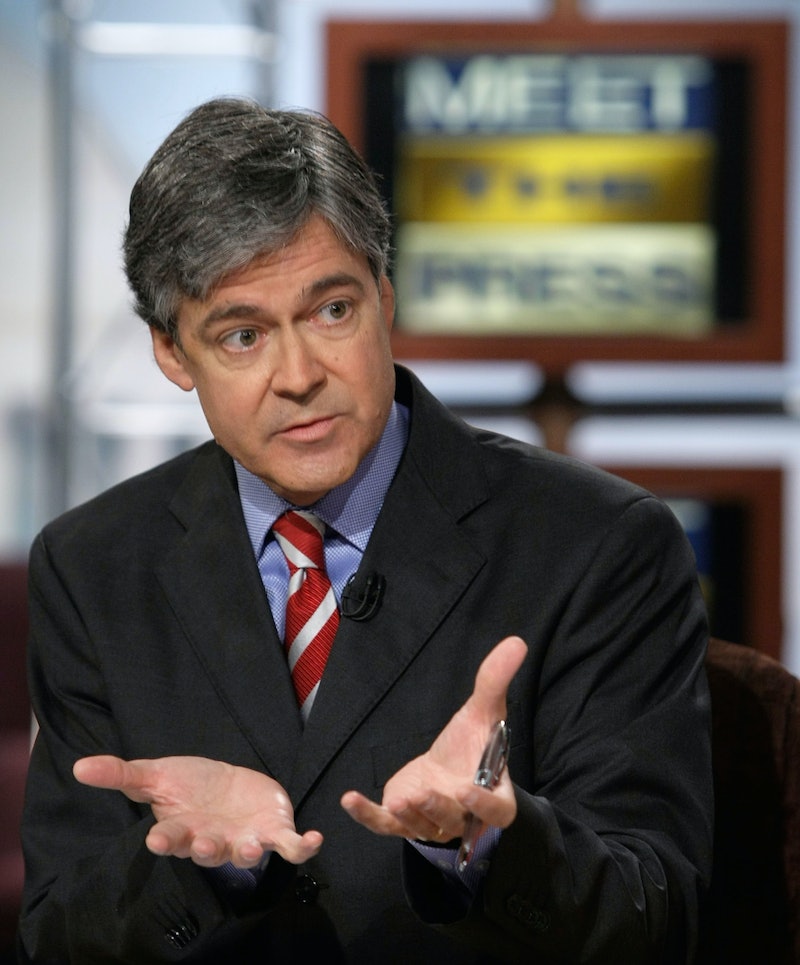 Are you the sort of person who just can't get enough presidential debates? If so, you're in luck, because there's another one right around the corner. On Oct. 28, CNBC will host the third GOP presidential debate. It will have a total of six moderators (!), most of whom host finance-related shows on the network. Only one, John Harwood, is a dedicated political reporter. Who is John Harwood, you ask?

Harwood is CNBC's chief Washington correspondent and a former writer for both The New York Times and The Wall Street Journal. Currently, he hosts Speakeasy With John Harwood, an interview series in which he chats with presidential candidates from both parties. One of the more charming aspects about this show is the setting: Harwood and his subjects converse not in a TV studio, but in a restaurant over lunch.

In terms of coverage, CNBC isn't deeply rooted in politics — its home page doesn't even have a politics section, in fact — but Harwood has politics in his bones. His father, Richard, was a political reporter for The Washington Post, and his mother worked for Robert F. Kennedy's 1968 presidential run. Even John got an early start in the business: As a sixth-grader, he made an appearance in one of Kennedy's campaign ads.

After getting a degree in economics and history at Duke University, Harwood quickly reentered the political fray, covering state politics for The St. Petersburg Times. From there, he went back to his roots: Presidential politics, joining The Wall Street Journal in 1991 to cover the administration of George H.W. Bush. Later, he wrote for The New York Times' now-defunct blog The Caucus, where he wrote about — you guessed it — politics.

Harwood will be joined by several CNBC colleagues: Carl Quintanilla, Becky Quick, Rick Santelli, Jim Cramer, and Sharon Epperson. The first four host Squawk Alley, Squawk Box, Squawk on the Street, and Mad Money, respectively, while Epperson is the network's chief personal finance correspondent. While they're all primarily finance reporters, Santelli inadvertently dipped his toe in politics in 2009 after giving an impassioned speech on CNBC that, in the eyes of some, helped give birth to the Tea Party.

There was a bit of uncertainty surrounding the debate after Donald Trump and Ben Carson threatened to pull out unless CNBC agreed to certain rules regarding the format. That's been resolved, though; the only question remaining is who will make the cut — that will depend on upcoming polls, as the network is only allowing candidates who average 3 percent support or more to participate in the forum. They're looking at you, Rand Paul.