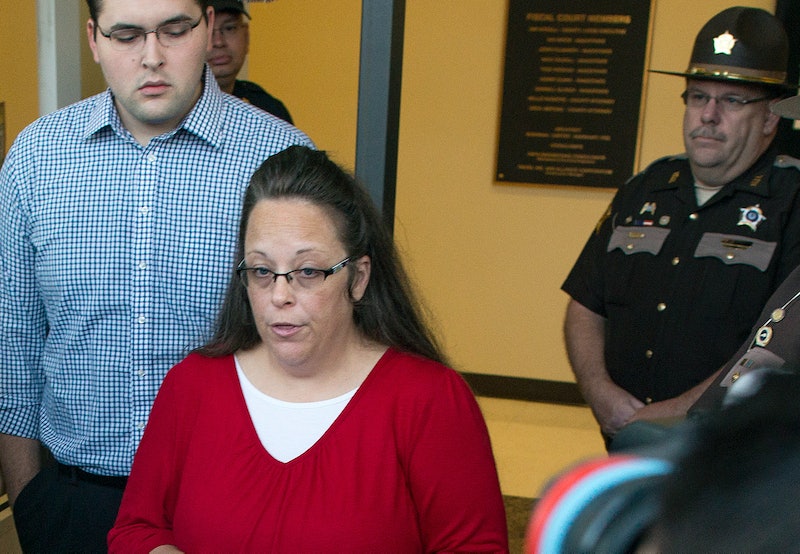 Kim Davis doesn't have a shortage of enemies. After refusing to issue marriage licenses to same-sex couples as a clerk in Rowan County, Kentucky, Davis gained national attention for her actions. Davis was held in contempt of the Supreme Court's landmark ruling legalizing gay marriage and spent six days in jail. While many people have been quick to criticize Davis, some conservative Christians see Davis as a modern-day martyr, fighting for what they believe are their religious rights. That's why it's so surprising that the Westboro Baptist Church blames Kim Davis for gay marriages and plans to protest her office on Monday.

On Friday, the Westboro Baptist Church tweeted that its members would be picketing outside of Rowan County Courthouse, where Davis' office is, on Monday morning. The church tweeted a press release that included an image of a poster reading "God hates adultery," referencing Davis' divorces. "That man that Kim Davis is living with, and calling her husband, IS NOT!" the Westboro Baptist Church said in a press release. "Her husband is Dwain Wallace, who she married when she was 18-years-old. It does not matter how many years you pile on! It was adultery at the beginning, adultery in the middle and it is indeed adultery today!"

In its press release and on Twitter, the Westboro Baptist Church has claimed that "fake" Christians like Kim Davis paved the way for gay marriage by getting divorced. Once enough people made a mockery of traditional marriage between opposite-sex couples, the church argues, it was easier for same-sex marriages to be recognized, since second and third marriages were being recognized as well. Even if you disagree with everything the Westboro Baptist Church stands for — as most people do — it's still funny that this is the group's logic about gay marriage. For all Kim Davis has done to stop same-sex marriage, the idea that she could have helped achieve its legality is truly the definition of irony.