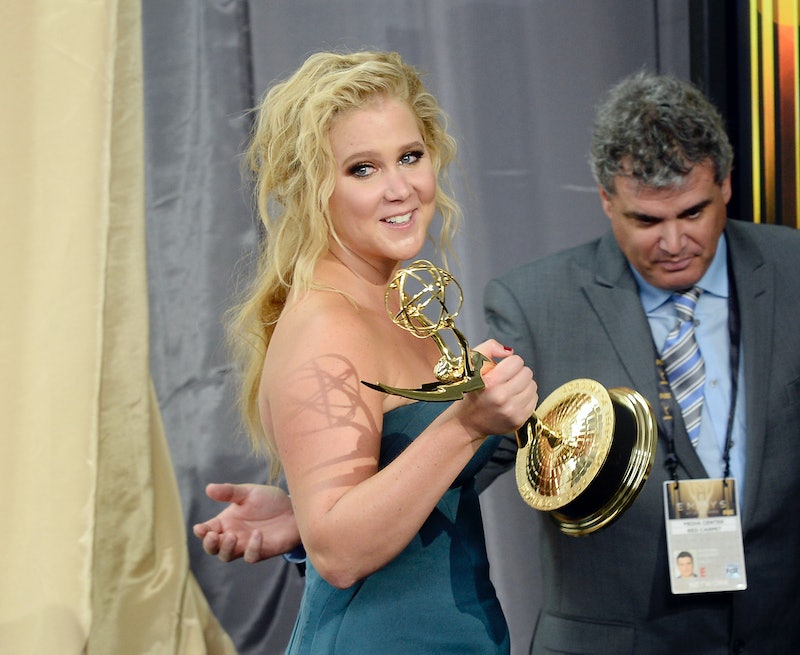 Not that long ago, it would have been shocking to see inspiring headlines like these in the mainstream media. The fact that it's not shocking — although it does remain a pleasant surprise — should be inspirational all on its own. When you add in the fact that these stories touch on long-hushed issues, like body image and gender roles in the workforce, this roundup packs an all-around motivational punch.

Perhaps what is most inspiring about these stories are the people who have told them. They're the advocates that women need in modern society: our peers in other countries, the women we put up on a pedestal, and the leaders we need around the world. (I mean, come on — if Amy Schumer and Jennifer Lawrence aren't among your dream BFFs, then I don't know who is.)

I always knew that J. Law (not Katniss Everdeen) was the hero we all needed. Lawrence wrote a much-talked-about op-ed in Lena Dunham's newsletter Lenny Letter, in which she talked about how she lost out on millions of dollars because she felt so much pressure to be liked that she didn't negotiate harder for salaries equal to those of her male counterparts. If you haven't read it, you absolutely should. Here's a sneak peak to convince you:

All I hear and see all day are men speaking their opinions, and I give mine in the same exact manner, and you would have thought I had said something offensive.

As you can see, Lawrence's argument goes beyond salary. She highlights a systemic issue in which women feel the need to be polite and quiet, when men don't feel that same need. Insert the preach emoji here.

In Brazil, roughly 15 women are killed each day as a result of domestic violence. Fortunately, the women highlighted in this story are working to change that. For instance, Panmela Castro gives women a voice through art, using graffiti — traditionally a male activity — to literally illustrate the growing feminist movement in Brazil. There may be a long way to go, but it's inspiring to see their work nonetheless.

On Sunday, Henriette Reker became the first woman to be election mayor of Cologne in Germany. But she made headlines the day before when she was stabbed in the neck and hospitalized. Her alleged attacker reportedly disagreed with her views on allowing refugees into the city. She was attacked her standing up for her political beliefs, and she'll lead anyway. You go, girl.

If J. Law is the equal pay icon we need, then Amy Schumer is the body image icon we need. On Friday, she sat down with Today's Maria Shriver to talk about her past struggles with self-confidence and what she's doing to help other young women avoid those same struggles. "I'm coming out like, 'OK, here's what's going on: No one is just naturally thin. Everyone is starving,'" Schumer said.

5. A Husband Says He Misses His Wife's Flaws

A boudoir photographer named Victoria Haltom shared a message that one client's husband sent to her following a photo shoot. He wrote that although the pictures are beautiful, "they are not my wife." The wife asked for all of her flaws to be Photoshopped out, but her husband had the reaction we'd all want from our significant others. "When you took away her cellulite, you took away her love of baking and all the goodies we have eaten over the years." Thank you, anonymous husband, for setting new and inspirational #relationshipgoals for all of us.

From powerful women to supportive men, it's encouraging to see feminist role models taking over the news cycle. Keep these stories in mind this week as you take on the mirror, the workplace, and the world with a #girlboss attitude.