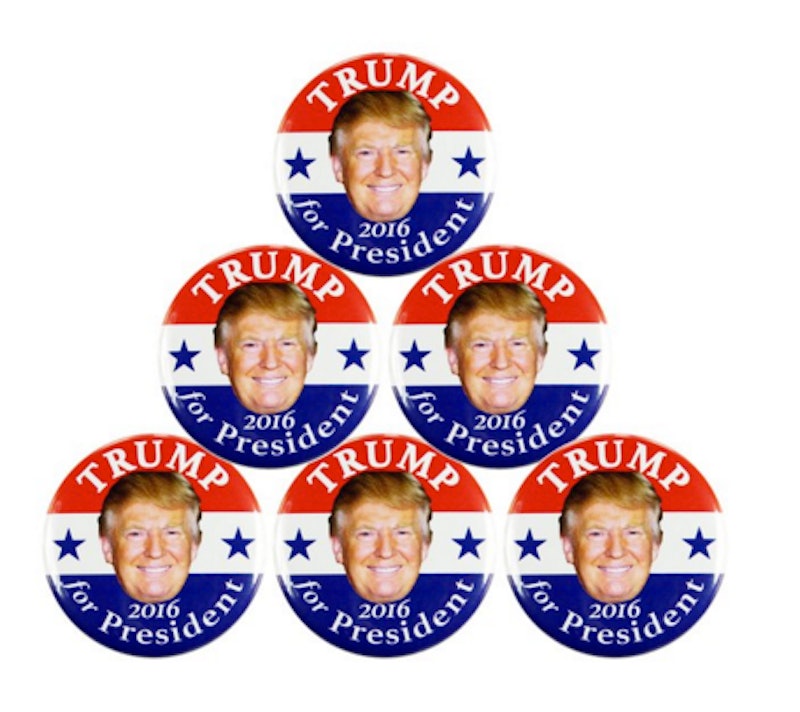 If your family is celebrating Halloween this year, you've probably already had quite a few discussions about potential costume ideas. And if you've got kids, they've probably been planning their costumes for quite some time. Of course, there's no rule that says your family needs to wear coordinated costumes — an alien and a princess in the same family works perfectly well. But if you want to take your costume skills to the next level, why not dress up your family in costumes that complement each other? For an idea that's totally on the news, try these Donald Trump family Halloween costumes.

Even if you don't want to "make America great again," you'll definitely make this Halloween great, and your family will remember the ridiculous costumes you all wore for years to come. According to The New York Daily News, Google predicts that Trump costumes are especially on-trend this season. That's because of next year's election, sure, but more people have been searching for Trump costumes much more frequently than costumes depicting the other 2016 presidential hopefuls. You can do better than just throwing on a wig or a mask, though! Take a cue from these suggestions, and you'll have an awesome time this Halloween.

Donald Trump frequently talks about his daughter Ivanka and her beauty. During September's GOP debate among presidential hopefuls, Trump said he'd put her on the $10 bill. The best part of this costume, though, is that Trump also has four other children: Donald Trump, Jr., Eric Trump, Tiffany Trump, and Barron William Trump. So you can have as many or as few others in the entourage as you want, depending on how many children you have.

Step 1: Have your daughter dress up as Ivanka Trump.

What better way is there to channel Trump's beloved daughter than with an actual Ivanka Trump dress? This one is on sale for $77.62, but your daughter will be able to wear it again at various formal events. A pair of pumps or nice flats completes the look, and a blond wig is a great finishing touch.

Step 2: Have your sons dress up as Trump's sons.

Since Trump's sons don't have their own fashion lines, there are fewer rules about how you should dress up. Adding a Trump 2016 pin to a suit is a good start, and "Hello, my name is ..." name tags with the names of Trump's sons will let everyone know whom you're all dressed as.

2. Donald Trump And His Three Wives

Many people have found irony in the fact that Trump defends "traditional marriage" when he's been divorced twice. To illustrate that point, why not go as Donald Trump, his current wife Melania, and his former wives Ivana and Marla?

Step 1: Choose the family member with the best smize to go as Melania Knauss-Trump.

Whether it's you, your daughter, or your partner, whoever dresses up as Melania should seriously have smizing down to a science. Dark eyeliner will help emphasize your eyes, and any neutral-colored cocktail-length dress — or formal dress, if you want to go all-out — will complete the look.

Step 2: Have the family member who's the best actor (or the biggest cheese) go as Trump's second wife, Marla Maples.

Maples is almost as well-known for her television and Broadway acting gigs as she is for her marriage to Trump, so if one of your children or cousins is particularly given to dramatics, this is the perfect costume for, say, a teenager.

Step 3: The family member who's the biggest socialite should go as Trump's first wife, Ivana Trump.

Ivana Trump is a noted model and socialite, and during her marriage to Donald Trump, the couple were some of the most powerful influencers in Manhattan. This is your (or your sister's/daughter's/partner's) chance to act like a Manhattan socialite, even if it's just for a night. Carrying around a mocktail in a fancy glass will complete the costume.

Trump doesn't shy away from dinging his competitors, but he's taken particular aim at fellow Republican presidential hopeful Jeb Bush. Most recently, Trump said Sunday that he could have prevented the 9/11 terrorist attacks, while Bush has praised his brother George W. Bush's leadership in 2001. You don't have to mention the specifics, though — Trump and Bush are both recognizable figures who work perfectly as a couple's costume for same-sex families. And if you've got more family members, the GOP clown car of presidential hopefuls has enough figures to go around who you can dress up as this Halloween.

Step 1: Get a Donald Trump wig.

The wig is essential to any Trump costume. This popular wig option from Amazon is $15.49 and perfectly captures The Donald's look.

Sure, you could just wear a striped red or blue tie, but if you really want to complete the look, why not wear one of Trump's official ties? This one is $49.99 on Amazon, but you could always wear it again after Halloween (and hope no one asks you what brand it is).

Step 3: Get a pair of wire-framed glasses for the Jeb Bush costume.

Jeb Bush's look is a bit easier to recreate than the Donald's, since he doesn't have such a signature hair look, but nailing the glasses is essential. These $12.95 frames are just Jeb enough — and they don't instantly look like you're borrowing your mom's reading glasses. A silver wig and a Jeb! campaign pin will complete the look.

If you're more of a fan of the "You're fired!"-era Trump than of his presidential campaign, use this Halloween as your opportunity for a throwback (but still relevant) costume. The best part of this look is that a variety of people have appeared on The Apprentice over its 14 seasons, so you've got plenty of options to choose from.

Step 1: Whoever's going as Donald Trump should start with the Trump wig, a suit, and a tie.

You don't need to invest in the Trump tie for this look. Any solid-colored blue or red tie paired with a white shirt and a black suit will look just fine. The most important accessory here is an angry, dissatisfied scowl.

Step 2: If you don't know which apprentice to dress up as, Bill Rancic is a great place to start.

Rancic was The Apprentice's first winner. Since completing his one-year contract with Trump, he has gone on to host several TV shows, such as the Food Network's Kitchen Casino. Another bonus to this costume is that one of your family members could also dress up as Giuliana Rancic, his wife.

Step 3: If you want a feminist counter-costume to Trump, Kendra Todd is a good Apprentice choice.

Todd was the first woman to win The Apprentice, in the show's third season. She has a background in real estate, so if any members of your family are smooth talkers, a Todd costume could be a great fit. It's a low-maintenance look, too — a gray or black skirt suit with a nice blouse (and possibly a name tag) is all you need.

If your family is divided among political lines, or if you're more left-leaning, an opponent from the opposite political party might be a better choice than a Jeb Bush costume to pair with a Trump getup. Bonus points if you break into an impromptu debate during a Halloween party.

Step 1: The Trump wig, a suit, and a red tie are best for this costume.

Adding a Trump 2016 campaign pin is essential for this look, too — you'll want to both be wearing presidential campaign pins to emphasize the costume. Bonus points if you add on a red Donald Trump 2016 baseball cap.

Step 2: A Hillary Clinton mask makes for an easier costume than a wig.

But if you want to wear a wig, or just style your hair like the former secretary of state's, you do you. The most important part of this look is perfecting the Clinton-like pantsuit.

Carly Fiorina might not be Donald Trump's most formidable opponent in the GOP primary race, but "Look at that face!" is still one of the most memorable phrases from the 2016 election season. This is a perfect costume for you and your partner, or any other family member who won't be offended after hearing you say "Look at that face!" about a million times on Halloween.

Step 1: Add on a spray tan to the Trump wig and suit combo.

Since this costume is all about Trump's comments on physical appearance, it's only fitting to play up one of the most noticeable aspects of his appearance. You don't need anything expensive for this look — tan in a can is just fine for what we're going for here.

Fiorina tends to wear skirt suits rather than pantsuits, so if you've already got one in your closet, that works great for this costume. If you have long hair, pinning it under or wearing a bob-length brunette wig will complete the look — along with a Fiorina 2016 campaign pin, of course.

We can't guarantee that this costume won't be unsettling to your neighbors, but you'll definitely make a statement if all of your family members dress up as Donald Trump this Halloween. There are plenty of Trump costume options, so you can still have a lot of variety in your family's costumes, even if all of you are dressed as the same person.

Adults and older children who don't mind wearing a Trump wig for an extended amount of time should sport The Donald's signature hair. If you want more variety among the costumes, get creative — windblown Trump and golfing Trump are both hilarious variations.

There's no shortage of frightening Trump Halloween masks for sale online. For children who might complain of itchy heads and take wigs off, masks are an easier and more breathable option. This Trump mask is $21.99 on Amazon, and is probably more frightening than any ghost or zombie costume you'll see on Halloween.

Step 3: Even babies can dress up as Donald Trump for Halloween.

You probably won't be able to keep a wig on your baby for too long, but this tuxedo onesie from Amazon will have even the tiniest tot looking more like The Donald.