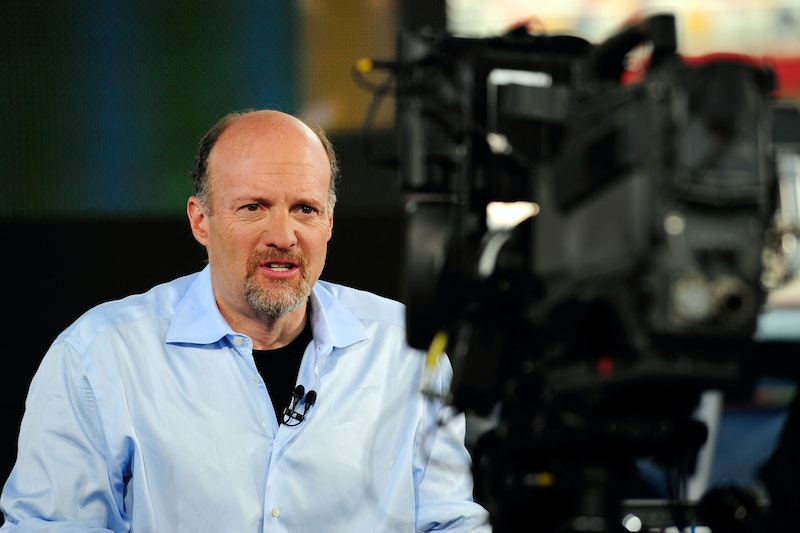 The third GOP presidential debate, which is scheduled for Oct. 28, will have more moderators than the Democrats have candidates. One is Jim Cramer, the perpetually-caffeinated host of CNBC’s Mad Money. Cramer — who, contrary to what your eyes might tell you, is not the same person as Louis C.K. — has made a name for himself with his unique combination of financial advice and cartoonish on-screen antics. So, in honor of his upcoming stint in presidential politics, we thought it appropriate to revisit Jim Cramer’s most memorable moments.

Cramer is best known for making financial planning “fun” for average viewers. The set of his show is replete with props, sound effects buttons, and heavy metal music, which he uses to great fanfare while dishing out investment strategies to viewers. But he’s had his share of controversies, too. In 2006, Cramer was subpoenaed by the Securities and Exchange Commission in connection with a market manipulation scheme, though he emerged from the investigation unscathed. He also once gave an interview that, viewed through a certain lens, could be interpreted as endorsing illegal trading practices.

But hey, all’s well that ends well, right? Cramer still alive and kicking, and in less than two weeks time, he’ll be grilling the Republican candidates in front of a live audience. To get a taste of what they’ll be in for, let’s take a look at what Cramer's best known for.

In 2007, Cramer went on a raging tirade against then-Federal Reserve Chair Ben Bernanke, who he perceived as being out of touch with Wall Street. Slamming his fist against the table, Cramer screamed with such intensity that you can almost feel the veins popping out of your own neck.

In an interview that once against showed Jon Stewart as a crusader for common decency, Cramer went on The Daily Show in 2009 to talk, ostensibly, about the financial collapse. But Stewart ambushed him, playing incriminating clips of Cramer discussing practices that, in his own words, “I’m not gonna say... on TV.” Cramer later claimed that The Daily Show had promised not to use clips of him during the interview.

One of the highlights of Mad Money is the Lightning Round, in which Cramer takes viewers’ calls and answers their financial questions, one after another, in a rapid-fire manner. On the show’s one-year anniversary, Cramer celebrated the occasion during the lightning round by throwing a chair into the wall.

Cramer had a little bit of fun during a segment on restaurant stocks, dressed in an apron and messing around with various meals assembled in his studio. “Now we’re gonna be talking about whipping up some sales!,” Cramer said excitedly. He illustrated what he meant by furiously whipping a bowl of chicken with a whisk until the majority of it was on the floor.

It seems impossible that Cramer would have occasion to interview Redfoo, one half of electro-rap duo LMFAO, but as it turns out, Redfoo used to be a day trader. Cramer hosted the rapper/financial expert and, dressed in an outfit that’s probably never been seen on CNBC before or since, Redfoo dished out advice on tech stocks.

When it comes to financial advice, there’s no such thing as a fool-proof, guaranteed tip. When a viewer asked Cramer in March 2008 whether he should be worried about the prospects of investment bank Bear Stearns, Cramer was unequivocal. “No!” he screamed, “Bear Stearns is fine!” Less than a week later, Bear Stearns’ stock price dropped 92 percent, and it soon went belly-up.