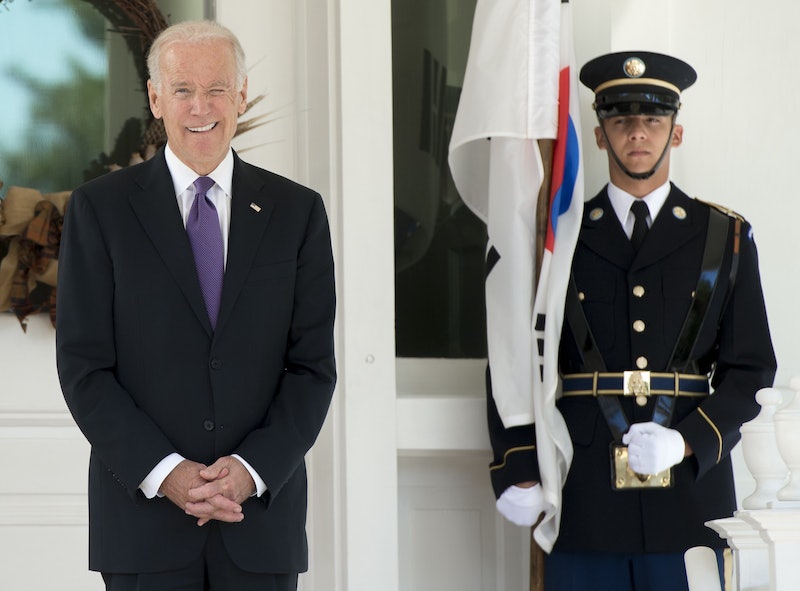 It looks like post-debate polls could affect Vice President Joe Biden's decision to run for president. A new CNN/ORC poll found that most viewers of the first Democratic primary debate thought that former Secretary of State Hillary Clinton had the best performance, with Vermont Sen. Bernie Sanders close behind her. Though polls still show that Biden — who didn't even participate in the event — is still in third, with 18 percent support, they also show that his support dropped significantly after the debate, especially among viewers.

CNN found that 31 percent of registered Democrats watched the debate. Those Democrats viewed both Sanders and Biden more favorably after the event. Sanders' favorability jumped to 84 percent among viewers, while Biden's rose to 89 percent. But favorability apparently doesn't exactly mean that they want him to run. After watching the debate, 61 percent of Democrats thought that Biden should not run, which stands in contrast to the much lower 43 percent of people who didn't watch the debate and thought he shouldn't run.

And experts and political analysts apparently agree with Democrats' immediate perceptions. One told Politico that the debate was "not a good night for Joe Biden," while The Chicago Tribune wrote that the vice president has "missed his moment."

John Podesta, the chair of the Clinton campaign, told MSNBC after the debate that Biden either needs to make his entrance now or not make it at all:

If Vice President Biden wants to enter and compete for the presidency, then it is time he make that decision. I think that we will have a healthy and respectful debate amongst friends about the direction of the economy, the direction of foreign policy.

Then again, Biden doesn't seem to care about the talk around whether there's room for him in the 2016 campaign. Three days after the debate, Ted Kaufman, Biden's former chief of staff who replaced him in the Senate, sent an email to Biden supporters telling them to be "ready" in the event that Biden decides to run. The email included a note about Biden's decision and a rough outline of what his platform would be:

If he runs, he will run because of his burning conviction that we need to fundamentally change the balance in our economy and the political structure to restore the ability of the middle class to get ahead. And whether we can get a political consensus in America to get it done ... And what kind of campaign? An optimistic campaign. A campaign from the heart. A campaign consistent with his values, our values, and the values of the American people. And I think it's fair to say, knowing him as we all do, that it won't be a scripted affair — after all, it's Joe.

So even though Democrats polled post-debate don't seem to think that Biden should enter, their opinions, and the poll in general, might not even matter at all. Steve Schale, an adviser to the "Draft Biden" group encouraging Biden to run, told Business Insider that Biden's decision to enter the campaign was a "personal question" rather than a matter of whether his window of opportunity has closed:

Secretary Clinton had a very good night, and while she was definitely the class of the stage — that stage did not approach the same caliber of room we saw in the '07 debates. There was nothing I saw [Tuesday night] that doesn't indicate an opening for the Vice President.

Another Democratic strategist told Business Insider that, "if you're the vice president of the United States," it's hard to think that a debate would influence your decision about whether to run for president. What's clear is that Biden's decision will be unscripted, and it would shake up the race markedly for Clinton and Sanders.