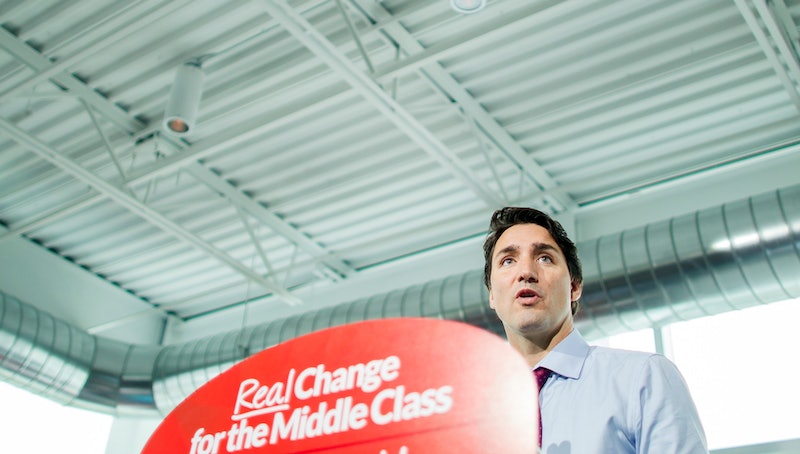 On Monday, Canadians headed to the polls to elect their next prime minister. Among other things, the Canadian election will affect climate change policies in North America and, indirectly, in other countries. The incumbent Conservative Party, under current Prime Minister Stephen Harper, isn't well-liked by environmentalists or President Barack Obama's administration, because it has pushed hard to begin construction on the Keystone XL pipeline. Conservative leadership has been in control in Canada for nine years, so it's unclear whether a liberal candidate could even accomplish much when it comes to climate change policies that environmentalists would back.

Harper is in a neck-in-neck fight with Liberal Party candidate Justin Trudeau, who has pledged to push for a "pan-Canadian framework" for combating climate change. It's unclear what that actually is, and the Liberal Party has generally been vague about carbon emission reduction targets for the country. So far, we know that the liberal election platform committed to a $2 billion Low Carbon Economy Trust, which would help fund projects that help reduce carbon emissions, and also said it would phase out subsidies for fossil fuels.

Members of the Conservative Party, in contrast, still consider climate change a theory that includes "alarmist claims," according to an advertorial written by Conservative Parliament member Cheryl Gallant. The Conservatives have been touting a promise the prime minister made during the Paris climate summit to reduce carbon emissions 30 percent by 2030 measured on a 2005 baseline. But the environmental group said that this promise was made on a sector-by-sector basis, meaning that the party could exclude certain sectors from having to abide by the measure. One sector that was left out of the commitment was the Alberta oil sands, which DeSmog said is the fastest growing source of greenhouse gas emissions in the country.

In a summer panel on climate change, former U.N. Secretary-General Kofi Annan said, “Australia and Canada appear to have withdrawn entirely from constructive international engagement on climate." Trudeau, whom the Guardian wrote is actually "nominally pro-Keystone," has promised to work with Canada's provinces to put a market price on the country's emissions.

The even-more-leftist New Democratic Party candidate, Thomas Mulcair, is in close third behind Harper and Trudeau, and he has called for a national cap-and-trade system, which would "see Canada's emissions drop by 80 percent" by 2050. Further, the targets and commitments in the NDO platform would be legislated, which DeSmog Canada said would make them much harder for future governments to reverse — a win in environmentalists' eyes.

Whether either of these candidates could successfully pass such commitments or policies is another question entirely, but Roland Paris, a professor who studies international security and governance at the University of Ottawa, told the Guardian that they would at least make an effort:

I think that what you would see very quickly with a Liberal government led by Justin Trudeau is first of all a change in tone, a more conciliatory tone. I don’t think that you would get the hectoring [like you get with Harper], and that would be true both for relations with the U.S. and Mexico.

Trudeau is the only candidate who has directly addressed Canada's strained relationship with the U.S., and he has made it clear that Canada should make more efforts to cooperate and help find solutions to climate change. Any move away from Harper's party would mark the Canadian government's first move away from big oil and toward pro-environmental policies in almost a decade.