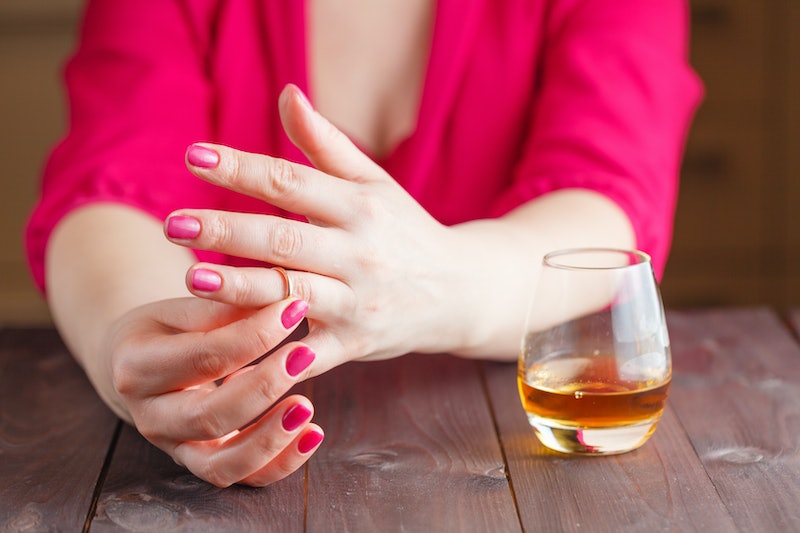 The link between marriage and well-being is pretty established at this point, thanks to a panoply of studies on the topic, including a major Canadian study from 2013 showing that marriage is more positively correlated with "personal well-being" than having kids or making lots of money. General correlations between marriage and health and happiness, though, get rather foggy when marriages are separated between happy and unhappy ones. Wendy Birmingham, a psychology professor at Brigham Young University, wondered whether a marriage needs to be very happy, or just kinda-sorta happy, to influence health. The results of her study, which were recently published in the Annals of Behavioral Medicine, showed that "ambivalent" or "bad" marriages have a negative impact on health. In fact, these ambivalent marriages had a negative impact on health.

In Birmingham's study, good health was rather narrowly defined as good blood pressure reading results, and happiness was deduced from measures of "interpersonal functioning," which were calculated from a collection of self-reported answers about satisfaction with one's spouse. But here's the thing: Only 94 couples were involved in the study, so it wasn't exactly a huge sampling. Of those 94 couples, about three-quarters of the marriages were categorized as "ambivalent," and one-quarter as "happy." The results showed that only the couples in very happy marriages had lower blood pressure and greater degrees of self-reported satisfaction with their spouse.

In other words, there should probably be a footnote to all these marriage, health, and happiness studies. Marriage makes you happy — unless your marriage is awful. And if it's not quite awful, but just kinda-sorta-okay? It's still bad for you. So basically, it seems a happy marriage makes you happy and healthy. (Duh.) Or at the very least, it lowers your blood pressure.

It seems pretty obvious that a bad marriage is bad for you, and a good marriage is good for you. Marriage and well-being studies can be misleading because even if there's an overall positive correlation between marriage and happiness, the results might be totally different if the marriages are divided into different categories. The aforementioned Canadian study analyzed data on 165,000 British citizens and found that married couples who specifically perceived their spouse as being their best friend had the highest levels of happiness.

It might not be marriage itself, then, that leads to well-being, but simply living with someone who you get along with really well. The 2013 Canadian study found that couples who weren't married, yet who were happily co-habitating, were also more likely to have high levels of well-being than single or divorced people. Still, even these happily co-habitating couples didn't show as strong a well-being effect as their married counterparts.

But what about people who aren't in a long-term relationship, whether married or unmarried? Are they banished forever to the land of ill health and unhappiness? Definitely not, says Bella DePaulo, a psychologist who points out in Psychology Today that many marriage studies are flawed because they only take into account people who are married right now, and people who are single right now. In doing so, they don't always looking at what happens to study participants in the future, or what they were like in the past. DePaulo also points out that many of the "single" people in marital studies are divorced or widowed, and many of the married people will later divorce. "[These studies] tell us about the implications mostly only for those who get married and stay married. For those who marry and then divorce or become widowed, the implications may be very different," wrote DePaulo.

And here's another problem with the research: Many studies listing participants in the "married" category only include those who stayed married for the entire duration of the study. DePaulo analyzed results from a 2012 meta-analysis of 18 major marriage studies, and found that at least 11 of them included in the married category only those who stayed married. In other words: "The designs were biased in favor of making marriage look good," DePaulo wrote.

Still, Birmingham's new study is far less complicated than other marriage studies because it doesn't compare married people to single people; it merely compares happy marriages to ambivalent marriages. Birmingham thought it was important to single out ambivalence as a marriage category because these so-so marriages are often neglected in favor of analyzing very happy or very unhappy marriages. "Sometimes we think of marriage as this 'happily ever after' where everything is bliss and happiness," Birmingham said in a Brigham Young press release about the study. "But the truth is, marriages contain varying levels of positivity and negativity."

If Birmingham's study is correct, then, the key to health — or, possibly, just low blood pressure — isn't just a good marriage; it's a great one. (No pressure or anything, right?)

More like this
This Psychological Effect Might Be Keeping You From Hitting Your Goals
By Lexi Inks
19 Latinx Therapists & Mental Health Experts To Follow On Instagram
By Kaitlyn Wylde, Naydeline Mejia and Lexi Inks
Chelsea Clinton On The Best Advice She Ever Got From Her Mom
By Brianna Kovan
21 Signs You're Not In Love Anymore
By Sara Altschule, Kathleen Ferraro and Carolyn Steber
Get Even More From Bustle — Sign Up For The Newsletter