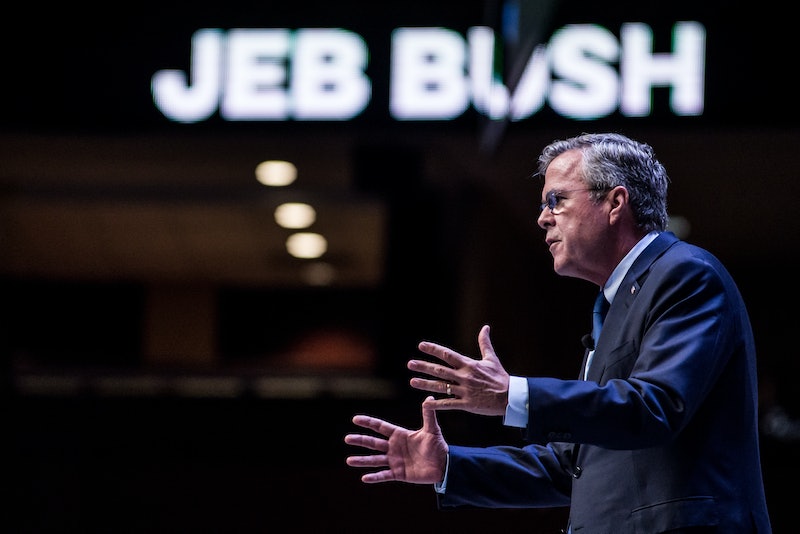 Listen, Jeb. You seem like a nice enough guy, some I'm going to give it to you straight: No one wants another George W. Bush presidency, even those who voted for him, and building a third Bush campaign around your brother's heroism is no way to run a presidential bid — no matter how much good press you think it will garner. As far as most of us are concerned, drudging up your brother's name at all is a terrible, terrible move.

That's right. Just when Americans thought they were finished with the tumultuous George W. Bush era, the younger Bush went ahead and dragged us right back. Headlines like "Jeb Bush Finds His Fight" and "Jeb Bush defends brother's legacy against Trump" have peppered news sites for the past few months, since Trump first infamously attacked the elder Bush brother on Twitter in early July.

"You mean George Bush sends our soldiers into combat, they are severely wounded, and then he wants $120,000 to make a boring speech to them?" Trump wrote on July 9, commenting on the former president's alleged charity appearance fee at an event for veterans the day before. Sure, it was a nasty barb that was a bit mean-spirited, but Donald Trump has been Donald Trump for a long time, and the Bush camp should have known better than to take the bait (this is a man, after all, who one day earlier implied in a now-deleted tweet that Bush's love for his "Mexican-American" wife Columba rendered his judgment on illegal immigration obsolete).

Unfortunately, they did. Rather than responding directly to the inflammatory tweet, Bush replied in kind by upping his rhetoric level to DEFCON 1 in the proceeding months. He might not have understood at the time, but that one subtle shift in strategy would eventually be his downfall, as was evidenced over the following few months (in all honesty, a little inexcusable because it was so foreseeable).

During a speech at the Ronald Reagan Presidential Library in Simi Valley, California this past August, Bush finally went on the offensive, defending his brother's decisions to involve the United States in a war with Iraq by turning the blame for the ensuing rise of the Islamic State on President Obama and Hillary Clinton instead. "[Their premature troop withdrawal plan] was the fatal error, creating the void that ISIS moved in to fill," Bush claimed. He then added that the troop surge pushed by his brother had kept the country and the United States safe, saying, "We saw in the Iraq surge how Islamic moderates can be pulled away from extremist force ... [Clinton and Obama] stood by as that hard-won victory by American and allied forces was thrown away."

Critics leapt at the opportunity. "This is a pretty bold attempt to rewrite history and reassign responsibility," Clinton adviser and former State Department official Jake Sullivan said in a comment to reporters that week.

But Bush wasn't finished yet. Stacking even higher onto the pile of absurdities, the former Florida governor decided to take the opportunity to respond to rival Trump's claims that Bush's elder brother had somehow been responsible for 9/11. "When you talk about George Bush, I mean — say what you want — the World Trade Center came down during his time," Trump said in an interview with Bloomberg anchor Stephanie Ruhle.

"How pathetic for @realdonaldtrump to criticize the president for 9/11," Bush retorted in a scathing, albeit absurd tweet on Thursday last week. "We were attacked & my brother kept us safe."

Playground smack-talk ensued, and Media Matters research fellow Oliver Willis responded appropriately by tweeting a graph that showed the massive number of American deaths from terrorism on the former president's watch (3,045 to be exact). "That time @JebBush's brother 'kept us safe'," he joked in the caption.

Never one to miss out on good political carnage, Trump inserted himself boastfully into the narrative once more on Sunday this week. "Look, Jeb said 'we were safe with my brother — we were safe!'" said Trump in an interview on Fox News Sunday. "I'm not blaming anybody... but the World Trade Center came down." Adding insult to injury (and obviously understanding that his riotous George W. attacks were working), Trump then tweeted on Sunday afternoon, "Jeb, why did your brother attack and destabalize [sic] the Middle East by attacking Iraq when there were no weapons of mass destruction? Bad info?"

There was no need for another weak Jeb! response (even though the beleaguered candidate attempted to give one in a semi-coherent Benghazi rant to CNN's Jake Tapper on Monday). As Vox's Ezra Klein pointed out on Sunday, Trump had easily uncovered Bush's Achilles heel, one that would surely cause the former governor's downfall — and he wasn't going to let up until the one-time Republican darling's campaign was completely in over its head.

Jeb Bush had one job going into this 2016 election cycle, which was to do anything but drudge up his lineage, his brother's tenuous legacy, or the Iraq War in order to maintain a legitimate shot at the White House.