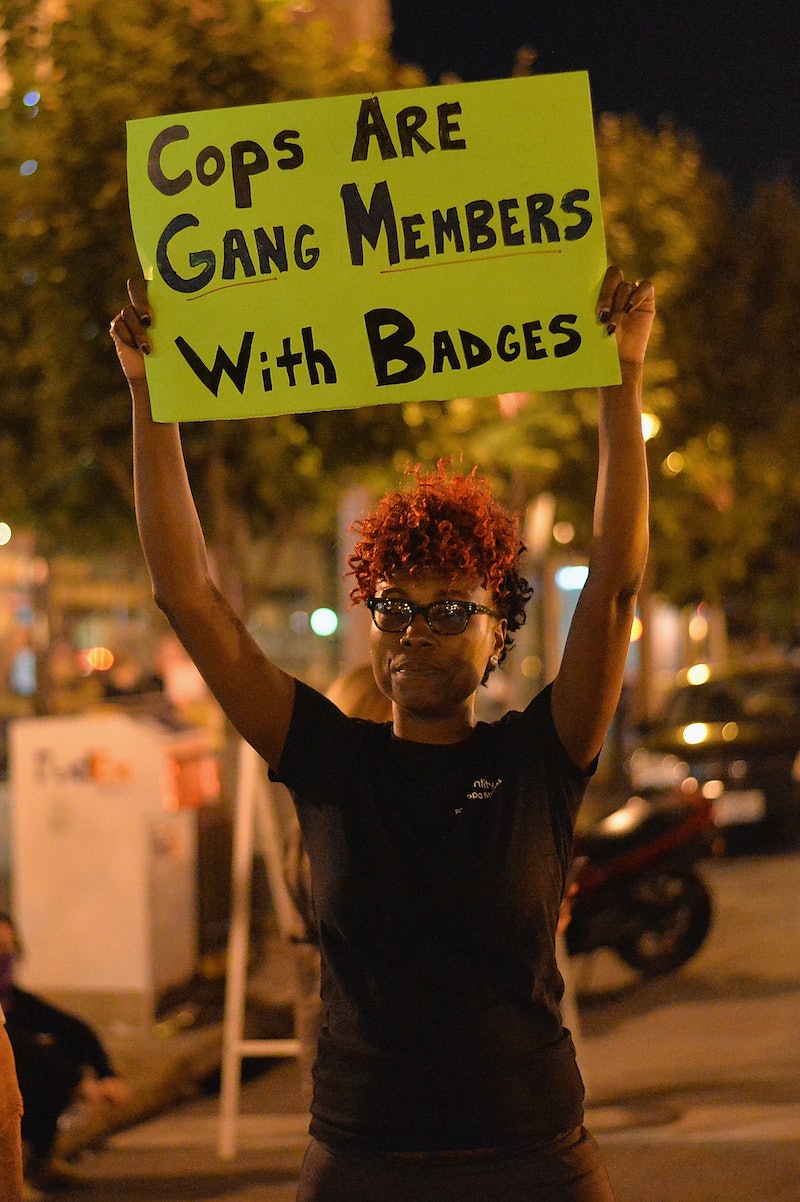 On Friday, a Georgia court found two officers not guilty of manslaughter in the death of 22-year-old Matthew Ajibade. While the jury did convict two officers and one jail nurse on minor charges, there will be no direct conviction in the death of Ajibade, who was allegedly tortured with a taser while in police custody (though the Savannah police claim that the force was justifiable). This case has not gotten the same amount of attention as those of Michael Brown, Freddie Gray, Sandra Bland, or many others. But Ajibade's death deserves just as much national press coverage.

On Jan. 1, Ajibade was arrested outside a Savannah gas station after a domestic dispute. His girlfriend, who initially called the police, said that Ajibade was diagnosed with bipolar disorder three years ago, and was suffering a bipolar episode. According to NBC, she gave a bottle of his medication to the officers who took him away ― though neither she nor his family wanted Ajibade to be taken to jail, and instead requested that he be taken to a hospital. Ajibade forcibly resisted the arresting officer, however, and was cuffed and arrested for battery and obstruction.

Surveillance video from the arrest shows Ajibade resisting the arresting officers. At one point, he grabs an officer's stun gun. Three officers were injured during Ajibade's resistance. In turn, police kicked and punched him in the head and other areas of his body. The police then allegedly took him to an isolated cell and strapped him to a restraint chair. Video footage released by police months later shows the officers using a stun gun on Ajibade repeatedly in the groin while he is restrained. Unlike in the earlier video, in which Ajibade resists police and is wrestled to the ground, he appears motionless and nonresistant while being tasered.

Later that night, Ajibade was found unresponsive in his cell, and the on-duty nurse was unable to revive him. A coroner ruled the death a homicide.

In the officers' defense at the trial's conclusion last week, one of the accused claimed that the night of Ajibade's death had been a chaotic one for the Savannah police department, and said they had lost several deputies after a busy New Year's Eve. Another officer who was present the night of the death commented at the trial that the force used against Ajibade by the officers "was justified." In a statement released May 6, the sheriff acknowledged the tragedy of the death, and reported full compliance with the pending investigation.

After an eight-day trial which concluded Friday, the officers and a jailhouse nurse on duty at the time were found not guilty of involuntary manslaughter. They were found guilty of lesser charges: aggravated assault, cruelty to an inmate, perjury, and falsifying public records. One officer allegedly falsified a restraint chair log ― a document police officers are required to update every time they check up on an inmate who is forcibly restrained. Georgia state law requires these inmates to be monitored regularly, in case they are harmed in the restraints. The Daily Beast reported the two officers allegedly did not monitor Ajibade, and instead left him unattended for an hour and a half before he was found dead. In front of the grand jury in June, one of the accused officers denied falsifying the log. But The Savannah Morning News recently reported that the same officer later admitted to making a misstatement about the log during the grand jury hearing.

The Savannah police repeatedly ignored public demands for evidence associated with Ajibade's death. Months after his death in January, both the police and the jail refused to turn over video footage, official reports, or other information that could explain how Ajibade, a physically healthy young man, died while in police custody. The Chatham County police told a local NBC affiliate "no comment" when they were asked about the delay in the release of information.

"There has been this philosophy of disrespect and then covering up for it," Mark O'Mara, the attorney who represented the Ajibade family, told CNN.

In May, the county sheriff fired nine deputies who were indirectly connected to Ajibade's death. The video footage, which is connected to police stun guns and begins recording automatically when a stun gun is used, was finally released a week ago and used by prosecutors at the trial. The video was shown to jurors, but apparently was not enough to convict the officers of manslaughter.

Ajibade joins the slew of African Americans who have died at the hands of police and received increased media attention as a result of the #BlackLivesMatter movement. His case has been reported nationally, but it has not received nearly the same amount of press as the death of, say, Sandra Bland. The differences between the cases points us to why. Bland's case attracted a lot of attention because she was guilty only of a minor traffic violation. Ajibade, meanwhile, was arrested for a domestic dispute immediately. But that doesn't make his death any less unjust or deserving of attention.

Many complications hindered justice in this case, from the day Ajibade was arrested to the jury's decision on Friday. To recap: There was the arrest of a mentally ill young man, whom family members claimed should have been taken to a hospital. There was the violence and neglect he allegedly suffered in jail, which ended in his death. There was a months-long citywide, statewide delay in the release of video evidence. There were the lies allegedly told by police officers in front of a grand jury. With so many failed opportunities to secure justice for this young man, it's truly shocking that more people are not taking to the streets to protest these events.

Some of these issues have been addressed by the defense. The officers isolated Ajibade because they believed his violent behavior to be dangerous. One of the officers testified that the force used against Ajibade "was justified." And the officer present that night admitted that she falsified the times on the restraint log.

After the jury's decision on Friday, the victim's cousin, Chris Oladapo, said in a statement through his attorney: "I am not surprised by the verdict. I knew that that same system that failed Matthew would not be the system that got him justice." Maybe all of us, like Oladapo, simply can no longer be shocked by another black life lost.