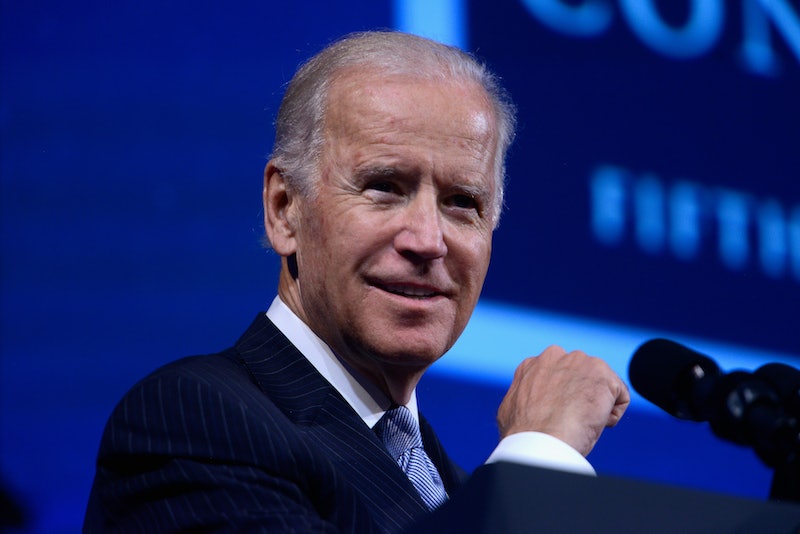 After many months of speculation, it's finally official: Joe Biden is not running for president. On Wednesday afternoon, the vice president formally made a statement, appearing alongside President Obama in the Rose Garden of the White House. "As my family and I have worked through the grieving process, I've said all along what I've said time and again to others," he said. "It may be that that process ... closes the window. I've concluded that it has closed."

"While I will not be a candidate, I will not be silent," Biden added, going on to deliver what sounded awfully like a campaign speech — albeit a tweaked one.

Biden's presidential ambitions have never been a mystery. He's run twice before, once in 1988 and once in 2008. But whether he would run in 2016 was always a trickier proposition. Clinton is a big reason for this. She and Biden served high-ranking posts in the same administration, and that makes it difficult to contrast their recent actions in office, since they rarely acted in opposition to one another. They also have a genuinely warm friendship with one another, according to the authors of HRC: State Secrets and the Rebirth of Hillary Clinton.

"Even when they were opponents in the [2008 Democratic] primary, anytime someone would mention his name around her, she would get this little smile," a Clinton aide was reported saying in the book. "She really likes him. He really likes her."

That sort of affection would have made it hard for them to run campaigns against one another. Beyond their personal rapport, Clinton and Biden share many of the same donors, and as candidates, they're somewhat similar. Both are former senators who've spend decades in Washington and have a track record of compromising with Republicans. While Biden is slightly more liberal than Clinton, most notably on foreign policy, the ideological gap between the two is far smaller than, say, the one between Clinton and Bernie Sanders.

But despite the risks, Biden had strong reasons to jump into the race. For one, he has the support of organized labor, a longstanding pillar of the Democratic coalition. Earlier this month, several Clinton donors defected from her campaign in an attempt to push Biden into the race, while other Clinton supporters have been giving money to Biden's super PAC on the side. Biden knew, in other words, that he'd have a strong financial base from which to draw if he ran.

And lastly, there was the matter of Biden's son Beau, who passed away from brain cancer earlier this year. According to New York Times columnist Maureen Dowd, Beau told his father to run for president while on his death bed. Needless to say, that would be an excruciatingly difficult entreaty for anybody to ignore ― let alone a notorious family man like Joe.