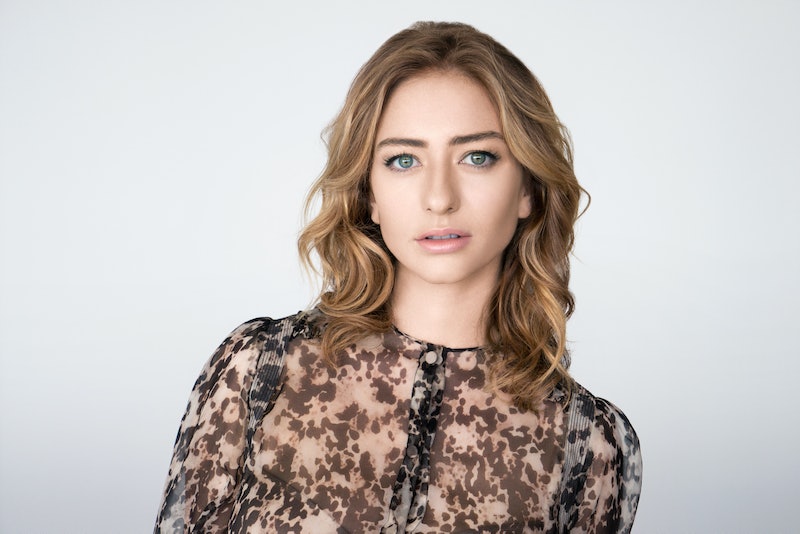 When it comes to the case of Whitney Wolfe versus Tinder, there are two narratives. In one, a young woman is written out of a "frat-like" startup, her pivotal contributions as a co-founder denied. According to court documents, Wolfe claims she came up with the app's name, and spearheaded its marketing plan to quickly gain traction with college-aged users. While Tinder isn't legally allowed to discuss the suit, and declined to comment for Bustle's story, others dispute that narrative. But whatever the truth is — or whatever story you choose to believe — the fact remains that Wolfe is a complex feminist figure in tech. And her story might have started with Tinder, but it continues on her terms.

This is the second time in nine months that I've chatted with Wolfe as the dust cleared from the legal fallout with her former company. In January, months after she settled an incredibly public sexual harassment and discrimination suit against the company she co-founded, she was nervous. An hour after the interview wrapped, she called me again, second-guessing everything she said and wondering whether the story should run at all. It was obvious that the wounds were still fresh.

Things have changed since then. The 26-year-old has been actively promoting her new dating app, Bumble, which takes a female-first approach to creating matches by requiring women to start the conversation. Whether in a Vanity Fair Q&A or an appearance on The Daily Show, it's clear Wolfe isn't shy about sharing her pro-women message these days. "Every single person on this planet should be a feminist," she tells me. "We should all want equal rights for men and women."

When I ask Wolfe if she's a feminist, she doesn't hesitate to say "absolutely." She says she hasn't always claimed to be a feminist, because she didn't truly understand the term until recently. She's embarrassed to admit that, but she's always believed in feminism's values and calls for equality. She adds that, "Misogyny is contagious. If you're surrounded by people that have a misogynistic attitude, it can rub off on you."

Tinder is very much out of sight, out of mind for Wolfe. She has no ties to the company she co-founded other than the equity she still owns. In fact, she's extremely averse to talking about Tinder — which parent company IAC is on the verge of taking public — and quickly backtracks to ensure any off-the-cuff remark she makes about misogyny is in no way connected to her former company. Her avoidance is likely for legal reasons (she reportedly settled her sexual harassment case for about $1 million), but it's probably also personal.

When you look at Wolfe's journey, it's easy to fall back into a Tinder rehash, even as she moves on with her new company. After all, Bumble and Tinder are both dating apps operating in a competitive space for the same users. Both also rely on similar swiping mechanisms by which users approve or pass on potential matches. But that's pretty much where the similarities end. After a match is made, women have 24 hours to message the other person, or else the match disappears forever. (In same-sex pairings, either person can initiate a chat.) Since its December launch, Bumble has made 50 million matches, and Wolfe says that around two-thirds of them turn into conversations, which means that yes, women are making the first move.

The idea behind Bumble is pollinating. In January, the app reached 100,000 downloads. As of October, it has well over one million users, and more than half of them log on every day. And Wolfe says that Bumble has consistently seen 55 percent month-over-month user growth. That kind of engagement and growth is surprising for a nascent startup working primarily out of Austin, Texas, but Wolfe isn't afraid to think big. The app is already in talks with potential brand partners, and Wolfe sees Bumble expanding into everything from professional networking to anti-bullying campaigns to even teaching women how to do breast self-exams. She references another app giant, Snapchat, as an example of the endless possibilities in her mind.

"If you were to ask Evan [Spiegel] on Day 1 of launching Snapchat, 'What are you doing? Why are you making this app?' I can guarantee that he had no idea that his platform was going to grow into maybe the next Viacom, into this platform that could take out TV," she says.

Women say that they feel empowered by being able to lead a conversation. Several Bumble users tell me that they swear by the hive of quality men and women who use the app. Wolfe herself uses the app to collect firsthand feedback on how her product is doing.

And what do men think? During one 3 a.m. session, I hop on and start chatting with 31-year-old Matt. His profile says that he's a sales manager and went to California State "Univeristy" Long Beach, and it turns out we also have a mutual Facebook friend. (Bumble connects via your Facebook account to help pull in verified information like your age and education.) Matt says that it's great to have an app that doesn't follow traditional courtship rules. But interestingly enough, he actually prefers Tinder, because he has more success landing a date when he leads the conversation.

"Women have control with who they are interested in, and if they connect, they decide if they actually want to talk to a guy or not," Matt says. "But it feels like there is too much relying on a small tidbit of a person, and sometimes feels a bit one-sided."

In a way, you could argue that Bumble is somewhat anti-feminist, since it doesn't give women and men the same, equal opportunity to initiate a conversation. But that's probably extreme. Matt thinks that's a ridiculous notion. "Feminism does stem from equal rights, but Bumble isn't trying to capitalize the dating game and push for women having full control. Bumble is simply offering an alternative in the dating scene."

According to Wolfe, Bumble evens the field, and makes the game more playable for both sides. "With empowering women, you're also empowering men so this is not just a girls' club," she says. "What we're trying to do is say, 'Guys, you don't have to put on this front of being the aggressor, the 'macho macho' man.'"

My conversation with Wolfe detours from tips for a successful dating profile — "Be yourself!" she says — to a brief mention of her current beau, Michael Herd, who helps run an oil drilling and production company in Texas. As the chat winds down, I realize I can hear a change in the way she talks. There's a confidence behind her words that wasn't there nine months ago, and I want to let her know she sounds different. I hesitate, but it's the kind of compliment that deserves to be heard, no matter the circumstances. So, I think, fuck it. And I tell her.

"That just gave me chills," she says. "That goes to show you can come back from anything."