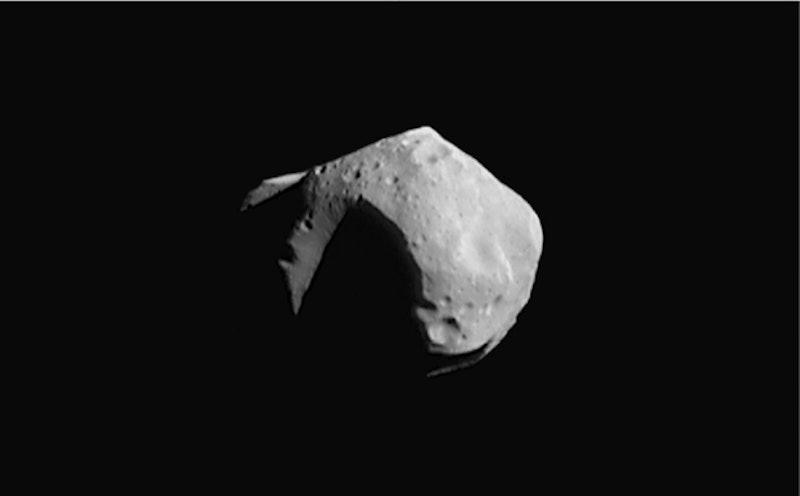 This is what you would call too close for comfort. As families take their kids trick-or-treating without a care in the world this Halloween, little will they know that the holiday could have marked the apocalypse. That's because a giant asteroid will just miss the Earth very soon. While that might sound like the premise of a horror/action blockbuster starring the Rock and Jamie Lee Curtis, it's an actual prediction by NASA. According to the space agency, the asteroid will come closer to Earth than any other in about a decade. That's already scary enough. But even more terrifying? NASA only discovered this near-miss asteroid less than two weeks ago.

Astronomers first spotted the asteroid, whose scientific name is 2015 TB145, on October 10 through the Pan-STARRS telescope in Hawaii. According to their measurements, 2015 TB145 will approach Earth on October 31 at approximately 17:18 UT, or 1:18 p.m. ET. Imagine if it was projected to collide with Earth? That would only leave about three weeks for humanity to process that the world was ending — and for the Rock to save us all.

Fortunately, the asteroid will fly past Earth, missing our planet by a mere 0.00326 au, or roughly 300,000 miles. That might sound like a vast distance, but in space terms, such a proximity is pretty rare. The last asteroid of a comparable size to come so close to Earth was 2004 XP14 in July 2006, and the next one won't be until 1999 AN10 barely misses the Earth in August 2027.

Question: If they've already spotted an asteroid slated for 2027, how did they miss one that's coming at the end of the month?

So what would the damage have been if 2015 TB145 did hit Earth? The asteroid is about 300 to 600 meters (approximately 984 to 1969 feet) in diameter, which is about three to six times the height of the Statue of Liberty. In other words, it's big. And according to NASA, the rock's encounter velocity measures at 35 km/s, "which is unusually high." In 2013, TIME magazine's science reporter Jeffrey Kluger calculated how big an asteroid would have to be to destroy the Earth. And his conclusion? A hundred meters, or 330 feet, in diameter. Yup, that's about a third of 2015 TB145's size on its lowest end.

OK, that's enough horrifying hypotheticals. We will be spared ... this time. And believe it or not, this story has a very positive aspect. Because of its close proximity to Earth and its magnitude luminosity of 10, stargazers will have the opportunity to view 2015 TB145 through telescopes. NASA wrote in its official report:

The flyby presents a truly outstanding scientific opportunity to study the physical properties of this object.

Well, that's one way to put a positive spin on your little oversight.