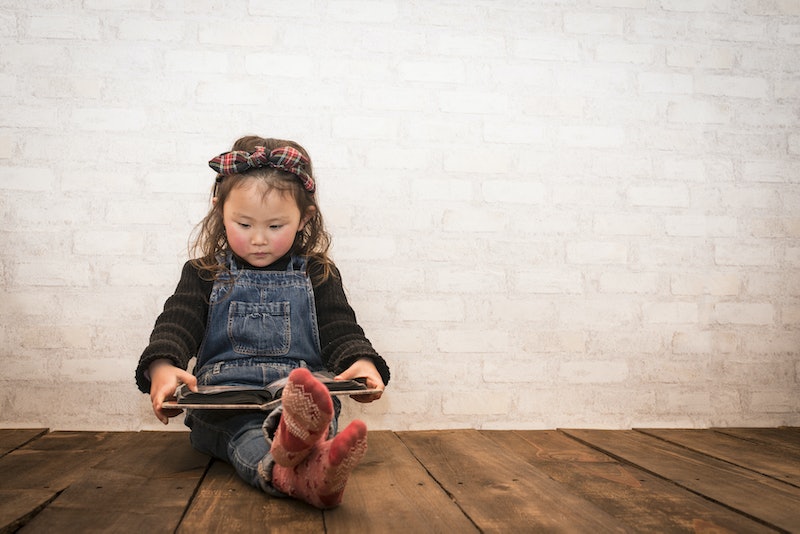 If you were asked to take a wild guess at the kinds of books kids and adults prefer to read, what would you say? I'm thinking your answer would go something like this: Kids are all about fairy tales and magic, whereas adults are more likely to read boring, stuffy nonfiction stuff. (Right?) Wrong. According to NPR, a new study has found that kids prefer nonfiction to fantasy. But adults? We'll take the fantasy any day. The findings, which were published in Imagination, Cognition and Personality, are detailed in a paper titled "Fact or Fiction? Children’s Preferences for Real Versus Make-Believe Stories."

During their research, study authors Jennifer L. Barnes, Emily Bernstein and Paul Bloom of the University of Oklahoma and Yale University set out to determine whether age plays a role in a reader's preference for fictional or nonfictional stories. But in the end, they were pretty surprised by their findings. "The results suggest that despite the surplus of imaginary activity associated with childhood, young children are not more prone to liking 'un-real' stories than adults and may in fact like them less," they wrote in the paper.

Researchers first set out by describing two different books to both four-to-seven-year-old kids and adults, and then asking them to choose which one sounded better. One was a story about a child who found buried treasure, and the other about a child who discovered a dinosaur bone. To control for thematic preferences, half the participants were told that the former story was true, and the latter make-believe. The other half were told the opposite. While the adults were split 50/50 on fact versus fiction, the children were much more likely to choose the true stories.

In another experiment, researchers offered participants a pretty realistic-sounding story about a boy with lots of brothers and sisters, or another about a boy who lived on an invisible farm. This time, the children were split, but the adults vastly preferred the fantasy story.

So if childhood is supposed to be a time for imagination and make-believe, why are these kids choosing nonfiction books? The working theory is that they want to learn, and not just be entertained. While adults have already been there and done that (so to speak), kids are still learning about the world around us. A story about a boy with a lot of siblings might not be all that compelling to you or me, because we've heard stories like that before. But to an only child who's never heard of a family with more than three kids, a story like that would be pretty fascinating. Sure, we can learn from fictional stories, too, but the lessons gleaned from true stories are way easier for kids to swallow than abstract morals from fairy tales.

Make-believe still plays a huge role in kids' development, though. They may not teach children anything new, but playing imaginary games are a way to explore and practice what kids already know, testing theories and pushing boundaries. The main takeaway here? Make-believe is all fine and good, but kids want to learn far more than we even realized. So in other words, if your daughter loves dinosaurs, maybe snag her a biography of 19th-century British fossil collector Mary Anning. You may find that she'd rather get engrossed in that over a fantasy novel about a kid who time-travels to meet a T-Rex. And honestly, that's pretty awesome.