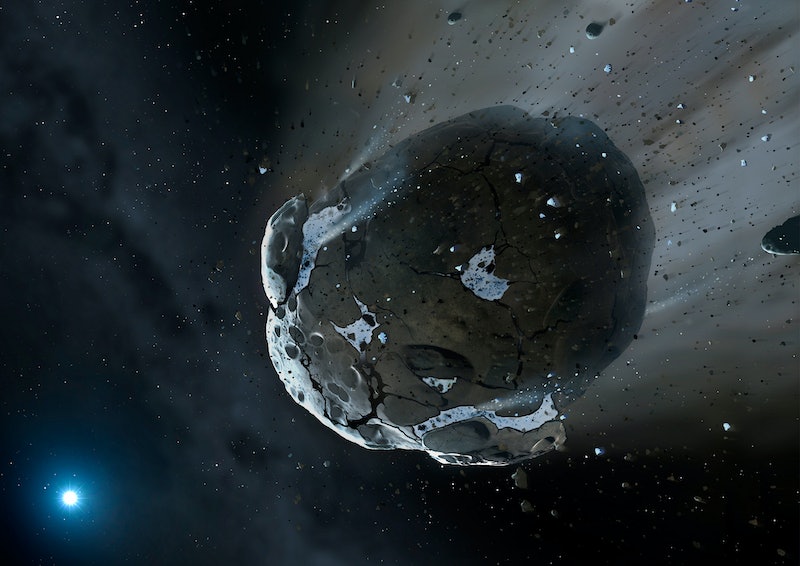 Forget skeletons and ghosts — NASA's Jet Propulsion Laboratory announced something even spookier this week. Scientists confirmed in a report on Monday that an asteroid the size of two and a half football fields was set to fly past Earth on Halloween this year, narrowly (but not dangerously) sweeping by our home planet on its path around the sun. The 260-meter outlier is said to be the last major fly-by until 2027 and should be a pretty exciting event — but can you actually see the Halloween asteroid or will it be too obscured from view to catch a glimpse?

The answer is yes — and no. According to JPL scientists, the asteroid (lovingly named 2015 TB145) will be visible using certain types of telescopes, just not the one you used as a kid to stargaze on a clear night.

"2015 TB145 could reach 10th magnitude [the asteroid's brightness measurement} before sunrise on Oct. 31 for observers in North America, but it will be close to the waning gibbous Moon and probably challenging to see with small telescopes," NASA explained in a report. "After closest approach, 2015 TB145 will be a daytime object and too close to the Sun to observe with optical telescopes."

So while you should be able to nab a view of the asteroid as it makes its way past Earth, you may need to check in with Slooh's online observatory or find someone with a more powerful lens (8 inches in diameter or larger) that will let you take a peek, if you want a really good look.

No nearby observatories or reliable strangers to give you a hand? Don't sweat it. JPL scientists will have their cameras at the ready so that when TB145 does rocket past Earth (traveling at a breakneck speed of almost 35 km/s, or 8,000 mph no less), they'll be ready to snap dozens of incredible, high-res photos to showcase afterward.

"We hope to obtain images with a range resolution as high as 2 m/pixel using DSS-13 (the 70 meter antenna at the Goldstone Observatory in California) to transmit and Green Bank [National Radio Astronomy Observatory telescope] (and possibly Arecibo [the Arecibo Observatory's 300 meter telescope]) to receive," NASA scientists explained this week.

So what makes this asteroid so especially spooky that you'll want to witness it firsthand? It's not necessarily the asteroid's physical characteristics (0.47 km, or in scientific terms, "huge") or Earth proximity (16.3 lunar distances, or just under 4 million miles away) that up the scare factor — it's the discovery of the TB145 itself. According to JPL scientists, the asteroid was only discovered by the Pan-STARRS I survey about 10 days ago — and as one that's been defined as nearly "potentially hazardous," that feels a bit concerning (start conjuring up images of Ben Affleck and Armageddon in your head now).

Still, despite the lack of lead time, NASA says there's nothing to worry about (you can go ahead and stop thinking about Ben Affleck now). "There is no existing evidence that an asteroid or any other celestial object is on a trajectory that will impact Earth," wrote Paul Chodas, manager of NASA's Near-Earth Object office at the JPL, in a press release back in August. "In fact, not a single one of the known objects has any credible chance of hitting our planet over the next century."

So go ahead — mark your calendar with a giant red marker, because Halloween this year is going to be the best one yet — especially if you're an astronomer. "The flyby presents a truly outstanding scientific opportunity to study the physical properties of this object," wrote JPL scientists this week.