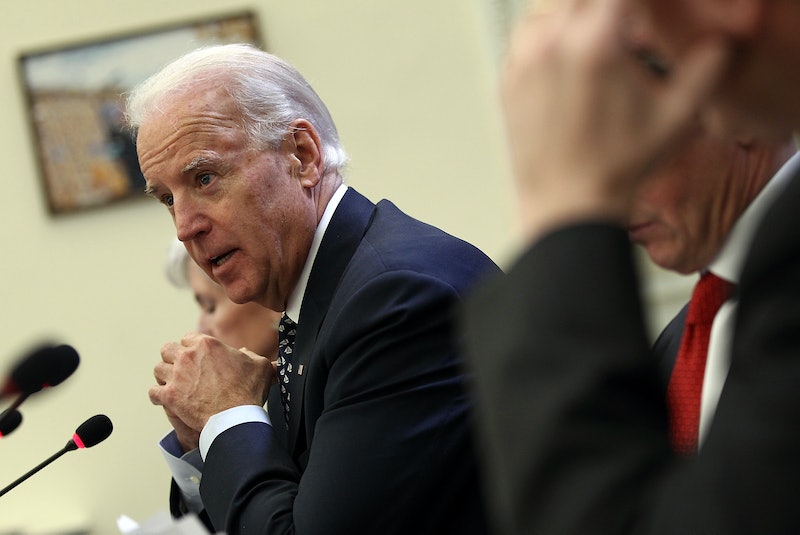 It's looking more and more like Biden has a presidential candidacy up his sleeve. In an interview on Tuesday, Vice President Joe Biden addressed the 2011 raid on Osama Bin Laden and detailed a new version of events in which he gave the final advice to President Obama to authorize the raid. Biden's new story conflicts with a previous statement at a May 2012 interview on Meet the Press, when he said he was reticent about supporting the attack. And to complicate things even further, his new statement directly defies former Secretary of State and current Democratic frontrunner Hillary Clinton's telling of the story, in which she claims she was the last person to advise the President.

This new retelling of Biden's contribution to one of President Obama's most famous days in office is adding fuel to the speculative fire surrounding a possible Biden bid for the presidency. Biden's newest statement doesn't sound like it's coming from a man who's planning a quiet retirement come January 2017. It's coming across as a calculated political move that is further foreshadowing his intention to take a shot at the 2016 ticket.

Historically, there's not much of a precedent for Biden winning the race. Only four vice presidents have gone directly from being vice president to leader of the free world — John Adams, Thomas Jefferson, Martin Van Buren, and George H.W. Bush. And Joe Biden's meme-filled vice presidency doesn't seem like a promising start to four years in the Oval Office.

But there's a lot that's gone on politically that doesn't make it to mainstream media. In 2013, Biden flexed his Congressional muscle to convince former Senate Minority Leader Mitch McConnell not to fall over the fiscal cliff, showing that he's got what it takes to whip Congress into shape. President Obama appointed Biden as the head of a task force on gun-control, and he's been fighting the gun control lobby hard for the last two years, a little known fact that will thrill far-left voters who aren't happy with Bernie Sanders' weaker stance on gun control.

It seems that Biden has every reason to run. CNN was very clear about leaving the option open for Biden to join the first Democratic debate, even with no exploratory committee or official plans in the works. A new poll shows he has a 73 percent favorable rating and already 17 percent voter support, despite the fact that he hasn't even announced. Plus, his male privilege means he likely won't get the sexist criticism that Hillary Clinton, his theoretical main competitor, does about her age, weight, and appearance. His wealth of experience, polling numbers and visibility would instantly put him at or near the top of the race.

While no one can say for sure what really happened on the day that Osama Bin Laden was killed, a potential response from Clinton could mean even more attention for Biden — publicity he could capitalize as a candidate. Whether Biden decides to run or not, the world should know in nine days' time. Biden has to announce by Oct. 29 or he won't be included on the ticket in Georgia.