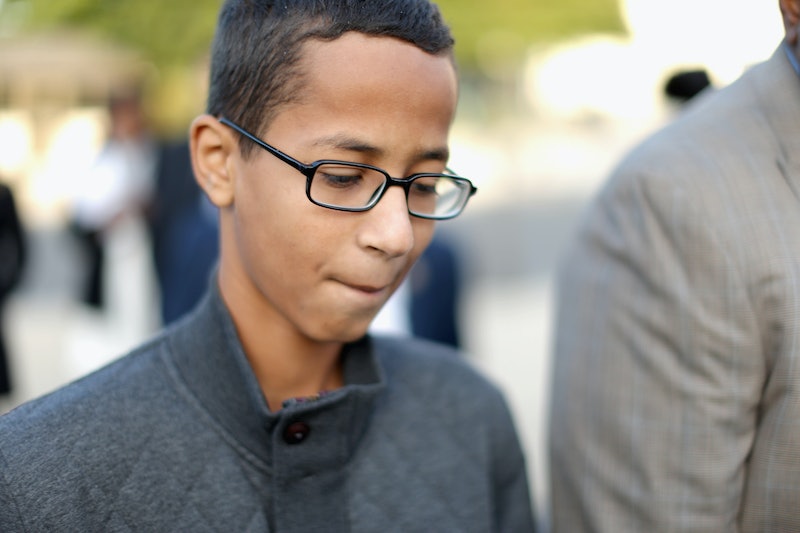 More good news has come out of the "clock boy" story. Following his wrongful arrest after a teacher mistook the clock he'd built as a bomb, Ahmed Mohamed has received support from around the world and has had the opportunity to attend such high profile events as the Google Science Fair as well as the White House's Astronomy Night, which was held on Monday night. He even got to meet the president. What spawned from a negative experience has changed his life for the better. Now, the burgeoning inventor has set his sights on the Qatar Foundation's Young Innovators Program, so Ahmed Mohamed is moving to Qatar, where he will attend school on a full scholarship.

Mohamed was invited to the capital city Doha by the Qatar Foundation for Education, Science and Community Development last month. He toured Doha's Education City at the beginning of October, where Qatar offshoots of universities like Texas A&M and Carnegie Mellon University are based. It was not until recently that Mohamed and his family decided to accept the Qatar Foundation's scholarship. He and his family will be moving within the week. Mohamed released a statement in his family's press release about his experience touring Education City as well as his hopes while in Qatar:

I loved the city of Doha because it's so modern. I saw so many amazing schools there, many of them campuses of famous American universities. The teachers were great. I think I will learn a lot and have fun too.

The Qatar Foundation's primary focus is education, science and research, and community development. Its Qatar Academy educates students from all over the world, catering to early childhood all the way through high school. Copious extracurricular activities are offered, including an annual film festival as well as chances to travel to countries like France and Turkey. The prestigious institution offers students the chance to earn an International Baccalaureate, an opportunity previously unavailable to Mohamed when he was living in Irving, Texas. Prior to leaving the states, Mohamed's parents withdrew him and his siblings from the school district where he was arrested and suspended. His parents had since been home-schooling them.

The science-minded student and his family will be moving to Doha in a week. This next chapter for Mohamed could lead to very big things and further encourage his drive to achieve. In an interview with The Washington Post, Mohamed's sister Eyman said that the attention he's gained following the clock incident has "motivated [him] to work harder than ever before ... because people are going to be waiting to see what happened to that 14 year old kid." The world will be watching in anticipation of what Ahmed will accomplish next. At this point, the sky's the limit.