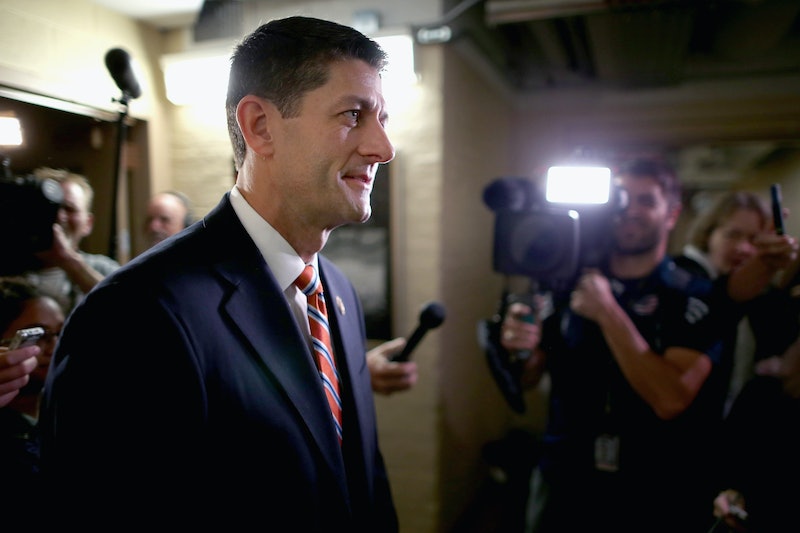 On Tuesday, Wisconsin Rep. Paul Ryan announced he would be willing to rise to his fellow Republicans' call to be speaker of the House, but Ryan has some conditions. They not only separate Ryan from previous speakers, but they also set the stage for a new kind. If chosen by the Republican Party, Ryan will lead House Republicans, but he won't be afraid to delegate when necessary and he'll expect some serious compromises from those he leads. As a result, he'll be a more balanced leader, which could make all the difference in the legislative branch and in the GOP.

Ryan, who rose to prominence as Mitt Romney's running mate in 2012, has been on the short list for the speaker job since John Boehner in September announced he would retire in October. In fact, when House Majority Leader Kevin McCarthy dropped out of the speaker race, Ryan basically became the short list. Republicans in the House and on the outside know that it's time for a leader who can — and wants to — overcome the radical factions that have developed within the party and unite legislators to get work done. They seem to see Ryan as that guy — but Ryan's hesitation reveals just how important his conditions for the job are.

First and foremost, Ryan wants to maintain a healthy work-life balance. "I cannot, and will not, give up my family time," he said in a press conference on Tuesday. The House speaker is responsible for leading on the House floor, but the position is also typically associated with a fair share of fundraising, shaking hands, and traveling even when Congress isn't in session. Ryan isn't up for all that overtime — and, quite frankly, he shouldn't be. He's in a very different position than the speaker we've been used to for the past several years. He's significantly younger than Boehner was, with significantly younger children — and his hometown of Janesville, Wisconsin, is nearly twice as far from Washington as Boehner's. That's a lot of extra traveling and a lot of milestones he could be missing in his kids' lives if he were to let the job destroy his work-life balance.

In choosing to prioritize his family, Ryan has hopefully set a tone for powerful positions throughout government. We obviously need our elected officials to work hard, but at the end of the day, we need them to be human beings, too. We need them to be able to understand and communicate the struggles that we face in everyday life (e.g., balancing a full workload with a family).

Ryan also made it clear that he expects the members of his party to work together in the House of Representatives, something that legislators have always struggled with but lately has caused a noticeable amount of chaos within the GOP. For instance, Republicans like to call each other Tea Partiers and RINOs aka Republicans In Name Only. (Think of it this way: In society, you're either too skinny or too fat. In the GOP, you're either too conservative or too moderate.) The turmoil within the Republican Party reportedly influenced both Boehner's decision to retire and McCarthy's decision not to run for speaker. Ryan has said that although he'll run for speaker, he's not going to tolerate the unproductive chaos.

Ryan's other conditions also seem to point back to this idea of fostering unity within the party, and within the House as a whole. He wants the speaker's role to be that of a visionary, someone who will set the strategy for the House and communicate that to the public regularly. He also wants to bring about some key changes to the rules and procedures that govern the House. Namely, he wants to change the way members can bring about a motion to vacate the chair. By laying out his vision for the speakership, Ryan essentially wants to set himself and his party up for success, so that the House can get back to its job of passing legislation.

Ryan's conditions don't seem like too much to ask — although we don't often associate politicians with a work-life balance. Ultimately, they're aimed at making the speaker, the GOP, and the House of Representatives more productive and more effective. They also show that Ryan wants to be a pragmatic leader. He took his time getting into the speaker race, and he is taking the responsibility seriously. Now, he wants his fellow legislators to do the same.