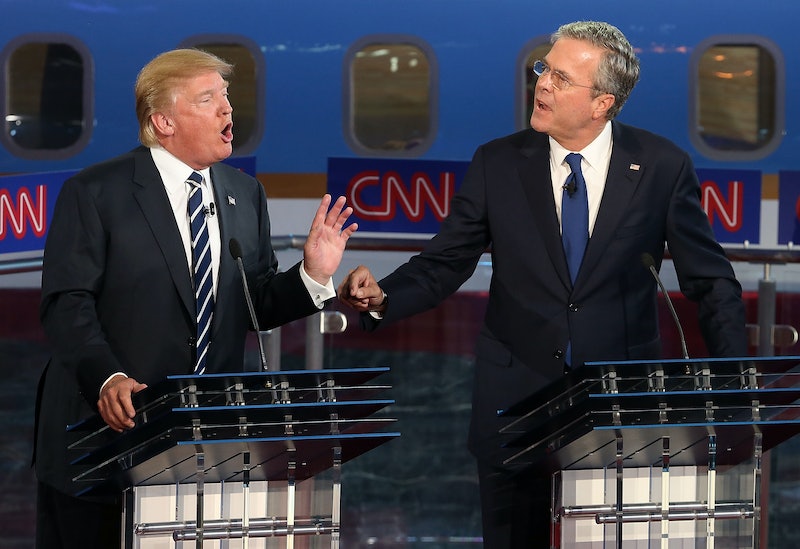 As the third GOP debate approaches, the world is waiting to see who Donald Trump will insult next — but let's not forget about how many terrible things were said about Trump on the debate stage as well. The last GOP debate was a bloodbath, as candidates were encouraged (and more than willing) to heap insults on their competitors and engage in fighting on the stage. Compared to some of the night's flare-ups, Trump looked almost tame. And you almost feel bad for the guy — it's one thing for people to talk smack behind your back, but it's a whole other story to stand there and listen to people rag on you.

And to be completely fair to Trump, it's also worth noting that he was instrumental in seriously improving the upcoming debate, which will be held on Wednesday in Colorado. During discussions among the Republican National Committee, CNBC, and the campaigns, Trump helped secure a two-hour debate format, which means that there won't be a repeat of the CNN debate that lasted anywhere from three hours to a century.

But despite lending a major helping hand to his fellow candidates (and all the viewers at home), Trump is still likely to come under a lot of fire during the third. He was almost completely absent from the first Democratic debate, but he's unlikely to be that luckily this time around. In case you forgot how much his competitors dislike him, here's a review on some of the best insults hurled at him on the debate stage.

When His Seriousness Was Questioned

"The best way to give this election back [to the Democrats] is to nominate a Donald Trump," Bobby Jindal dissed during the second "happy hour" debate. "He is not a serious candidate."

When He Was Called Juvenile

Right before Trump made a sassy comment about Rand Paul's physical appearance, Paul said that there was a "sophomoric quality" to Trump, implying that he was juvenile. Trump then insulted the senator's looks.

On Whether He Could Be President

George Pataki was not amused by how many questions were focused on Trump, and he made it very clear. "Let me say this flat out: Donald Trump is unfit to be president of the United States or the Republican Party's nominee," Pataki said.

When He Was Compared To A Cartoon Character

When People Asked How Level-Headed He Was

In addition to finding Trump juvenile, Paul was also apparently very worried about trusting Trump with national security during the debate. "Would we not be worried to have someone like that in charge of the nuclear arsenal?" Paul said.

When His Show Was Used Against Him

In a suave political move, Scott Walker managed to insult both Trump and President Obama during his debate performance before bowing out of the race. "We don't need an apprentice in the White House," Walker dissed. "We have one right now."

When It Was Made Clear That He's Not Ronald Reagan

While everyone involved in the second GOP debate was working to show how similar they were to Ronald Reagan, Mike Huckabee was looking to prove that Trump was unworthy of the comparison. "As we're sitting here in the Reagan Library ... most of us would like to pay tribute to a guy who didn't get elected telling everybody how great he is," Huckabee said.

When He Was Accused Of Using His Celebrity Status

"I've had my issues with Donald Trump," Rick Perry said during the first happy hour debate, before ultimately dropping out. "I've talked about Donald Trump for the standpoint of being an individual who was using his celebrity rather than his conservatism." Which, from a conservative standpoint, is a pretty big diss.

When He Got Called An Entertainer

One of Carly Fiorina's favorite lines is to subtly dig at Trump by referencing the "entertainer" in the 2016 election. During the debate, she managed to keep the diss going, without ever directly mentioning Trump by name.

When He Got Called A Carnival Barker

Trump was only mentioned once during the first Democratic primary debate, and it was when Martin O'Malley referred to him as "that carnival barker in the Republican Party." Which honestly isn't too bad of a description.

After the intense Trump-bashing that dominated the first two debates, there are only two ways that the third debate could happen. Either the candidates will take a page out of the Democrats' book and try to have a clean debate, or the insults will be worse than ever.