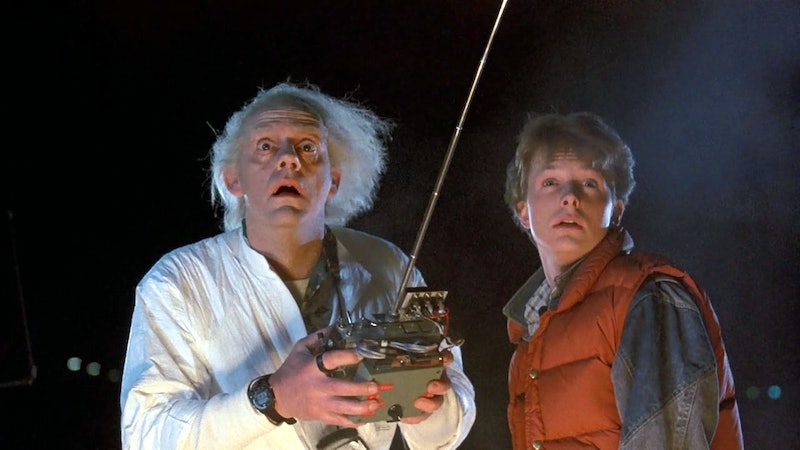 It's Back to the Future Day, because Oct. 21, 2015 is the day that Marty McFly and Doc Brown traveled to in Back To The Future Part II. Many people are celebrating this fun day with silly gadgets or jokes, but others are thinking about how much hasn't changed. Specifically, it's unfortunate to think about how many women's rights issues haven't changed since 1985, when the original Back to the Future film came out.

From more women being present in leadership positions to the steps we're taking in addressing rape and sexual assault on college campuses, it's important to note that many things have changed for women since 1985. But those changes are just small parts of the greater male-dominated system in which we live. And changing everything is going to take decades, if not centuries. It takes a long time to rework a system of dominance that is also interwoven with capitalism and made more difficult to address by the intersections of race, class, and history. Though Roe v. Wade granted women the right to terminate their pregnancies in 1973, there is more to women's rights than reproductive rights (though you'd think the right over someone's body would be a fundamental one, granted without question). Here are five women's rights issues that haven't changed much between 1985 and 2015.

In 1985, women made 64.6 percent of what men made for the same amount of work. In 2015, women make about 78 percent of what their equal male counterparts make, according to the National Committee on Pay Equity. The wage gap has narrowed by less than half a cent per year between 1963 and now. Which is pretty ridiculous, given how high the salaries of CEOs, for example, have risen during that same period. And it's important to note that the gap is even larger for women of color.

In 30 years, pay equity is still something we haven't achieved. And that's pretty damn sad.

Rape Is Still Used As A Weapon Or Punishment

In developing nations, rape is still used as a tool of war or a punishment for women who have disobeyed their husbands. In war, there's often no purported "reason" for the rape at all, except to instill fear and subordination among women in a community. For example, in Liberia, which is recovering after a 13-year civil war, a government survey in 10 counties between 2005 to 2006 showed that 92 percent of the 1,600 women interviewed had experienced sexual violence, including rape. The UN noted that these numbers were probably low, because women in those areas fear retaliation should someone hear them speaking about rape or social shame, since rape is seen as dirty or brought on by a woman's actions.

Think about that. In 2015, when we can cure a number of diseases and a woman is running for president in the United States, there are still areas of the world where rape is used en masse as a way to intimidate. And in much of the world, including the United States, women feel shame for a violent act which was committed against them.

Abortion Rights Are Still Under Attack

Even though Roe v. Wade gave American women the right to terminate a pregnancy in 1973, politicians are still trying to restrict abortion rights around the country. They are passing legislation that makes it harder for women to get abortions later in their pregnancies, or they are passing bills that make it harder for women to attain abortions at all. In other states, such as Wisconsin, people like Gov. Scott Walker have tried to pass legislation that forces a woman who wants abortion to undergo an ultrasound.

Texas, one of seven states with extremely restrictive abortion restrictions, requires women to look at an ultrasound of the fetus, and forces the technician performing the ultrasound to describe the fetus' characteristics. Studies by the Guttmacher Institute found that these forced ultrasounds are medically unnecessary for most abortions, so these kinds of restrictions often have no other use than to attempt to "personify the fetus and dissuade women from obtaining an abortion."

What's more horrifying than how these attacks and restrictions are happening more than 40 years after Roe v. Wade is the fact that they are still failing to recognize the woman carrying a fetus as a person. All of these restrictions claim to protect "unborn babies," but in doing so, dehumanize women and strip them of their rationality and ability to make decisions. Our poor treatment of women who have received or who want abortions shows just how long the road to respect and autonomy is for women.

In June 2015, Tim Hunt, an English biochemist who won the 2001 Nobel Prize in Physiology or Medicine, told a convention of senior female scientists and science journalists that he supported single-sex labs:

Hunt later apologized, saying "I’m really sorry that I said what I said. It was a really stupid thing to do in the presence of all those journalists." But that isn't the first or only time that women in science have been subjected to sexism. A 2012 study found that biology professors, physics professors, male professors, female professors — pretty much a wide array of science people — were biased toward men, even when women performed as well as men.

The #ILookLikeAnEngineer campaign which caught fire in August also highlighted horrible stereotypes about what STEM professionals "should" look like to be taken seriously.

There are two problems here. For one thing, the success a woman can have is still predicted or measured using her attractiveness. And people still think that women, especially women whom they deem "attractive," shouldn't be working in certain fields. Both of these models are outdated. Like, stay-in-the-kitchen outdated. Yet people are still using them in 2015.

We Still Aren't Teaching Kids About Sex And Consent

Sex is a part of our society, and always has been. That's why it's completely shocking and horrifying that we allow parents to remove their children from sex education classes in 35 states. It's 2015. Sex is a vital health issue. More to the point, removing your kids from a sex ed class isn't going to stop them from having sex, according to Advocates for Youth, which found that abstinence-only programs may have harmful psychological and physical effects. But removing students from sex education classes will promote the spread of STDs and unwanted pregnancies, creating a public health problem while also perpetuating a sexual culture of shaming, guilt, and uncertainty that affects women negatively.

Recent movements to address the ambiguity surrounding consent have shown that the issue is larger than just college campuses. For example, only one state in the U.S. mandates that consent be part of sex education for high school students. That's crazy, because consent is a pretty damn important part of sex. Most recently, Ontario passed a curriculum that will teach consent to students in grade two, but that's it. Even though we are aware that rape and sexual assault are a problem, we aren't making any efforts to make sex something that we talk about without feeling shameful.