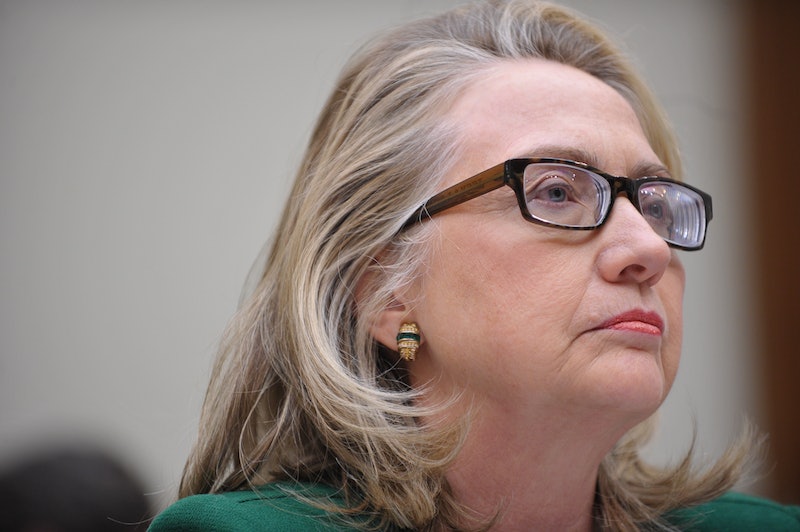 On Thursday, we're all going to get a taste of political theater that could have big implications for the 2016 presidential race, and it seems suspiciously like that might be by design — Hillary Clinton is scheduled to appear before the House Select Benghazi Committee, to deliver testimony regarding the fateful attack on an American diplomatic compound in Libya, amid rampant accusations that the entire committee is more political than procedural. So, what exactly will the hearing hold for her? Here are five questions about Hillary Clinton's Benghazi committee testimony that you might like answered before she sits down to talk.

Make no mistake, this day has been a long time coming for the Republicans, who've been pursuing any possible leads that could implicate Clinton in any wrongdoing all the way back to when the incident took place in 2012. Actually having her answer to the committee now makes this a positively crucial day of reckoning for the House GOP, particularly Rep. Trey Gowdy of South Carolina, who serves as the committee's chair.

Simply put, with an already mounting public perception that Gowdy and the Republicans on the committee are using their platform to go after Clinton politically, if she turns in a strong performance on Thursday, it could really decimate him. If she stumbles, though, it'll give her conservative critics yet more fuel to fight. Here are five questions and answers to help you know what to expect.

The deaths of these four Americans caused an understandable uproar within the halls of government, not least of all because it was just months from a presidential election, and the GOP saw the potential in it — whether there was any wrongdoing or not Clinton's part, there was both a moral necessity and a political advantage in investigating the incident thoroughly. Central to their accusations was the charge that the Obama administration had knowingly obscured the true motivation behind the attack, ostensibly for their political benefit.

In the years since the attack, Benghazi has been used as a very deliberate political weapon, trying to cast doubt and suspicion about the Obama administration's attention to security and competence, as well as then-Secretary of State Clinton's. Also, don't forget about Benghazi acrostics.

It was unprecedented insofar as Stevens' death was concerned — he was the first U.S. Ambassador killed in the line of duty in more than 35 years, which is a fact entirely deserving of the emphasis and attention that Benghazi received in its immediate aftermath.

As for the years-long fixation and recriminations, however, that's kind of new — as has been widely observed throughout Benghazi-mania, the previous Republican administration also presided over a rough eight years in this regard. From 2001 through 2008, there were at least 13 attacks on American diplomatic facilities around the world, leaving more than 60 people dead, as the Tampa Bay Times detailed.

It is true that nobody as high-profile as an ambassador died during that time, and a large majority of those people killed weren't Americans. But that doesn't make the contrast any less stark, and the moralistic opprobrium the GOP's voiced about Benghazi isn't exactly heavy on nuance.

3. Didn't Clinton Do This Already?

This is the first time she'll have spoken to the House Select Benghazi Committee, but she did memorably face a congressional questioning over Benghazi while she was still Secretary of State. She was summoned to testify about Benghazi at a senate hearing in 2013, and it created one of the moments that Clinton's Benghazi critics often fixate on — when she asked "what difference" did it make what had sparked the attack.

If you're looking to get a good sense of how Wednesday's testimony might go, it might be worth giving that 2013 hearing a look. Although it's entirely possible that she'll have a rougher time now than she did back then, considering recent controversy about the committee's alleged political motivations.

4. Why Do People Think The Committee Is Politically Motivated?

Clinton's testimony is coming on the heels of a trio of statements — two by elected Republicans, and one by an ex-staffer for the committee — acknowledging the political effects and/or intents of the Benghazi committee. House Majority Leader Kevin McCarthy, in particular, made the following comment to Fox News' Sean Hannity on Oct. 1.

What you're gonna see is a conservative speaker, that takes a conservative congress, that puts a strategy to fight and win. And let me give you one example: Everybody thought Hillary Clinton was unbeatable, right? But we put together a Benghazi special committee, a select committee. What are her numbers today? Her numbers are dropping. Why? Because she's untrustable. But no one would have known any of that had happened had we not fought.

McCarthy has since renounced the statement, and has apologized for saying it. Gowdy, for his part, was reportedly angry with McCarthy, and described the recent accusations to Politico as "among the worst weeks of my life."

5. How Long Will She Be Questioned?

It's likely to be a while. Just last week, the committee heard testimony from her longtime friend and aide Huma Abedin, and that reportedly ran for about six hours, all behind closed doors. One would assume that the committee would have more questions to ask the former Secretary of State than they would Abedin, however, and ABC News reports that Clinton's testimony is expected to run for eight hours, not including breaks in the action.

On the one hand, that's an awfully long time to stand up to a questioning, but it's hard to predict who that'll favor. Unlike Abedin's testimony, Clinton's will be public testimony, and all televised.