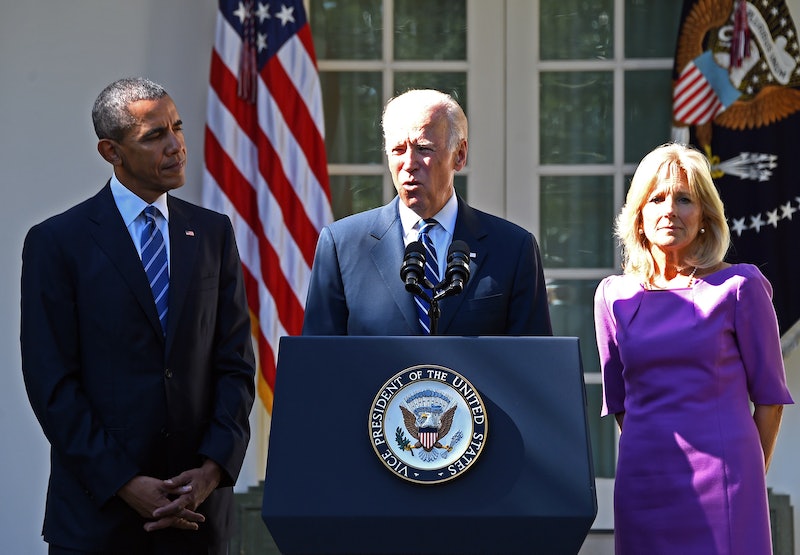 On Wednesday, Vice President Joe Biden finally let the entire Democratic Party in on a long-awaited decision in a statement delivered from the White House Rose Garden. With President Obama and his wife Jill at his sides, Biden revealed that he won't run for president in 2016 ― though the rest of his speech read a lot like a campaign kickoff. He described his politics, his philosophies about compromise, and even revealed what his biggest goal would've been: to be the president who "ended cancer." It's a noble goal, and also a markedly personal one.

Obviously, cancer isn't merely something that's affected Biden personally — his son, former Delaware Attorney General Beau Biden, passed away from brain cancer complications in late May — but rather something that touches almost everyone's life at one time or another. Whether you have or have had it yourself or a friend or loved one is going or has gone through it, it's one of the most common and frightening diagnoses a person can receive. According to the World Health Organization, cancer is one of the world's leading causes of death, with more than 14 million new cases in 2012 and an expected 70 percent rise in new cases over the next 20 years.

In short, as a lofty goal, it's almost a perfect encapsulation of precisely who Biden is, and the political brand he's built through the years — an emotional blending of public and personal interest. Here's what he said in full:

... I believe we need a moon-shot in this country to cure cancer. It’s personal. But I know we can do this. The president and I have already been working hard on increasing funding for research and development, because there are so many breakthroughs just on the horizon, in science and medicine, the things that are just about to happen. And we can make them real, with an absolute national commitment to end cancer as we know it today. And I’m going to spend the next 15 months in this office pushing as hard as I can to accomplish this, because I know there are Democrats and Republicans on the Hill who share our passion, our passion to silence this deadly disease. If I could be anything, I would have wanted to be the president that ended cancer, because it’s possible.

If there's anything that stuck out about Biden's speech on the whole, it was how much he sounded like he really did want to run, chock-full as it was of his ideas and hopes for the future. But the underlying message of his decision not to do so was also clear — he wants to leave his mark on the race in a conversation-influencing, elder statesman role. He wants to use his national platform as a well-liked and respected outgoing vice president, which he would've lost if he'd jumped in.

And championing the anti-cancer battle is an issue more or less perfectly suited for that kind of role — it's a disease which affects millions of Americans each year, regardless of politics or ideology. And the gravity of Biden's personal history with it should allow him to function as a powerful voice across party lines. It'll be fascinating to see what progress the Obama administration can make on this cause, in the year and change it has left.