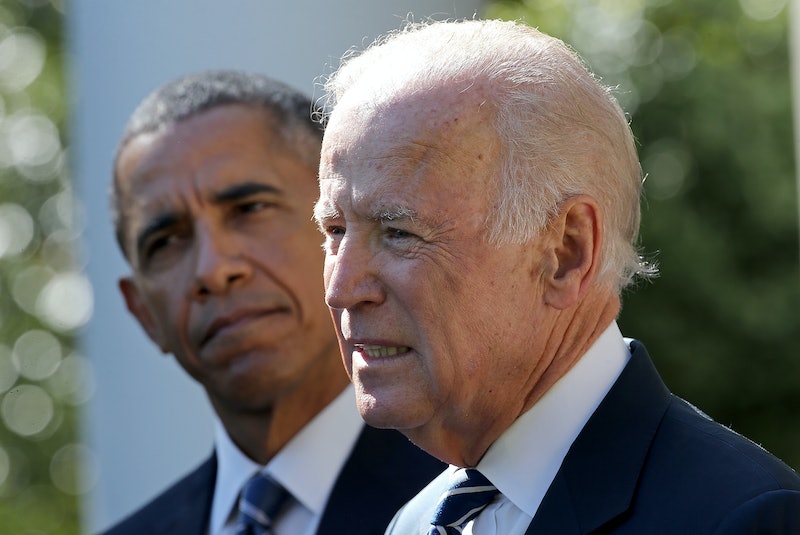 Earlier today, Vice President Joe Biden announced he will not run for President in the 2016 election, answering a question that had been on the nation's mind for the better part of 2015. The Democrat has run for President twice in the past, leading many to speculate that he would run against Hillary Clinton for the party nomination, and all signs indicated that he was seriously considering mounting a campaign. However, Biden said today that he believed the window of opportunity has closed. What makes this especially notable, though, isn't the announcment that he won't run for President. It's his honest and open discussion of the reasons why he made the decision — reasons that largely have to do with the loss of his son, Beau Biden, earlier this year.

"As my family and I have worked through the grieving process, I’ve said all along... that it may very well be that that process, by the time we get through it, closes the window on mounting a realistic campaign for president. That it might close," Biden said in his speech at the Rose Garden. "I’ve concluded, it has closed."

Beau Biden, who was Delaware's Attorney General, was just 46 when he passed away from brain cancer in May of 2015, leaving behind a wife, children, and, of course, his father and step-mother. The loss of Beau Bidens's young life was tragic on its own, but he was also one of several family members Joe Biden has lost over the years, including his first wife, Neila, and daughter, Naomi.

Biden is no stranger to grief, and it's clear that this has affected his decision not to run for President. "As I’ve said many times, my family has suffered a loss, and I hope there would come a time... that sooner rather than later when you think of your loved one, it brings a smile to your lips before it brings a tear to your eyes," he said. "Well, that’s where the Bidens are today, thank God. Beau was our inspiration." However, the family's strength in the face of tragedy doesn't mean he's ready to commit to running for President. Media personality Rachel Sklar pointed out that he is sending an important message by making this decision.

Regardless of your party affiliation, Biden's transparency regarding his son's death is hugely important. For better or for worse, America is a country that values ambition and work ethic over individual emotional health, which has led to a culture of overwork and obsession with productivity above all. As much as this may increase business revenue, it also means that workers are expected to "suck it up" even in the face of life-altering situations.

The grieving process takes time, but we so rarely afford ourselves the opportunity to heal. Unfortunately, the world doesn't pause just because you have a big work deadline coming up — whether it's an important research project or, say, the chance to run for President of the United States. As always, there will be naysayers who claim Biden is making a huge mistake by not running a campaign, but personally, I think he chose well. His decision was no doubt enormously difficult to make, but he's providing an example to grieving Americans everywhere: You don't have to sacrifice your emotional health for the sake of work. Sometimes, life gets in the way of plans, and there's no shame in changing your mind.

Biden will never become President of the United States, but he's still an example to the American people — proof that there is no shame in putting your family above work, and that it's still possible to do good without climbing to the very top of the ladder. As he said in his speech today, "I am absolutely certain we are fully capable of accomplishing extraordinary things. We can do this. And when we do, America won’t just win the future, we will own the finish line."