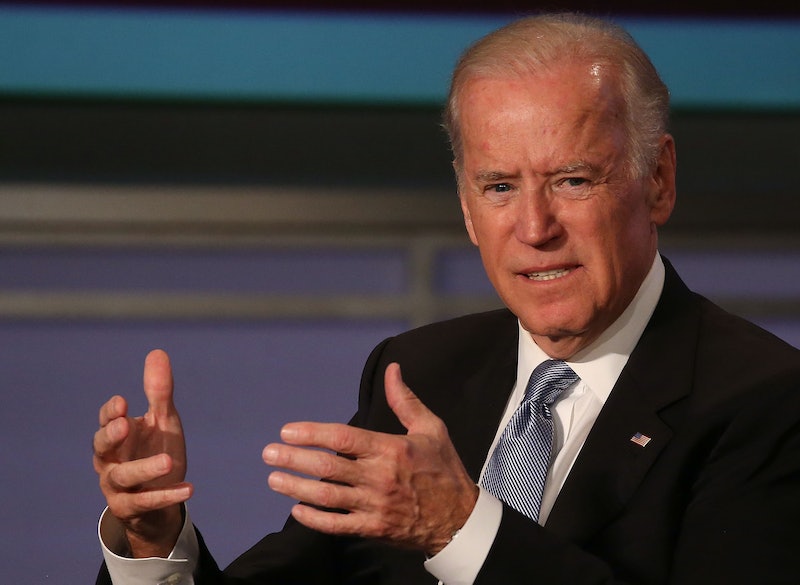 It's official, folks: Vice President Joe Biden is not running for president. And while the announcement will most likely leave many disappointed, Biden has also made clear that he doesn't plan on spending his remaining time in the White House being idle. He's going "push as hard as [he] can" to "end cancer." So what will Biden do to work against cancer in the next 15 months? What actions might he take?

One thing is clear: For Biden, the fight against cancer is very personal. Earlier this year, his son Beau died of complications from brain cancer at the age of 46, after a long fight against the disease. Given that heartbreaking loss, it's understandable that Biden would want to fight for an end to cancer, which remains the second-most-common cause of death in the United States. And there are a lot of things that Biden could do to change that.

One of the most important issues to address regarding cancer in the United States is the need for more research funding. Most such research is funded through the federal government — in fact, the American Society of Clinical Oncology estimates that 14.5 million people are alive today because of advances made via government-funded research. Despite this, funding for cancer research has actually decreased in recent years. Adjusting for inflation, funding for the National Institute of Health (NIH) declined 23 percent between 2003 and 2013, and enrollment in clinical trials funded by the NIH has declined as well. This is terrible, given how many people die of cancer each year, and how many lives could be saved by research that isn't happening due to a lack of funds.

Biden, as a sitting vice president, could use his position to raise awareness of this problem and to urge Congress to increase funding. He could also use his position as a prominent longtime member of the Democratic Party to encourage the party to include increased funding for cancer research in their platform in 2016, as opposed to the vague mentions it got in 2012.

Biden could also work with private charities which fund research, prevention measures, and/or improved screening in order to raise funds himself ― though donations, even from wealthy donors, aren't really the same as sustained federal funding. Still, funding more research and treatment for cancer patients is always a worthy goal — and one that we can help with, as well.

There are a lot of charities which fund research that could be part of ending cancer for good. For instance, there's the Prevent Cancer Foundation, which supports prevention research and better methods of early detection. There's the Cancer Research Institute, which develops immunotherapy approaches to fighting cancer. And there's the Breast Cancer Fund, which tries to investigate and eliminate environmental causes of breast cancer. And unlike many cancer charities or fundraising efforts, all of those organizations dedicate the majority of their funding to programming, not fundraising. To support any of these charities, follow the links above to their donation pages. Every little bit helps.

Whether Biden chooses to seek increased federal funding, raise money for charity, or pursue any other method of making an "end to cancer," it's probably safe to assume that we haven't heard the last from him on this issue. And as someone who has seen multiple family members battle cancer, I for one am eagerly looking forward to whatever action he decides to take.