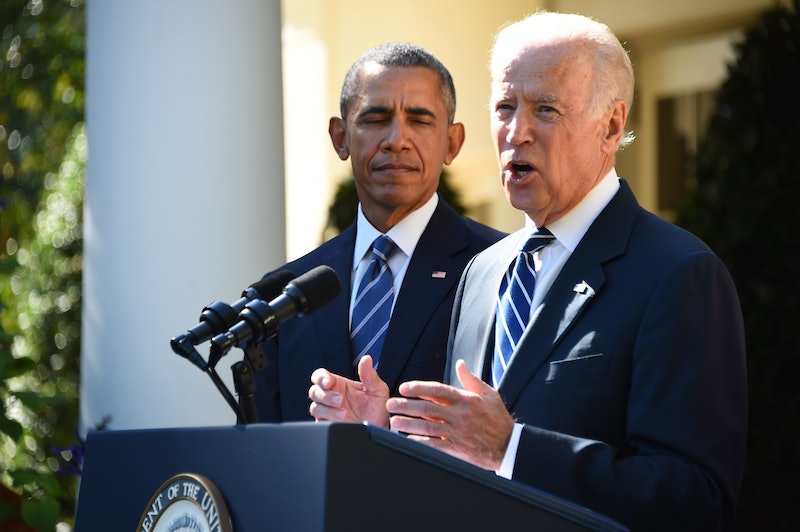 When Vice President Joe Biden announced Wednesday that he would not be running for president in 2016, many were surprised. Pollsters and donors had anticipated (and hoped) that Biden would enter the Democratic primary race, even though he missed the first debate. In a heartfelt speech delivered at the White House Rose Garden, Biden said that there wasn't enough time left for him to plan a successful presidential campaign. But as moving as his speech was, and for as great a vice president as he's been to President Obama, his speech also proves why he shouldn't run in 2016.

Of course, Biden is no stranger to presidential races — he previously ran in the Democratic primary in 2008. And if he had decided to run now, he would likely have had a strong financial backing and donor base. Some of Hillary Clinton's donors tried to get Biden to run. But Biden's speech was surprisingly rambling and fumbling. However heartfelt he was, it wasn't the campaign material we've come to see and expect from the 2016 election.

For example, Biden began the speech by praising "the Obama legacy" and calling it a "solid foundation" for the next president to build on. But instead of offering examples of what that legacy has achieved or what the next president could build on that Obama has done, Biden immediately went into a list of ways the United States could improve its treatment of the middle class. Even that was rambling, with one issue after another being named in a sort of bucket list format:

Children and child care is the one biggest barrier for working families. We need as the president proposed a triple child care tax credit. That alone will lead to dramatic increase in the number of women able to be in the workforce, and will raise our economic standards.

Biden's announcement was heavy on aspiration and light on actual facts. The vice president listed a myriad of issues he'd like to continue working on in the United States: improving the public education system, expanding LGBT rights, providing child care services for working families, and helping the middle class. Those are all great goals, but it's also convenient for Biden to rattle them off in a list without offering suggestions about how to achieve most of them. Biden did mention increasing taxes on "wealthy folks" in order to help the middle class, but that's not exactly a new idea. In that sense, Biden's speech was too soft to be a presidential one. Any candidate can speak freely about the things they'd like to achieve as president ― even finding a cure for cancer, as Biden mentioned:

And I believe that we need a moon shot in this country to cure cancer. It's personal. But I know we can do this. The president and I have already been working hard on increasing funding for research and development, because there are so many breakthroughs just on the horizon in science and medicine, the things that are just about to happen. And we can make them real with an absolute national commitment to end cancer, as we know it today.

Even before Biden's announcement, The New York Times' First Draft blog noted Tuesday that a Biden candidacy would be "messy" because his speeches tend to be sporadic and disjointed. The article came after news that Biden had backtracked on his previous statements about Osama bin Laden and his interactions with President Obama about the 2011 raid. And as Mic's Zeeshan Aleem noted, Biden's policies weren't all that different from Clinton's and the other 2016 Democratic presidential hopefuls', even if he did take a jab at Hillary Clinton during his speech. Biden is, as Clinton said Wednesday, a "great man" — but the Democratic presidential candidates who are running this election season are great in their own ways, too.