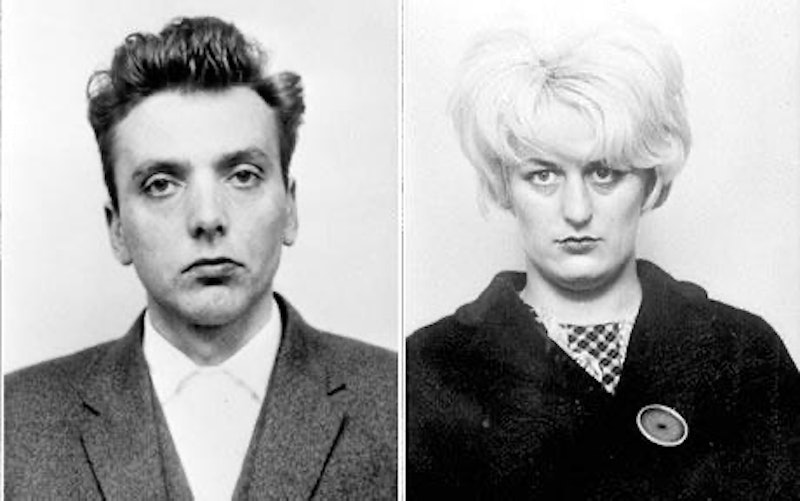 While the mass murderer is often thought of as a lone male, stalking the night for his victims, there have actually been more than a few serial killer couples — male and female pairs who did everything together. Including kill. In many of these relationships, one of the partners is the dominant personality, and the one with the truly murderous personality. Some of these couples started out in a similar way — the domineering man began manipulating his partner. Perhaps afraid of being hurt, the woman would go along with his desires and whims, and get swept up in them.

But that's not always the case. Sometimes the female is the dominant partner in the homicidal relationship. And sometimes the couple is just a perfect combination of two sociopaths looking for love and a companion. But one this is for sure, no matter the dynamics: these couples were extremely dangerous, and incredibly depraved.

It's scary enough to think of one person being capable of going on a grisly rampage. But it's even worse to realize that there are killer couples out there as well — two people willing to take a human life, and get sick satisfaction out of it. But sure enough, there have been plenty of them. And below are some of the creepiest serial killer couples who left a bloody mark on history.

Throughout the early 1980s, Suzan and James Carson were known as the San Francisco Witch Killers. Before starting a killing spree that ended three lives, the Carsons moved to a pot farm, converted to Islam, and began to believe in the occult. According to the couple, they were motivated to kill people that they believed to be witches. They only succeeded in killing three individuals before they were caught, but investigators found a list of future victims that the Carsons believed were witches — including President Jimmy Carter.

During the trial of Judith and Alvin Neelly, Judith was portrayed as the dominant partner and driving force behind the two murders that sent the couple to prison. In 1982, the Neellys abducted a 13 year-old girl from a local mall, sexually assaulted her, and then killed her. According to Alvin, his wife (who wasn't yet 18 at the time) injected the girl with Drano, shot her, and then shoved her body into the Little River Canyon before calling the police. Shortly after the first murder they were on the move again, abducting Janice Chatman and her fiance John Hancock.

The couple sexually assaulted and killed Chatman, and shot Hancock — but he ended up surviving, and went to the police to turn the couple in. Currently, Judith is serving a life sentence in Alabama, and her husband died after surgery in 2005.

In the late 1940s, this killer couple made a name for themselves at the "Lonely Hearts Killers." Martha Beck met Raymond Fernandez through a romantic newspaper ad, and was quickly drawn in. Soon, Beck had abandoned her two children and moved to New York to be with the much older Fernandez, where she posed as his sister. The two would respond to lonely hearts ads in the local paper, and Fernandez would seduce and then rob the women. The two claimed four victims, including a woman and her two-year-old daughter, before being arrested. They were both executed by electric chair on the same day in 1951.

In 2006, Jasmine Richardson was a 12 year-old girl in Canada when her parents told her she had to stop dating her 23-year-old boyfriend Jeremy Steinke. Angry, Richardson retaliated by getting Steinke's help to kill both of her parents and her 8-year-old brother. The two made a run for it but were picked up almost immediately. In addition to being homicidal, Steinke also believed that he was a 300 year-old werewolf, and wore a vial of blood around his neck. Steinke is currently serving three life sentences (which should be nothing for a werewolf of his age), while Richardson will have finished serving her 10 year sentence in 2016.

In the late 1970s, Gerald Gallego was apparently obsessed with the idea of having sex slaves — a dream his wife Charlene helped him obtain. From 1978 to 1980, the couple would lure women from around the country to their van. Gerald Gallego would then sexually assault and kill the women, sometimes within one day. Over the three year period, the couple killed 9 women and one man before being arrested. Gallego received the life sentence for the "sex slave murders", but Charlene agreed to testify against him, and has since been released. According to Charlene, she aims to help train local law enforcement on how to question women who have been abused.

During the 1960s, young lovers Myran Hindley and Ian Brady traumatized Great Britain with their horrific "moor murders." Together, Hindley and Brady kidnapped, sexually assaulted, and murdered five children ranging in age from 17 to 10. After strangling or stabbing their victims, the two would sometimes take pictures with their bodies or grave sites. Eventually, the two were turned in by Hindley's brother-in-law after he witnessed Brady killing the last victim. Despite confessing to all five murders, authorities were able to find three of the five grave sites in the Saddleworth Moors near Manchester. Hindley and Brady each received life in prison, and although Hindley died while incarcerated, Brady — who is concerned the driving force behind the murders — has been declared criminally insane. He's currently serving out his sentence in Asthworth Hospital.

Fred and Rosemary West usually top most serial killer lists due to the horrific nature of their crimes. Over the course of several years, the married couple assaulted and killed at least 12 women, including two of their daughters. The couple, who lived on a quiet British street, would abduct girls and then take turns sexually asasulting them. Some of the women were allowed to live, while others were killed. In 1994, after compiling evidence against the Wests, police found nine bodies buried on their property — although many believe that they were involved in multiple other disappearances. The two were sentenced to prison, where Rosemary currently lives — but Fred killed himself less than a year after being arrested.