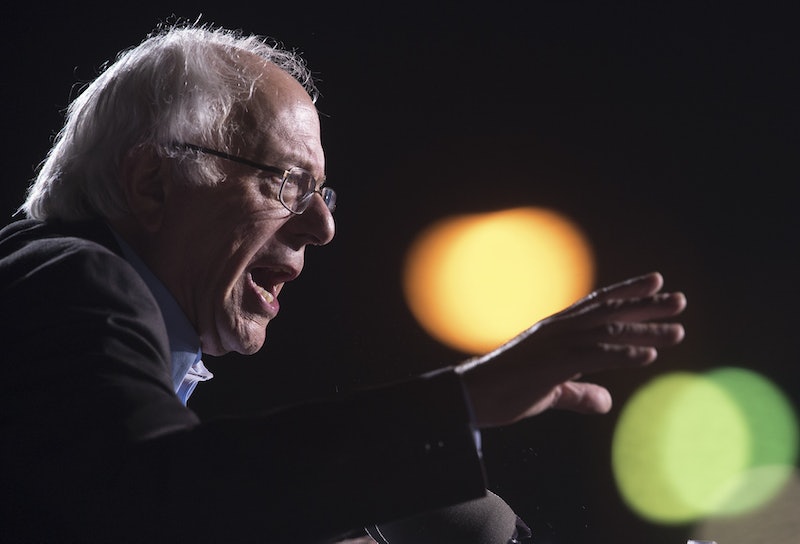 Bernie Sanders' campaign has ignited a grassroots movement nationwide that could put the fear of God in frontrunner Hillary Clinton's White House run. With his curmudgeonly attitude toward Wall Street and ability to make millennials #FeelTheBern, Sanders could be a one-of-a-kind leader in the Oval Office. He'd also be the first Jewish president of the United States. When Jimmy Kimmel asked Bernie Sanders about his religion during Wednesday's episode of Jimmy Kimmel Live!, the Democrat made a great point about where all Americans, and really every human being, should be when it comes to spirituality.

Sanders rarely discusses his personal life, and if there's one thing you should take away from his Democratic debate appearance, is the man likes to stick to policy and to the facts. So when Kimmel asked Sanders' about his faith, you got a small sense the candidate was less than jazzed. After all, Sanders has said that though he was raised Jewish, he is not active in organized religion. But then he dropped this truth bomb that really hit at the heart of this country's religion talk.

I am who I am, and what I believe in and what my spirituality is about is that we're all in this together. I think it is not a good thing to believe as human beings we can turn our backs on the suffering of other people. ... And this is not Judaism. This is what Pope Francis is talking about, that we cannot worship just billionaires and the making of money. Life is more than that.

All religions encourage peace and prosperity for everyone, and Sanders' vision for America as a place where "we're all in this together" is exactly the kind of message that young voters want to hear. Sanders' rhetoric about Wall Street and income inequality can sometimes feel like a tired record, but put in the context of religion, they reveal a much more humanitarian side of the Democrat that you just haven't really seen before. If Doc Brown's prediction is to be taken seriously, maybe a President Sanders isn't so far-fetched after all.